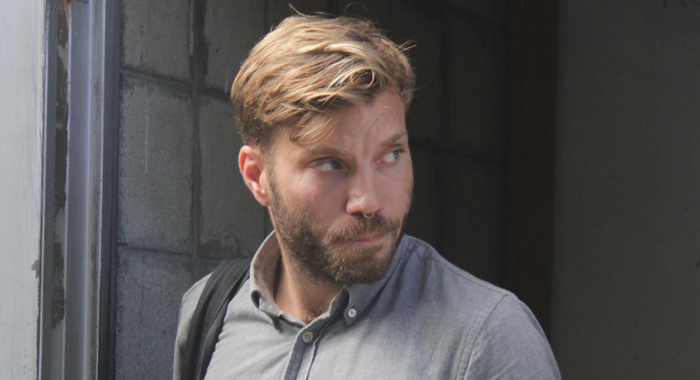 Dan Martinsen, a Norwegian, pleaded guilty to the cocaine possession charge and was sentenced to time served. (iWN photo)

A Norwegian chef was, on Monday, brought before the Serious Offences Court in Kingstown, charged with cocaine possession.

Dan Martinsen, 29, pleaded guilty to a charge that on Friday, Nov. 30, at Port Elizabeth, Bequia, he had in his possession a controlled drug, to wit, 0.30 grammes of cocaine.

The court heard that on Friday, Corporal 403 John and Police Constable 761 Pompey of the Rapid Response Unit were on foot patrol duty about Port Elizabeth.

They were dressed in plain clothes.

While the officers were walking near the home of McArthur Leach, Pompey saw Martinsen standing outside Leach’s bedroom window while another man was standing in the yard.

The police officers kept the man under observation and Pompey saw Martinsen collect something through the window.

At this point, Pompey pointed his flashlight toward the defendant and turned it on.

The man who was standing in the yard shouted, “Police!”

At this point, Martinsen dropped an aluminium foil wrapping to the ground.

When the police retrieved the wrapping, it was found to contain a whitish substance resembling cocaine.

When cautioned, Martinsen replied, “That is not mine.

The man was arrested and charged.

Martinsen pleaded guilty to the charge when he appeared before Chief Magistrate Rechanne Browne.

In mitigation, Martinsen said he had had quite a few beers.

He said a man had approached him and asked him if he wanted to buy something but that he had no intention of doing so.

Martinsen told the court that he was really sorry for his action.

“I am really not that bad of a guy,” Martinsen said.

Browne told Martinsen that while St. Vincent and the Grenadines welcomes persons to visit and enjoy the country, visitors must also obey the laws of the country.

She noted that he had pleaded guilty at the first opportunity and had no previous convictions in the jurisdiction.

The magistrate further noted that Martinsen had spent the weekend in custody and, therefore, sentenced him to time served in custody.

8 replies on “Norwegian chef charged with cocaine possession in Bequia”