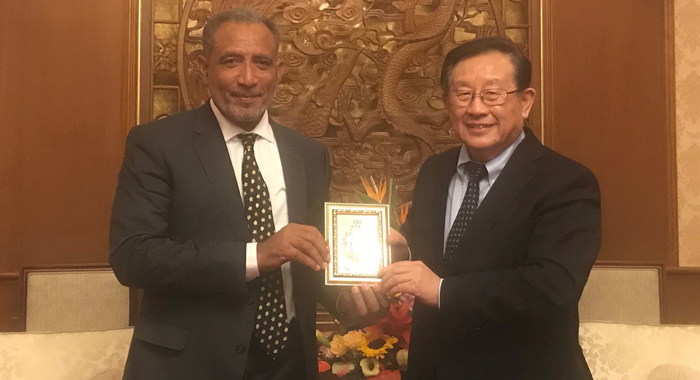 Leader of the Opposition Godwin Friday says he recently led a delegation from his New Democratic Party (NDP), the main opposition party in St. Vincent and the Grenadines (SVG), on a visit to Beijing and Shanghai, where they held talks with officials of the China Zhi Gong Party.

The visit comes two years after the NDP announced that, if elected to office, they will cut diplomatic ties with Taiwan — which Beijing considers a wayward province — and establish formal links with China.

Friday told a press conference in Kingstown on Wednesday — the 43rd anniversary of the founding of the NDP — that his delegation included Arnhim Eustace, Member of Parliament for East Kingstown, who announced the change in NDP policy towards China in August 2016, when he was NDP president and opposition leader.

The delegation also included Member of Parliament for the Southern Grenadines, Terrance Ollivierre, and Benjamin “Ben” Exeter, who was the NDP’s candidate in Central Leeward in the December 2015 general election.

Friday said that the China visit saw his delegation meeting with ministers and officials of the China Zhi Gong Party in Beijing and Shanghai.

“There, we discussed the possibility of investments in St. Vincent and the Grenadines, including teaming up with local entrepreneurs to invest in any sector of our local economy. We believe that investment is needed in the country to help spur economic growth and to bring employment for our people, especially among the youth of St. Vincent and the Grenadines,” Friday said.

The China Zhi Gong Party — translated into English as China Party for Public Interest — is one of the eight legally recognised political parties in the People’s Republic of China that follow the direction of the Communist Party of China and are represented in the Chinese People’s Political Consultative Conference, Wikipedia says.

The online encyclopaedia further says the party appears to be used as a convenient intermediary for contacts with certain foreign interests.

Friday said the NDP believes that foreign direct investment will be crucial to pushing the economy of SVG to the next level.

“It is something that many of our neighbours in the Eastern Caribbean countries are pushing to their advantage, and we should also have that vision.”

The opposition leader said that foreign investment in SVG must be “a win-win scenario where local businesses and citizens benefit, along with the investors.

“That is the NDP approach. So we must attract foreign investment while promoting the economic interests and well-being of our people. That’s our primary mandate. We must always ask how do we benefit from it”

He said that in China, the NDP team discussed investments in agriculture, fisheries, tourism and technological sectors.

“We also spoke about educational opportunities for our people in St. Vincent and the Grenadines,” he said.

“In both cities also, with the officials, we discussed what was termed as people-to-people and party-to-party relationships.