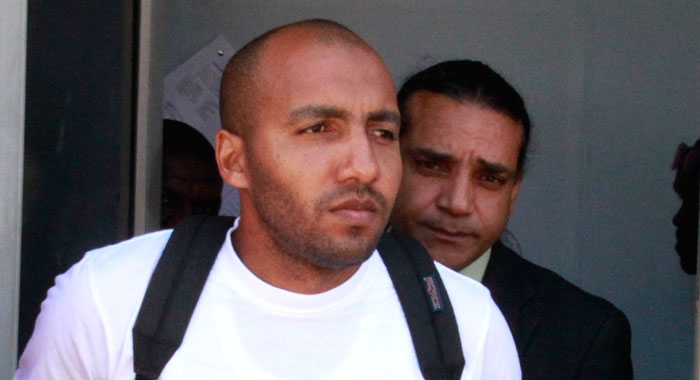 The former police officer who sprang to national attention in December 2015 after he arrested an opposition politician for possession of a licensed firearm has been found guilty of possession of 62 lbs of meat, reasonably suspected of being stolen or unlawfully obtained.

After a trial that traversed two magistrate’s courts over more than a year, Senior Magistrate Rickie Burnett handed down the guilty verdict on Granville De Freitas at the Kingstown Magistrate’s Court on Wednesday.

De Freitas, a 29-year-old Chester Cottage resident, was arrested aboard a minivan on July 4, 2017 as police were conducting stop and search.

The former police officer had led his own defence and had even made a no-case submission at the end of the prosecution’s case.

However, when that submission was rejected, De Freitas retained counsel Ronald “Ronnie” Marks to defend him, although he had initially said that he would offer no defence in the matter.

In mitigation, Marks told the court that De Freitas is a 29-year-old father of three children, ages 2 to 8.

He noted that the man has no previous convictions and is unemployed, but does some farming, animal rearing, and fishing.

The lawyer further argued that the subject in the case is not of substantial value and there is no reported victim.

Noting the very charge, Marks told the court that he believes that a bond will be sufficient, or, if not, a small fine.

The magistrate at this point inquired about the maximum sentence for the offence, and noted that it is six months imprisonment.

Prosecutor Sergeant Renwick Cato, who had been briefed by his colleague, Prosecutor Delroy Tittle, who had presented the Crown’s case, noted that De Freitas was charged with unlawful possession of meat.

Cato noted that De Freitas is a former police officer, adding that as simple as the maximum six-month sentence sounds, the charge, in his opinion, is a serious one.

He noted that it is for the simple fact that no report of theft of an animal was made that De Freitas was only charged with unlawful possession.

The prosecutor said that police officers, former or current, ought to set examples for others in the community.

He said that the court must send a message to the public to show that offences of that nature will not be tolerated and are unacceptable.

Cato said that, of late, these offences are more common in St. Vincent and the Grenadines.

And while noting that De Freitas was not charged with theft, he said that farmers in SVG are suffering because of the persons who are “not planting but want to reap”.

“The public is depending on the court to assist and the court must send a message to lawbreakers in St. Vincent and the Grenadines to show them the court’s stance and position,” Cato said.

As Cato was completing his submission, Tittle, who had gone to the Serious Offences Court returned to the Kingstown Magistrate’s Court and Cato asked the court to permit him to say a few words as he had prosecuted the matter.

Tittle began his submissions by saying that one of his concerns if that there is a farmer who has lost a young bovine and will never be compensated.

However, Marks objected, saying that his client is not charged with theft.

But the magistrate noted that the evidence presented in court was that an animal was found slaughtered with only the skin and bones left behind.

Tittle further noted that the meat was found to be beef and told the court that the offence with which De Freitas is charged is serious and the court must send a strong message.

The prosecution noted that while Marks said that there was no owner of the animal presented to the court, people live by the produce they plant or animals they rear.

But Marks said that prosecutor Cato had made an excellent point when he said the offence is not theft, but erred when he said it is a serious offence.

“Parliament does not agree,” Marks said, adding that one can be sentenced, at the High Court, to up to 14 years for theft, but the lawmakers set at six months the maximum sentence for possession of items suspected to be stolen or unlawfully obtained.

He further said it is unfair to clothe De Freitas in a uniform that he has surrendered.

“It would be a far different cry if he was a police officer,” Marks said, adding that this should not be used as an aggravating feature.

But Tittle noted that there was a matter involving produce at the Georgetown Magistrate’s Court and the defendant was sentenced to the six months’ maximum, even after pleading guilty.

But Marks said that no magistrate would sentence an accused to the maximum sentence after the defendant pleads guilty.

He said he was so confident of the assertion that he would put his head on the block.

“You will lose your head,” counsel Israel Bruce, who was at the bar table but was not involved in the matter, told his colleague.

“Pull back yuh head,” counsel Grant Connell said from among the audience.

After hearing the submissions, the magistrate said he did not think that De Freitas should be sent to prison. Burnett, therefore, ordered the man to pay the court EC$1,500 by March 15, 2019 or spend three months in jail.

De Freitas sprung to notoriety on Dec. 29, 2015 for helping to arrest, in Kingstown, opposition politician Benjamin “Ben” Exeter, after police officers realised that Exeter had a firearm on his person.

Exeter was, at the time, the holder of a licensed firearm and his license was later revoked.

In November 2016, Burnett dismissed charges that were brought against Exeter and Shabbazaah George, an opposition student activist who had also been arrested.

De Freitas quit the police force some time after arresting Exeter, saying during Exeter’s trial that he had opted to become a fisherman.