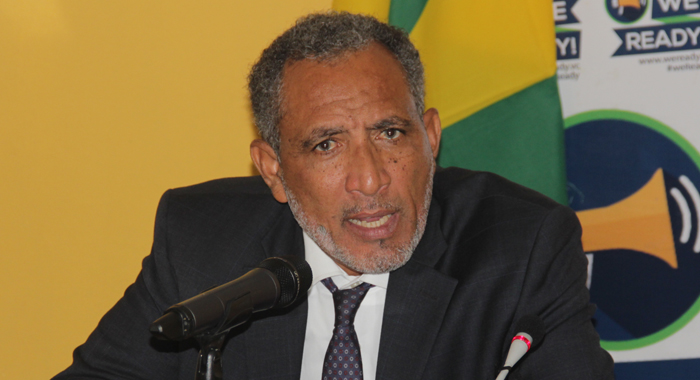 The opposition New Democratic Party says it is holding the High Court to the Feb. 11 trial date Justice Esco Henry set, last Friday, for the next hearing in the election petitions, although she later recused herself from the matter.

“It’s been put to Feb. 11, that is the date we are holding the court to,” opposition Leader Godwin Friday told an NDP press conference on Wednesday, one day after Justice Henry’s recusal.

“Our commitment to these petitions will not wane,” he told an NDP press conference in Kingstown.

The opposition leader said the NDP is going to urge that Justice Henry’s replacement be selected expeditiously within the context of the Court of Appeal’s order that the petitions be heard expeditiously.

He further said that the NDP is urging that the new judge “essentially be tasked to deal with this petition so that the matter can go forward as quickly as possible so we can meet the Jan. 24 next hearing date and the Feb. 11 date for trial.

“It is unconscionable that a matter of this importance that it seems that it is only the petitioners are urging anxiously that the matter be tried,” Friday said.

“We will not rest on it. I promise you that because it is too big, it is too important, there is too much at stake for us to simply say that this is just another matter of sour grapes.

“We know there is evidence that illegality went on in the election, based on the design of the ballots. But there are many other things that happened that were not in accordance with the best practices for conduct of elections, and that’s putting it mildly,” Friday said, noting that election observers from the Organisation of American States noted this.

“So we need to have this matter dealt with and we will continue to urge and push and put whatever means we can, legitimately, to get these matters to a trial and let the people of this country know what happened in the election so that even when the elections are called again, they don’t go in not knowing what to expect.

“When you don’t have legitimacy in the electoral system, people adopt other means of settling their disputes. We don’t want that to happen in St. Vincent and the Grenadines. We urge all the parties to cooperate and to ensure that his matter gets to trial as quickly as possible,” Friday said.

The NDP has brought two petitions challenging the announced result that the Unity Labour Party won eight of the 15 seats in the December 2015 polls to secure a fourth consecutive term in office.

The NDP won the remaining seven seats and Friday noted that the situation is not that one seat might not make a difference to the government.

The NDP’s Lauron “Sharer” Baptiste and Benjamin Exeter are challenging the election of the ULP’s Montgomery Daniel and Sir Louis Straker in North Windward and Central Leeward.

Friday said the cases are not just a matter for Baptiste or Exeter or for him as leader of the NDP.

“This is a matter for the whole country. This is a matter for the Caribbean. We have had this creeping erosion of democratic rights in the Caribbean and this is how you lose the fundamental rights that others in previous generations have fought to protect and that we espouse intellectually but when we have to actually practise them, we find it inconvenient and we find all kind of machinations to prevent the system from working the way it was supposed to.”

Justice Henry decided to recuse herself from the matter after finding out that someone had set down 12 matters for her to preside over this week, when the election petitions were scheduled for trial.

However, that hearing was adjourned to Feb. 11, 2019, based on an application on behalf of Grahame Bollers — lead counsel for Daniel and Sir Louis — who is ill.

The judge is said to have felt that she could be accused of knowing beforehand that the dates would become available.

Friday said that the latest development in the petitions is not unrelated to the failed attempts of the NDP, this year, to bring a motion of no confidence against the government.

“And that’s why anybody asking the question as to whether NDP is going to continue or whether NDP should just focus on elections coming up whenever, that is not a question for us.

He said that if the petitioners win, the government cannot claim a right to govern.

“So how you could have three years in and the government still is not legitimate because the question is not settled in the court? And for those who can, who have the means to cooperate to make sure that this matter is determined and the people can rest assured that their mandate has been properly exercised, and the people who are governing the country are entitled to do so; they can do so by cooperating to get the matter heard.”