How ‘papers’ result in killings in SVG 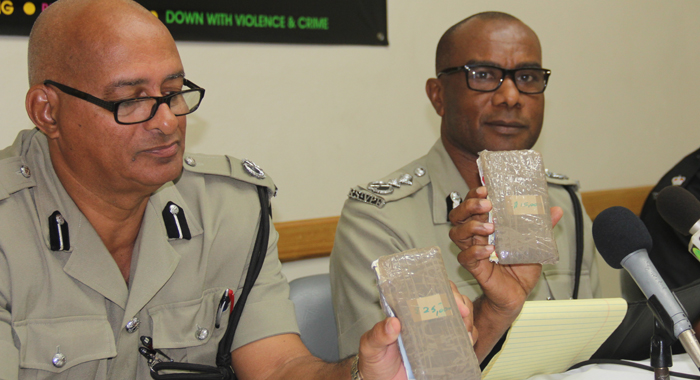 Police, on Wednesday, conducted an operation in Diamond that netted five firearms and scores of rounds of ammunition.

But amidst the findings were two packages, containing pieces of material, harmless in and of themselves, but which might actually result in criminals turning their guns on each other.

The police found two taped packages, which they also displayed at press conference at police headquarters in Kingstown, along with the guns, ammunition, and facemask.

“If you look on this package, you will see what is written on it in figures, which is $15,000. But when you open the package, this is what is in the package,” Deputy Commissioners of Police, Frankie Joseph said, revealing pieces of paper cut to about the size of a bank note.

Joseph said police believe criminals used the taped packages to deceive other criminals from whom they are purchasing illegal items, such as drugs or ammunition.

He said he believes that the deception contributes to acts of reprisal.

“Even though they are involved in illegal activities, they are expecting to be paid,” he said.

“And they are expecting to be paid legitimate monies, and, if on their findings, they realise that it is not money [but] it is paper, then you have to expect these reprisals.”

Joseph said police have had information for years that one of the reasons why there are so many illegal firearms in SVG is that persons barter marijuana for illegal firearms.

Wednesday’s cache is made up of two 12 gauge shotguns, one MK1, one 357 Magnum pistol, and one Glock 23 pistol. There are also 56 rounds of 5.6 ammunition, eight rounds of Glock ammunition, and 6 shotgun rounds.

He said that police have conducted operations in the mountains and know that marijuana growers work hard.

“And can you imagine them receiving paper in place of genuine currency? Hence … we are seeing so many gun-related offences and it increases our homicide rate per year,” the chief detective said.

Superintendent Richard Browne, who is responsible for crime-fighting, said police cannot say specifically where the weapons originate from.

“We don’t have any idea where they came from, but in relation to the MK1, that is a US-made weapon and for a person to own such a weapon in the US, they have to have a federal firearms licence.”

“What we do know, [is that] none of those weapons were manufactured in St. Vincent and the Grenadines.”

6 replies on “How ‘papers’ result in killings in SVG”