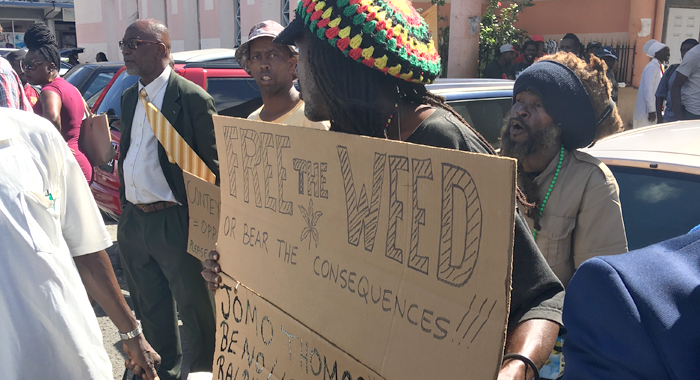 As the debate was about to begin on Monday, Prime Minister Ralph Gonsalves told lawmakers members of the Rastafarian community made “very strong representation” at the select committee that the government not to proceed with this piece of legislation.

The “Permitted Use of Cannabis for Religious Purposes Bill 2018” was not among the marijuana reform laws that Parliament debated and passed this week.

“And they gave cogent reasons as to why we ought not to proceed with it. Reasons resident in their own philosophy and their practical assessment of circumstances.”

Gonsalves said that the Rastafari said that as a result of their“philosophical approach, their Livity”, the state cannot accord them the right to practice their sacrament, as this is a right that belongs to them .

Gonsalves said the group posited that the state had been coercive in implementing the law and that they suffered, were fined, and, in some cases, jailed, and they continued their practice of using marijuana as a sacrament.

“So that was their philosophical transcendental point,” the prime minister said, adding that the second reason for the Rastafari objection was“of a more practical nature”.

“That is, they realise that given the status of the International Narcotics Conventions, that the International Narcotics Board out of Vienna, Austria may come to see how this bit of legislation is working and they don’t want to have any international body coming to see how they are conducting themselves in their tabernacles and that they were satisfied that the existing regime of tolerance where, for a decade or so, that the state has not intervened or interfered with their worship and the use of their sacrament, that in all the circumstances that they will wish us not to proceed with this particular bill and we accepted at the select committee the cogency of . Of course, this is a matter for which there would be further discussion, prime minister said

He said Parliament would then proceed with the Medical Cannabis Industry Bill and the Cannabis Cultivation Amnesty Bill — which lawmakers went on to pass into law amidst objections by the opposition that they did not go far enough to preserve the interest of traditional farmers.

The opposition also called for the of small portions of marijuana for recreational use.