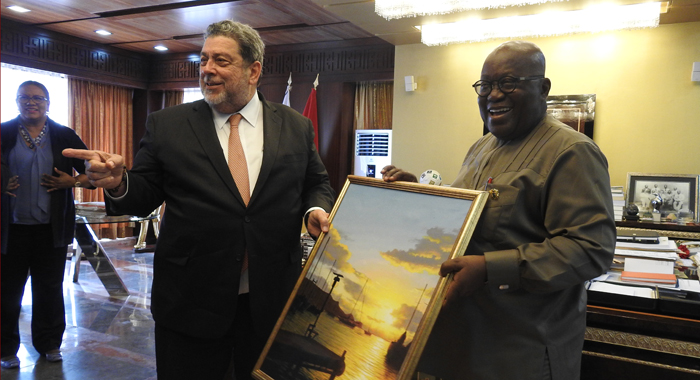 Prime Minister Ralph Gonsalves says that during his recent trip to Ghana he proposed to that country’s president, the establishment of  “an ABCD Commission”

“Africa, Brazil, Caribbean, and Diaspora Commission for matters of trade, economic linkages, education, health transportation — air and sea,” he said Sunday at the 23rd national convention of his Unity LabourParty on Sunday.

He said that persons might ask where he is going with such an idea.

Gonsalves noted that Africa has 1.3 billion people in 54 countries andBrazil has a population of 210 million, adding that Brazil is the closest place to Africa.

He further said that half of the population of Brazil are of African descent.

The ULP leader said that he defines the Caribbean as the 25 countries washed by the Caribbean sea, including the South American mainland and countries such as Mexico, Columbia, Venezuela, Panama, Costa Rica, Nicaragua, and Honduras.

He said that all together that is 1.7 billion people.

“I am not saying we must not have the links with America, and Canada and Europe and Asia, China and India. But this is an area of functioning, which we must build — the ABCD Commission.

“And the president of Ghana embraced the initiative and asked me to follow through on it with the other countries in this particular ABCD Commission,” Gonsalves said.

Gonsalves paid a five-day official visit to Ghana last month, during which he discussed matters with President Nana Addo Dankwa Akufo-Addo as well as held discussions with several government ministers including Afriyie OwusuAkoto, the Minister of Food and Agriculture and the Minister of Tourism, Culture and Creative Arts, Catherine Afeku.

During his visit, Gonsalves also delivered a lecture titled Rebuilding the African-Brazil-Caribbean Movement for Trade, Cultural and DiplomaticEnhancement at the University of Ghana.