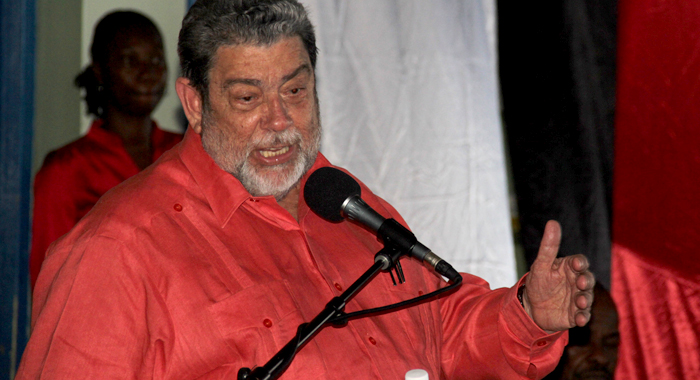 Prime Minister Ralph Gonsalves wants Opposition Leader Godwin Friday to say who paid for his recent visit to China along with three other members of the main opposition New Democratic Party (NDP).

“Friday must say who paid for the airfare. Who paid for it? I know of the travel economy. He must say if he business or first class,” Gonsalves told the 23rd national convention of the ruling UnityLabour Party in Campden Park on Sunday.

At a press conference in Kingstown last week Wednesday, the NDP leader said whilst in China “recently”, his delegation met, in Beijing and Shanghai, with ministers and officials of the China Zhi Gong Party.

“There, we discussed the possibility of investments in St. Vincent and the Grenadines, including teaming up with local entrepreneurs to invest in any sector of our local economy. We believe that investment is needed in the country to help spur economic growth and to bring employment for our people, especially among the youth of St. Vincent and the Grenadines,” Friday said.

The trip came two years after then opposition leader Arnhim Eustace announced that the NDP no longer Taiwan as a country independent of China.

Gonsalves says his ULP government is committed in its recognition of the self-governed Taiwan as a nation, independent of China.

China regards Taiwan — which has diplomatic ties with 18 countries –as a renegade province and has not ruled out the use of force in its reunification quest.

The prime minister told Sunday’s convention that Friday must also say how much each airline ticket cost and who paid for them.

He wanted Friday to say, specifically, whether the tickets were paid for by the NDP or “men in China who want to sell economic passports”.

“A business class ticket to China ain’t easy money. Their passage alone is several tens of thousands of dollars,” Gonsalves said, adding that the NDP must say whether, as a political party, they got free accommodation in China.

“The NDP don’t have money to pay Douggie De Freitas, you think they have money to China,” Gonsalves said, mentioning the manager of NICE Radio, on which the party broadcasts its daytime programme.

“The player who paying for you to go to China to dance, is them calling the tune?” Gonsalves said.

He also wanted the opposition leader to say who they held talks with in China.

He noted that Friday had said that they were hosted by the China Zhi Gong Party.

He said he has nothing against the CPC, but if the opposition is going to China, they should talk to “the main man”.

“Nah mek them send you to some intermediary to sue-sue (conspire).  They keep them in the outhouse,” he said.

Gonsalves reiterated that he was not saying anything about the CPC or China.

“All I am saying, if you establishing ties with them, go and talk to the jefe,” Gonsalves said, adding that the head of the China Zhi Gong Party — with whom Friday met — was given “a little job as minister of science and technology”.

The prime minister said the NDP has more members than the China Zhi Gong Party, although China has 1.3 billion people, compared to the 106,000 in St. Vincent and the Grenadines (SVG).

The prime minister noted that neither Chinese nor Taiwanese need visas to visit SVG and further noted that there are more mainland Chinese than Taiwanese in SVG.

“Mainland Chinese are not dotish (doltish). They call themselves communists but they love plenty money,” Gonsalves said.

He said that SVG works together with China at the Caribbean DevelopmentBank, World Bank, International Monetary Fund, and in the Group of 77 States and China.

“But I ain’t pulling down Mainland China,” he said.

Gonsalves asked what would happen to the 70 Vincentian students in Taiwan if Kingstown cuts ties with Taipei.

“You going pay for them? Because the Taiwanese would say, you don’t have any relations with us anymore. Take back your students.

“And anytime you have a break in the relations, these things happen. Fool ah talk, fool a listen,” Gonsalves said.