Gonsalves says he heard tape of man plotting to kill him 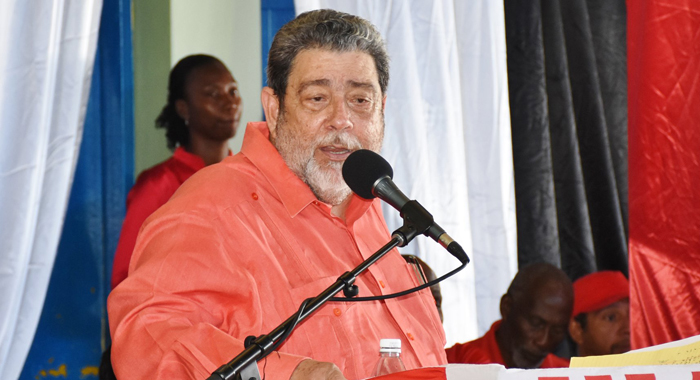 Prime Minister Ralph Gonsalves says he has heard a tape of a Vincentian man trying to contract someone to kill him.

Gonsalves, however, did not say, whether any charges were ever brought against the man, whose voice he said he recognised.

On Dec. 9 at Campden Park, the prime minister told the 23rd annual convention of the Unity Labour Party of the plot.

Gonsalves has over the years spoken publicly, including in Parliament, about what he said were plots to assassinate him.

He, however, told party supporters that he had never before spoken publicly about the assassination plot that he revealed to ULP supporters at the convention, where he would be re-elected as leader of the ULP.

“The other day, some NDP people on radio were celebrating a man who has been to jail in St. Vincent and the Grenadines for all sorts of thing,” he said.

“You know, they start this thing over 10 years go. There is this fella who the NDP wants to proclaim as some kind of a gorgon. The security forces come to me one day with an allied agency from overseas. They said that so and so was recruiting a Puerto Rican to kill you.  And the person who was doing it was a man from the Dominican Republic whom the security agency overseas was tracking because he had been in jail in New Jersey and had been deported to the Dominican Republic.”

Gonsalves said he told both police in St. Vincent and the Grenadines and the overseas agency that they watch too many spy movies.

“They said, ‘Prime Minister, we are serious.’ And the agency from overseas played a recording and I heard the voice of the man from St. Vincent telling the man from the Dominican Republic, ‘Yes I hear about that man from Puerto Rico. I heard that he does do a clean job. I want him to do a clean job on Ralph,’” Gonsalves said.

“They are getting desperate,” Gonsalves said. “You see, it not easy to be in opposition for 18 years and they going to be there for 20 and then for another five you know,” Gonsalves said to cheers.

Gonsalves made the revelation as he spoke about information he said he collected during a recent trip to England about people who want to buy SVG citizenship and passports.

He said these persons are financing an on-going campaign to get rid of the ULP.

“It is now no longer an issue that they want to get rid of Ralph and the ULP in order to get St. Vincent passport and citizenship to sell. They still want that. But they say they want my scalp. It is now a personal matter because the ULP stop them from winning in 2001, and we stopped them and SCL in 2010 and in 2018.

“So, I spoke to people who spoke to the people in SCL and spoke to the people who want to sell our passports and they say that the main man say that in relation to Ralph now it’s personal. Well, I have long suspected that. Long suspected that. Well, they will get another chance again and there are some people, some financiers of the NDP, some crazies in the NDP, some fanatics, they want not just to remove Ralph. They looking for anything anywhere, they want to jail Ralph and I am telling you some even want to kill Ralph. I am not saying that lightly.”

He said that the people would not allow the NDP to beat him in an election.

“Yuh cyar jail me because I ain’t doing anything wrong. In any case, you can’t jail me, is a court will have to jail me.  And since ah ain’t doing nothing wrong, illegal, you ain’t going get no chance. You can dream. But, I am mortal and yuh could get me,” the prime minister said.