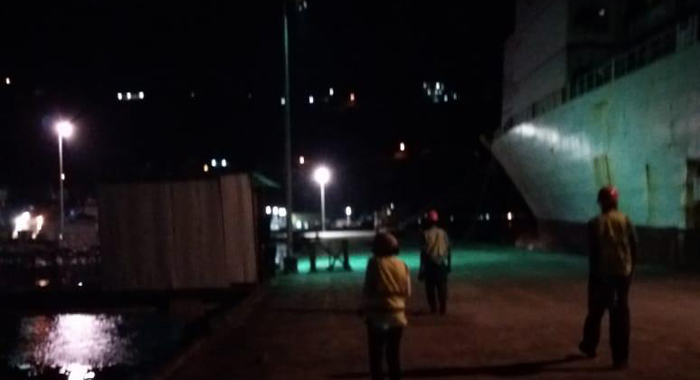 A Port Authority worker has told iWitness News that poor lighting is a safety hazard at Port Kingstown.

A worker at Port Kingstown has complained to iWitness News about what they say is a safety concern at the facility: the absence of adequate lighting.

The worker, who asked not to be identified in this article because of employment status, said that the situation has existed for over two years.

The worker provided iWitness News with videos and photos of the port compound at night, which seem to support their claims.

However, Bishen John, chief executive officer at the Port Authority, told iWitness News on Wednesday that he was not aware of such a situation.

iWitness News told John that the worker claimed that the situation has existed for more than two years and that there are no lights at the container park, a section of which is bounded by Back Street, opposite to Layne’s Department store.

The worker told iWitness News on Tuesday, New Year’s Day, that there is a lack of lighting on the pier at the port.

“This is basically a health and safety issue because a lot of things can go wrong, people can get injured, even killed,” the worker said.

“The poor lighting is on the wharf, inside on the compound where they store the containers and also over by the container park, close to the bus stop right opposite Layne’s

“There is absolutely no lighting there at all. The only set of lights we have there is from the street lights…

“This has been going on for over two years – maybe more.”

The worker told iWitness News that while the Geest Line is the only containerised vessel that operates at Port Kingstown, at night the situation is still dangerous.

The workers said that during their operations at the port, crane operators for various ships, while discharging containers, would sometimes hit the light poles into the sea.

The worker maintained that if the ship destroys all the lights, the pier cannot be left in darkness.

“So you basically would have to put back up all the lights, and if it is a situation where it is costly for you (Port Authority), you then send the bill to the agent and say your crane operators licked down the lights and you have to pay for it.

“Even in years gone by, these things used to happen under different management and they would put back up the lights and they would even give us two bulbs, each shining in opposition directions.

“But now, when they put back up the bulbs, they’re only giving you one, which is making the pier dark.”

“Anybody could easily hop over the fence, because there is no security guard there, no port police, so anybody could easily walk with a bull cutter, cut off the seal and tamper with the goods and it would be hard to recognise a face because over there is completely dark.

“But it is not an issue to say goods are being stolen or stuff like that,” the source said, adding that their main concern is safety.

“Because anybody can get injured. And they will wait until somebody get injured and then they will put up the lights. But why does it have to take someone getting injured for you to basically put up some light? And this is a port.”