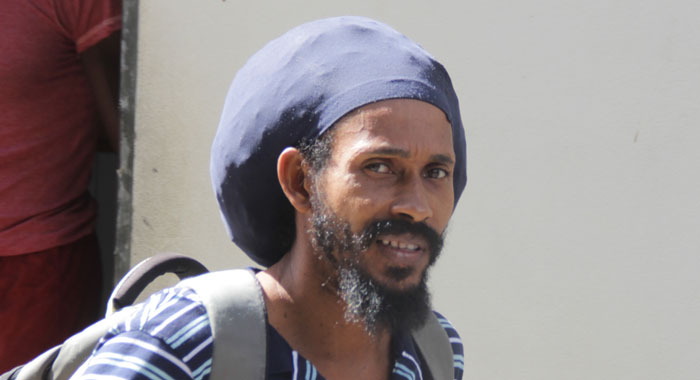 The man who spent Nov. 28, 2018 to Jan. 2, 2019 in court-ordered hospitalisation at the Mental Health Rehabilitation Centre was, on Wednesday, allowed to plead to three traffic offences, while two others against him were dismissed.

Chief Magistrate Rechanne Browne had ordered, on Nov. 28, 2018, that Hezekiah Naphtali, of Kingstown, undergo psychiatric evaluation after he refused to plead to the charges at the Serious Offences Court.

But on Wednesday, after hearing the submission of counsel Michelle Fife — who had replaced Jomo Thomas as Naphtali’s lawyer — and consulting with health personnel, the chief magistrate allowed Naphtali to plead.

He pleaded guilty to a charge that on July 28, 2018 at the Grenadines Wharf in Kingstown, being the driver of motor vehicle PD139, he did use the vehicle without the relevant licence in respect of the said vehicle for the period April 1 to Sept. 31, 2018.

Naphtali also entered a guilty plea on the charge that on the same date and place, he used the same vehicle without there being in force a policy of insurance in respect of third party risk in respect of the said vehicle.

A third charge was that Naphtali did drive the said vehicle without being the holder of a driving permit.

He also pleaded guilty to that charge.

Naphtali, a national of St. Vincent and the Grenadines, had claimed that he is a Moor and cannot be made to appear before a court in the jurisdiction because he is “sovereign”.

On Nov. 28, when he appeared before the Serious Offences Court, Naphtali, who did not have a lawyer, told the court that that appearing before a court in SVG is a violation of his indigenous rights, as SVG is “a colony”.

On the Dec. 19 appearance, the court was presented with a report from the psychiatric hospital, saying that he was unfit to plea — months after the same healthcare facility had cleared the man for trial.

Thomas, who was Naphtali’s lawyer then, questioned the process through which the Mental Health Centre came to its conclusion, saying that the psychiatrist evaluated his client for less than 15 minutes.

The lawyer further noted that when Naphtali was evaluated months ago, the same centre said that he was fit to plea.

At the Dec, 19 hearing, in keeping with the report, Burnett ordered that Naphtali return to the psychiatric hospital and reappear before the chief magistrate today – Jan. 2, 2018.

When Naphtali’s matter was called at the Serious Offences Court today, Thomas told the court that the defendant’s family had hired another lawyer and he (Thomas) wanted to be removed as counsel on record for the man.

Lawyer Michelle Fife then went on record as the man’s lawyer.

Fife told the court that she understood that another psychiatric report on her client was to be prepared but no timeframe had been given.

The chief magistrate said that this was also of concern to her.

Fife then told the court that she was made aware that the doctor who was supposed to prepare the report had returned to the state and would do so soon.

She said that she was concerned about the psychiatric report that had been prepared by one Dr. Adams and that she was asking that the court subpoena that report.

Senior Prosecutor Adolphus Delplesche told the court that he had not seen the report.

The chief magistrate said that Naphtali’s initial contact was with Dr. Adams, and said she had not seen the report on the accused man.

Browne further noted that the matters have been going on for some time and was cognisant that Naphtali had been institutionalised for some time.

Fife told the court that her client has no history of physical violence or of threatening anyone.

She further pointed out that he has three children who depend on him as well as his wife.

The lawyer further pointed out that the offences are traffic offences and that her client was being held on remand.

She said that she was able to explain to Naphtali the difference between international law — under which he claimed he is exempt from paying licences and other taxes — and domestic law.

Fife said that her client demonstrated an understanding of the difference and that she was asking the court to allow him to plead to the charges.

The chief magistrate said that she would first like to speak with the medical personal and would take a course of action, based on their advice.

After rising for a few moments, the chief magistrate said that it had since come to light that Naphtali had similar matters before the court, dating back to 2017.

She said that she would take those matters off the list.

‘not to be subjected to taxes and fees’

In mitigation, Fife told the court that when given a change to plead, he didn’t waste the court’s time and pleaded guilty.

She said he is a member of an indigenous group and religion — “Moabite”.

She said that one of the fundamental principles of his beliefs is that he is not to be subjected to taxes and fees.

She said the group is recognised by the United Nations, but not in St. Vincent and the Grenadines.

The lawyer said that while Naphtali’s religion causes him to observe certain beliefs, he recognised that he must obey the requisite laws while resident in St. Vincent and the Grenadines.

She said he now grasps the distinction between international human rights and the right to drive in the place where one lives.

The lawyer said that Naphtali is now willing to comply with all the traffic laws, rules and regulations.

The lawyer said that while she is mindful that the court had dismissed two other traffic charges against her client, he was throwing himself at the mercy of the court.

The lawyer asked that a non-custodial penalty be imposed, noting that he had been held on remand at the Mental Health Centre since Nov. 28, 2018.

The chief magistrate said that she would not impose a custodial sentence, but added that she had noted the aggravating and mitigating factors of both the offences and the offender.

He was ordered to pay the smaller amounts forthwith or spend three weeks in prison.

Naphtali left the court after paying the amounts he was ordered to pay forthwith.