Senator says ordination has no impact on her candidacy 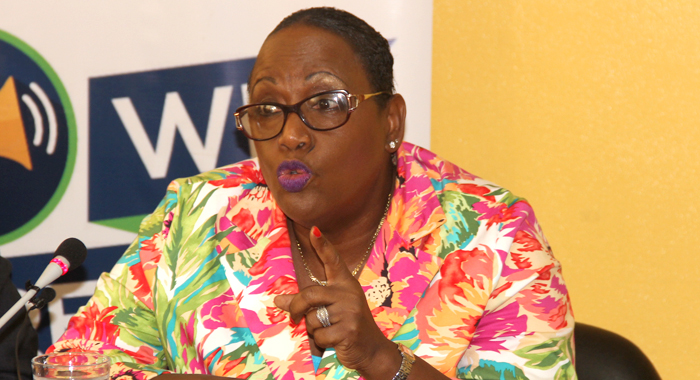 Opposition senator, Kay Bacchus-Baptiste has received an “honorary award as a “minister of the gospel”. (iWN photo)

Opposition Senator Kay Bacchus-Baptiste says that her ordination as a “Minister of the Gospel” does not prevent her from being a candidate in elections.

Bacchus-Baptiste, a lawyer, has been identified as the main opposition New Democratic Party’s (NDP) candidate in West St. George in the next general elections.

However, last week, she posted to social media a photograph of a certificate, showing that she was on Dec. 30, 2018, “ordained as Minister of the Gospel”.

Some persons began asking if the senator was opting out of politics, claiming that her ordination prevents her from becoming an election candidate.

On Saturday, iWitness News put this question to Bacchus-Baptiste, and she said:

“There are no implications. The law is very clear. You have to be a fulltime pastor before it could ever apply. That has to be your principal occupation.”

Bacchus-Baptiste said that she has been given an honorary title by Chebar Evangelical Assembly Inc., headed by Pastor Lemmew Samuel, for the work she has done with that assembly over the years.

“They say a minister of the gospel? Well, OK. But I am not ministering the gospel as such but the point is, I will help him out in his church and, as I said, it will not impact, because you have to be a full time minister, preaching at an institution before you can be disqualified, according to that.

“And, certainly, not as a senator, anyway. If you are an elected parliamentarian, that would apply…”

Section 26 of the Constitution of St. Vincent and the Grenadines speaks to disqualifications for Representatives and Senators.

The relevant subsection, says: “No person shall be qualified to be elected or appointed as a Representative or Senator if he …. (b.) is a minister of religion.”

However, the constitution goes on to say “‘minister or religion’ means any person in holy orders and any other person, the functions of whose principal occupation include teaching or preaching in any congregation for religious worship.”

“That’s what the law says, where you are actually a minister and ministering to a congregation, preaching on a pulpit. That is your principal work. My principal work is a lawyer. That’s what I do every day. And I have been doing that, nothing has changed.”

The certificate refers to Bacchus-Baptiste as “pastor”.

Asked if it means that she is actually an ordained pastor, she said, “Well, in so far as he (Samuel) has the power to do it. It is an honorary thing.

“But I am not preaching or anything. I am just working with the church, facilitating them, as a pastoral sort of help.”

Bacchus-Baptiste said she is an associate member of Chebar.

“I have been with them from their inception.  Especially the help, what I have given is organise divine principle lectures, true family value lectures, mainly that sort of teaching, character education and that sort of thing.”

Bacchus-Baptiste is a member of the Unification Church and is director of the Universal Peace Federation in St. Vincent and the Grenadines.

She said that her association with Chebar “is not a conflict at all.

“We have done many divine principle lectures in Chebar. He has been to many of our divine principle seminars. He’s been to Korea, we recently had a religious one in New York, which he attended, and he is quite au fait with the principles. So there is no conflict at all. We are a universal church and we are not excluding. We include. We are more about inclusion than exclusion.”

She said the NDP has not raised any questions about her ordination.

Bacchus-Baptiste said she assumes that the party knows and if the leadership has any questions, they would ask her.

Bacchus-Baptiste is not the only person with the title “pastor” to be involved in politics over the past two decades or so.

Conrad Sayers, who pastored a church in Redemption Sharpes, was elected parliamentary representative for Central Kingstown as a candidate for the Unity Labour Party in 2001 and 2005.

While Sayers was a pastor his main job was that of a civil servant.

And, Frederick Stephenson MP for South Windward, is/was a lay minister in the Anglican Church.