Man jailed after police find gun video on his phone 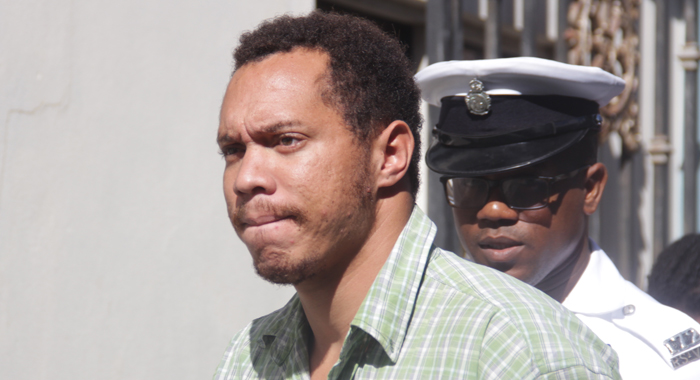 Gregory Greaves will spend two and a half years in jail for his crime. (iWN photo)

An Arnos Vale man on whose phone police found a video of him discharging a homemade gun after he gave them permission to search the device, will spend the next two and a half years in jail.

Detective found the video on Gregory Greaves’ phone last Thursday, after he had been taken into protective custody, in the face of an alleged threat to his life.

The 24-year-old mechanic then told police that he had made the firearm after his life was threatened, sometime after ending a friendship with a person of questionable character, whose identity he did not disclose to police.

Greaves was sentenced to the jail term at the Serious Offences Court today (Tuesday), one day after pleading guilty to possession of an unlicensed firearm, make and model unknown at Arnos Vale on Jan. 3, 2019.

According to the facts presented by the prosecution on Monday, the man was taken into custody last Thursday, as a result of an alleged threat to his life.

While at offices of the Major Crime Unit, he told the police that he used to be associated with a particular person of questionable character but the friendship ended some months ago.

While in custody, Greaves gave detective Sergeant Biorn Duncan of the Major Crime Unit permission to go through his cellular phone, which the officer did in his presence.

While going through the Greaves’ phone, the detective saw a video of the defendant discharging what appeared to be a shotgun.

Duncan asked Greaves about the video and the told the officer that it was a shotgun that he had made and he was test firing it.

When cautioned, the man told the detective, “Officer, I built that gun after the police told me about the threat on my life the first time. It was to protect myself.

He further told the detective that he did not have a license to keep a firearm and that the weapon was at his home.

Police later executed a search warrant at the man’s home and recovered the weapon, which a police firearm specialist found to be in working condition.

He told the court that he had made the weapon because of a threat to his life.

Senior Prosecutor Adolphus Delplesche asked for an adjournment of the sentencing to allow him to consult with the acting Director of Public Prosecution, Sejilla McDowall.

At Tuesday’s sentencing, Delplesche told the court that he had had extensive and in-depth discussion with the DPP about the case.

He said that there was no question that an offence had been committed and that the only dispute was the penalty.

Delplesche told the court that the defendant had pleaded guilty at the first opportunity and should be awarded the one-third discount on his sentence.

He said that the issue of aggravating and mitigating circumstance are for consideration by the court.

The prosecutor said that in keeping with precedence, the offence should attract a custodial penalty.

Chief Magistrate Rechanne Browne noted to Matthias that the maximum penalty for the offence was seven years in jail or a fine of EC$20,000 or both, but noted that each case must be taken on its merit.

She told him that before sentencing him, however, she would review other cases that had come before the court and the decision of the Court of Appeal.

When the matter resumed, the chief magistrate told Greaves that the Court of Appeal has noted that there are too many gun crimes in St. Vincent and the Grenadines and that the court has a responsibility to protect society and should deal with firearm matters accordingly.

She noted that it was his first offence and that the Court of Appeal has said that priority must be given to rehabilitation.

The magistrate, however, noted the case in which Kishorn Jackson who was charged in similar circumstances, had also pleaded guilty at the first opportunity and was sentenced to five years in jail.

The Court of Appeal reduced that sentenced to three and a half years.

She said that in Greaves’ case, she found no aggravating factors, adding that he had expressed remorse, which was further manifested through his cooperation with police in their retrieval of the firearm.

Regarding the aggravating factors of the defendant, the chief magistrate said that Greaves had offered no further assistance to police regarding the person of questionable character.

Mitigating factors, in this regard, included his age, and the fact that he has young children.

She told him that that she had also considered the threat to his life and the fear that he was acting on.

Browne said that she had begun with a notional sentence of four years in prison, but reduced it to two and a half years after considering the aggravating and mitigating factors.

“It is quite unfortunate but I had to be guided by the statute and the precedence,” she said after sentencing the man.