Public sector unions to meet with PM amidst protest plans 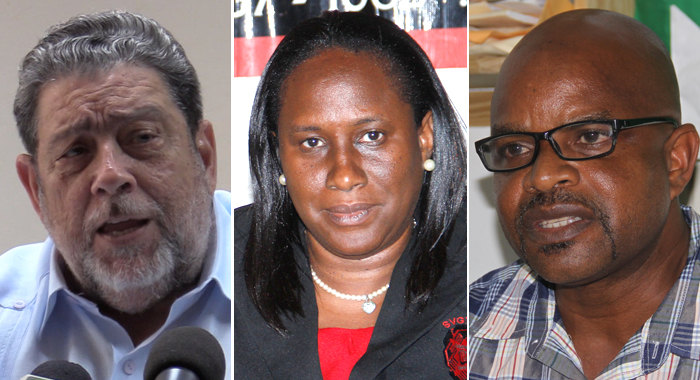 The Public Service Union (PSU) and the St. Vincent and the Grenadines Teachers’ Union say they have accepted a late invitation by Prime Minister Ralph Gonsalves to meet on Friday to discuss labour matters.

The invitation, which was sent to the unions on Monday, came amidst plans by their executive to stage a demonstration outside Parliament on the opening day of the budget session scheduled for Jan. 29.

“Well, we are going in with an open mind and we will let you know what happens on Friday,” President of the Teachers Union, Wendy Bynoe, told a joint press conference held in Kingstown by her union and the PSU on Tuesday.

She said the picket that is being planned to coincide with the presentation of the budget will include executive members and the leadership of Teachers’ Unions and the PSU.

The unions are inviting anyone else who has an interest in pension reform or the issues to participate.

“But we are starting first with the executive members of the both unions,” she said.

“We just decided that we will do the executive for now, “ she further stated, adding that a committee meeting is slated for Wednesday and after that, the union will inform its general council.

No response to salary hike proposal

“Of course, we haven’t had any talks on those. But we are remaining here for now until we can get some negotiation going.  You know in negotiations how it goes. You give some, you take some,” she said.

“The message has to be sent loud and clear. It is no longer business as usual with the trade unions in St. Vincent and the Grenadines — with the public sector unions.

“You cannot take the unions for granted as you have been doing for a number of years. Enough is enough. The unions ought to be given the respect that they deserve as the workers’ representatives. “

Bynoe said that the Teachers’ Union has highlighted the “deplorable physical conditions” that characterise some schools.

“In many instances, it appears as if the facilities are deteriorating at a rapid pace,” she said, adding that several cases have been brought to the attention of the authorities.

“To date, we are not satisfied with the overall response. We sincerely hope that efforts are made to address the Union’s concerns in this regard.”

She said that the issues the union tends to highlight fall within the ambit of the collective agreement.

“Sad to say, however, the union has been unable to get the government to come back to the table to negotiate a new agreement, despite many efforts on our part to do so.”

The current agreement was signed in 2005.

In 2008, the Teachers’ Union entered into discussions to arrive at a new agreement, however, those talks stalled and efforts to get the government back to the table have been futile, Bynoe said.

She said a salary increase for teachers “is long overdue”.

“The Union has already informed the government of our readiness to negotiate salary adjustments. However, there has been no positive response. It has been quite some time now since teachers and other public servants have received an increase in salaries and allowances. The authorities appear unwilling to engage in discussion in this regard.”

She said the unions also wish to address the issue of pension reform.

“Both unions, along with a team representing the Police Welfare Association, have taken a pro-active approach relative to this matter in as much as the government itself is grappling with it.

“However, they appear unable to arrive at a definitive position. We established a commission to look into the issue. A report is now before us with certain recommendations. However, the SVGTU will divulge the contents of the report and its recommendations after consultation with the wider membership.”

Bynoe said that her union remains  “open to frank and meaningful dialogue with the authorities on the issues highlighted”.

‘scant regard and respect’ from gov’t

Meanwhile, the PSU leader told the media that 3 per cent inflation in 2017 and 2.3 per cent as at September 2018 have reduced workers’ spending power.

He said that Minister of Finance Camillo Gonsalves has not responded to the unions’ letters and has said he would not do so as long as they are confrontational.

“But none of the letters were confrontational and we suspect that it was deliberate to not respond.

“It shows the scant regard and respect that both father and son have for the trade unions  — the Public Service Union and the Teachers’ Union, which literally ensured that they were elected into office. They rode the backs of the unions to get into office and this is the sort of treatment we get after all of that has been done. “

The PSU leader said his union has asked the government for information from the actuarial report which is being used to determine the nature of the reform of the public pension system, but is yet to receive a response acknowledging receipt of the letter.

“… the request for information was to assist us in arriving at a particular position of being informed in such manner that we can make the right decisions on behalf of our workers. We get no response from the government. Deafening silence.”

He said that even in the case of the National Insurance Services pension, “which is woefully inadequate for public workers”, that pensionable age was changed to 65 in 2013.

Boucher said that it was leaked that the union is planning protest action on Jan. 29, Budget day.

“That protest action will be taking place although the government has sent out the call for discussions on pensions and the reason why we are protesting is the total disregard for the collective bargaining process in the public service.”

He said the PSU sent a proposal to the government over eight years ago and while the union keeps asking about it, it has never seen the light of day.

“This is a labour government that has no regard whatsoever for the collective bargaining process. A process that is key to any union ensuring that their membership’s rights are looked after and their benefits are secured. The lack of response when letters are written to the government, that is another reason why we will be doing this protest.

“No acknowledgement, no intention of having any dialogue, they have literally closed the door on dialogue.”

“Our union then requested a letter of invitation along with an agenda to seek clarification. The letter was sent by email, dated 7th January 2019, and the agenda included items of pension reform and other budget issues,” Bynoe said.