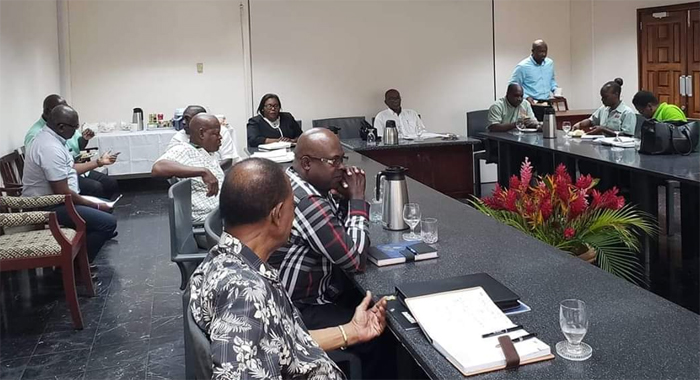 The agreement was made after talks with the National Workers Movement (NWM) and the Commercial Technical and Allied Workers Union (CTAWU), which represent mostly non-pensionable government workers.

The NWM and the CTAWU are headed by Noel Jackson and Joseph “Burns” Bonadie, both of whom are also hostsof “Shake-up” a daily programme on We-FM that is supportive of Gonsalves’ Unity Labour Party.

The agreement came in the absence of the three unions representing public sector workers, who stayed away from the talks after the security at the office of Prime Minister Ralph Gonsalves told them they had to surrender their phones before going into the negotiations.

The representatives of the Public Service Union (PSU), the St. Vincent and the Grenadines Teachers Union (SVGTU), and the Police Welfare Association (PSU) told iWitness News on Friday that they had never been asked to surrender their mobile devices before the closed-door talks with Prime Minister Ralph Gonsalves.

They further said there was no indication of this in the letter that Gonsalves sent on Monday inviting them to the talks.

Later on Friday, Gonsalves, speaking on Star FM, his party’s radio station, said that the notice had been in place when a similar meeting took place last year.

Gonsalves said the meeting was scheduled for 2 p.m.

He said that shortly before then, he was advised by his staff that the representatives from the PSU, the Teachers Union and the PSU did not want to “comply with the rules at the office when you come to see the prime minister or any meetings there that you leave your cell phones at the security”.

The unions said that there is a notice in the waiting area of the Office of the Prime Minister saying that phones must be placed on silent before entering the office.

Gonsalves, however, said there are three notices, one in the waiting area with general information and a specific one on a door before the security screening that visitors have to leave cell phones.

The prime minister, who is also Minister of National Security, said that is standard practice for years now.

He said that was in force last year also though “a member of the PSU didn’t hand over the cell phone and a transcript of that meeting was made available”.

Gonsalves said a similar rule is in force at the United States embassy, adding that even if he visits, he has to hand over his cell phone to security personnel there.

“So three of the representatives from unions refused to comply with the requirements of the security. I didn’t see them. They didn’t talk to me; I didn’t talk to them but the staff was enforcing the security arrangements and they decided that they were not going to comply.”

He said the eight representatives; four each from the CTAWU and the NWM, complied with the rule, which he said was set up by the state administration, including representatives of the police.

“So I had a meeting with the two unions which turned up,” Gonsalves said.

The prime minister said that, at the meeting, he gave an outline as to where the government is, including a historical overview from 2008 to 2013 of the economic situation, the fiscal condition of the government, broad projects and their stages of preparation and what the government intends to do this year.

He said the government delegation and the NWM and CTAWU delegations discussed the issues of wages and salaries and pension.

The two unions that attended the meeting were interested in pension as a national issue, Gonsalves said, noting that their members were not directly affected because they are not pensionable.

They raised issues about the budget and came to an understanding as to how they would proceed and they have asked that a communiqué be signed on Monday, Gonsalves said.

Workers such as teachers, police, nurses, and civil servants who are pensionable, 60 per cent of them, on average, get 2 per cent increase as a normal incremental increase, Gonsalves said.

“So if you get no increase in a year, your increment is still there.”

He said that what is important is that everybody who is pensionable gets 2 per cent towards their pension payment because it is calculated on the basis of 2 per cent for each year of 33.3 years.

“That is 66.6 per cent. That is the golden handshake that you get at the end. And it is 2 per cent for each of the 33 and one third of years. It’s significant.”

He said the PSU, Teachers’ Union and PWA lost an opportunity to participate in those discussions.

He said that if the country has security arrangements and the unions don’t want to comply with them, the work goes on.

He said that each percentage point is approximately EC$3 million.

“So that if you have the 1 per cent but it is half of the year, that is one and half million dollars.”

“What happen, you so full of yourself, you’re so arrogant, you can’t leave your cell phone to discuss matter with the prime minister. What you want to do? You want to record,” Gonsalves said.

He said a cell phone is a device that has a lot of functions that touch and concern security.

The prime minister said he does not know how the union members are going to have their members who were elected to represent them.

“You want to play politics? Well, eight other union representatives attended and held discussions…” he said, adding that talks will be held with various groups, including farmers and fishers on Friday.

He said a date will be announced for persons in the tourism sector, as well as bankers and other groups.

Gonsalves said the NWM and he CTAWU were satisfied that what the government was doing is commendable in the circumstances.

“And that’s what I will put in the budget. That’s where it is. And I will govern on behalf of the whole country.”

He said he had cautioned the PSU and teachers’ union to be careful how they conduct their affairs, lest their members think them an “aristocracy of labour”.

Gonsalves said he has a meeting with the Cabinet and technical officials on Monday, which had been called specifically for after today’s meeting.

The prime minister said the salary increases agreed at the meeting are the numbers that will be included in the budget – which the finance minister will present on Jan. 29, a day for which the PSU and teachers’ union had announced a picket outside Parliament.

He said he would talk to the PSU, SVGTU, and the PWA but not in relation to those things that were concluded today.

5 replies on “Gov’t NWM, CTAWU agree salary hike in absence of other unions”