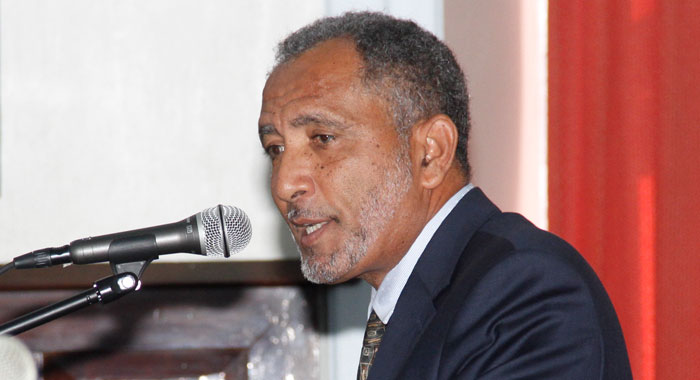 Leader of the Opposition, Godwin Friday says trade unions have the right to represent their membership the best way they see fit.

“The government still has to negotiate with the unions and I hope that they would come to the table and negotiate,” he said on Hot FM on Tuesday.

“The government tends to give lip service to the issues and to the public service- how they’re so good to them but they have never negotiated a contract with them,”

Friday was speaking in the context of last Friday’s meeting between Prime Minister Ralph Gonsalves and trade unions  to discuss salary increases and other labour issues.

The Public Service Union, the St. Vincent and the Grenadines Teachers’ Union, and the Police Welfare Association stayed away from the talks.

They took the stance after the police security detail at the Office of the Prime Minister  — where the meeting was held — told them they must hand over their cellular phones before entering the meeting room.

The union leaders said it was the first time that they had to comply with such a request.

The representatives of the Commercial, Technical and Allied Workers Union as well as the National Workers Movement attended the meeting.

Friday said that his New Democratic Party (NDP) supports the process of negotiations between the government and the trade unions.

He, however, did not agree with the government’s demand that the trade unions hand over their phones before entering the talks.

“… I wouldn’t leave my cell phone with somebody I don’t know. Ask me to turn it off — fine! I might do so, but a cell phone has a lot of information on it.

“I bet you the other side of persons had electronic devices with them as well. So if it’s good for one, it’s good for all. You can’t say you’re going to be negotiating and you have a hierarchical system where we set the terms and you just come in and sit down and just talk to us.  That’s not negotiations and that starts with the condition that you set there,” Friday said.

“If you’re going to be dealing with the issues, and you would find that maybe there is also this type of hierarchy in determining who speaks, and what they are entitled to say and at what level and so forth.”

The PSU said on Monday that the CTAWU and the NWM cannot negotiate on behalf of public sector workers.

Gonsalves has said that his government will not renegotiate the issue decided at Friday’s meeting.

One reply on “Opposition hopes gov’t continues negotiations with unions”