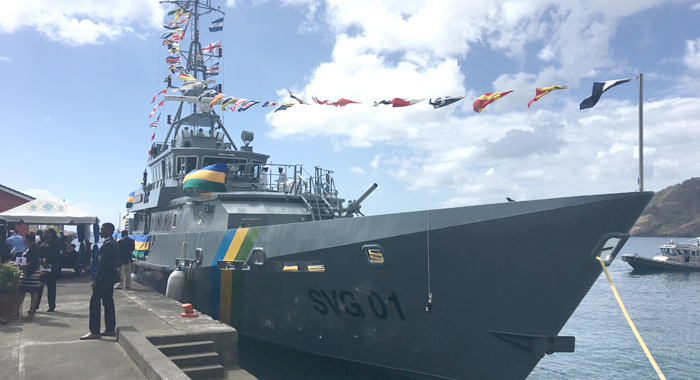 The Coast Guard vessel commissioned this week will not be used for routine medical evacuation in St. Vincent and the Grenadines.

“It’s too big, too expensive, but on occasions, depending on what happens at sea, we will have to use it,” Prime Minister Ralph Gonsalves said in Kingstown at the commissioning of the 140-foot vessel named “Capt. Hugh Mulzac” in honour of the nation’s unofficial hero.

Gonsalves, however, said he had told Coast Guard officials to look into a medevac vessel.

“But we want a medevac vessel which can also double up as a good functional coast guard vessel when we don’t have to evacuate anybody,” he said.

He said he had spoken to Damen, the company that built the Capt. Hugh Mulzac.

“They have [a medevac vessel] but what they have, our Coast Guard people say it doesn’t suit us. So, maybe if they can talk to you, maybe we may be able to do something and we prepare to buy one because at the moment, when we use the safe boats, they are not the best for medical evacuations.

“It’s like putting somebody very sick in your pickup or your Beetle motor car, as distinct from a functioning ambulance.”

The prime minister said his government would want a medevac vessel that has “all the requisite modern medical evacuation facilities: oxygen, we would need to have trained persons, nurses and the like because we are a maritime country”.

He said that some persons have said that the government should first acquire a medevac helicopter.

“Well, if something happen in the water, the helicopter going land pon’ the water? How it’s gonna happen?

“We are going to have the facilities for a helicopter you know, but the government is not going to buy one.”

He said that the acute referral hospital to be built at Arnos Vale will include a helipad.

“Hopefully, a private sector entity can come and operate one and go between here and St. Lucia and so on and so forth. But what we want to address first is a quality medical evacuation vessel,” Gonsalves said.

The government says there were some 70 medical evacuations from the Grenadines to St. Vincent in 2018.