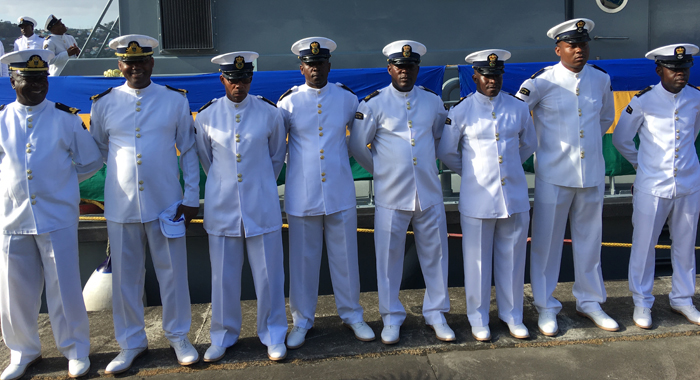 Coast Guard officers at the commissioning of the vessel. (iWn photo)

The St. Vincent and the Grenadines Coast Guard must also take seriously, crimes against fisherfolk, such as the theft of lobster from pods.

That was the message from Prime Minister and Minister of National Security, Ralph Gonsalves on Monday as he addressed a ceremony to commission Capt. Hugh Mulzac, which is now the largest vessel ever in the local coast guard fleet.

Gonsalves said that the increased airlift after the February 2017 opening of the Argyle International Airport resulted in lobster prices moving from about EC$15 for three of the crustaceans to about $25 per pound.

Now, when that happens, when it’s $25 a pound, it’s amazing how thief man get that information quick, quick,” he said.

“And as you know, thief man is basically lazy and they love to thief near, not far…

“So the lobsters, when they are caught in the sea in the lobster pods, these pots which they put down, as soon as you put them down, … thief man coming to thief lobster.

“This is a new form of theft and the Coast Guard and the police have to be mindful that in addition to praedial larceny — thieving of crops and animals on land — the thief man them now thieving lobster in the sea.

“So ah doh want to hear when the complaints are made to the Coast Guard that that is not your business. That is very much part of your business to protect people’s property and you have to have arrangements in place to protect the hardworking fisherfolk who are laying their lobster pots and you have some thief man just waiting to reap,” the prime minister said.