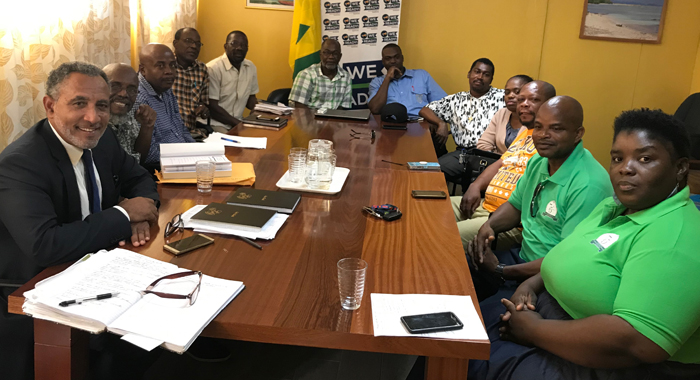 Member of the New Democratic and the leadership of the Public Service Union at the meeting in Kingstown on Thursday.

The main opposition New Democratic Party (NDP) met on Thursday with the executive of the Public Service Union (PSU) at Democrat House, the Party’s Headquarters, in Kingstown.

The party said that the meeting was convened at the invitation of Leader of the Opposition and NDP President, Godwin Friday who requested the meeting with the union “to learn first-hand about the issues it was seeking to discuss with the government, as employer, on behalf of its members”.

Other NDP parliamentarians and senior party members who attended the meeting included Member of Parliament (MP) for East Kingstown and former Leader of the Opposition and President of the NDP, Arnhim Eustace, MP for Central Kingstown and NDP Vice-President, St. Clair Leacock and MP for West Kingstown, Daniel Cummings.

“Matters discussed at the meeting included salaries, promotions and the absence of collective bargaining between the government and the union. Specially, the union noted its request that SVG ratifies ILO (International Labour Organization) Convention 151, which addresses protection of the right of public sector workers to organise and procedures for determining conditions of employment in the Public Service,” the NDP said.

“The union stated its disappointment with the government’s failure to engage in meaningful discussions with it to lead to a collective agreement. The union urged the opposition to support its call for a return to collective bargaining as a means of addressing concerns of public sector workers.”

The NDP said that the party notes  “the failure of the ULP government to engage in collective bargaining over the years must be of great concern to all Vincentians, particularly where the last negotiated salary increases for public sector workers took place in 1999 some 20 years ago under an NDP administration.

“In fact, all salary increases under the ULP government have been legislated,” the NDP said, adding that it considers it “a disgrace that a government which considers itself a labour friendly government would intentionally obstruct and disregard the collective bargaining process.

“The government should engage in respectful and good-faith negotiations with the public sector workers,” the NDP said.

The opposition leader urged the union leaders to be true to their members and to represent their interests first, the NDP said and assured then that he and the opposition would “remain engaged in the process and would seek further consultation with them”.

The NDP said it considers “the imposition of a 1 per cent salary increase by the Government as an insult and affront to the union and that it demonstrated a lack of good faith and open disregard to the unions and the bargaining process.

“In this matter the NDP stands firmly behind the unions in their efforts to represent their members,” the party said.

The meeting was the second between the NDP and a public sector union in as many weeks.

One week earlier, on Jan. 17, the NDP met with the executive of the St. Vincent and the Grenadines Teachers’ Union to get a better understanding of issues affecting teachers.

The Jan. 17 meeting came after the government agreed with the National Workers Movement and the Commercial, Technical and Allied Workers Union to a 1 per cent salary increase for the second half of 2018, 1.5 per cent for 2019 and 2 per cent for 2020.

The Teachers’ Union and the PSU and the Police Welfare Association (PSU) did not attend after being told, on arrival, that they had to surrender their mobile devices to the police security officer.

The three unions said this had never been a requirement at previous talks and neither were they alerted to the change in approach for the Jan. 11 meeting.