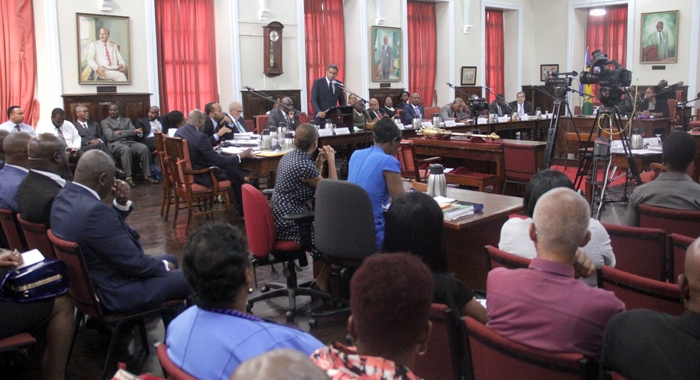 Minister of Finance, Camillo Gonsalves, on Monday, announced an increase in the excise on gasoline and diesel as well as tobacco, sweetened drinks, and landing fees at Argyle International Airport.

The minister presented the fiscal package amidst protest by the executive of the SVG Teachers’ Union and the Public Service Union over his government’s handling of matters affecting them, including salary increases.

He said that the tax measures are expected to contribute EC$8 million to the financing of the EC$1.067 billion budget which lawmakers will begin debating on Tuesday.

“These modest adjustments further this government’s practice of prudent fiscal management and people-centred budgeting,” Gonsalves said as he delivered his second budget since becoming minister of finance in November 2017.

“It is important that this revised excise, and, indeed the price of fuel in St. Vincent and the Grenadines generally remain low, relative to our neighbours in the OECS,” Gonsalves told Parliament.

He said the adjustment is expected to generate an additional EC$4.2 million for the government.

Gonsalves said the significant increase in the importation of used motor vehicles has given rise to health and environmental concerns linked to increasing levels of vehicular emissions and increased dumping of derelict vehicles and used parts.

He said that in 2018, the government reduced the age of imported used vehicles, adding that this is a trend that will continue in the future.

“We cannot continue to spend more in health care to treat respiratory illnesses as such as asthma, which is increasing in prevalence in recent years,” he said.

He further stated that the number of vehicles in the country had grown exponentially over the last decade.

This, Gonsalves said, places tremendous pressure on the road network, hastening the deterioration of the service of the nation’s highways and secondary roads.
The finance minister said there are over 32,000 vehicles on the roads of St. Vincent and the Grenadines and, notwithstanding the increased government spending on road repairs and rehabilitation, the calls from the public for even more spending on the roads are quite evident.

He said that the excise on petroleum products was in response to these demands for spending on roads, healthcare and environmental protection.

The finance minister announced that the excise on water, including mineral waters and aerated waters, containing added sugar or other sweetening matter or flavour, would increase from 10 per cent to 20 per cent.

The excise on aerated beverages will rise from 10 per cent to 20 per cent.

The changes are expected to yield some EC$2.4 million in additional revenue.

Regarding alcoholic beverages, undenatured ethyl alcohol of an alcoholic strength by volume of 80 per cent or higher, will see an increase in excise by 10.7 per cent.

The excise on brandies, whiskies, gin, Geneva gin, vodka, and rum in bottles of strength not exceeding 46 per cent volume will increase by 20 per cent.

These changes are expected to generate EC$800,000

Regarding cigarettes containing tobacco, the excise will increase from $1.55 to EC$2.75 per 100 sticks.

These measures are expected to generate $500,000 in revenue.

The 2019 budget represents a 7.4 per cent year-on-year increase that is accounted for on both the capital and recurrent sides of the fiscal package.

9 replies on “Increased taxes on fuel, liquor, cigarettes in 2019 budget”