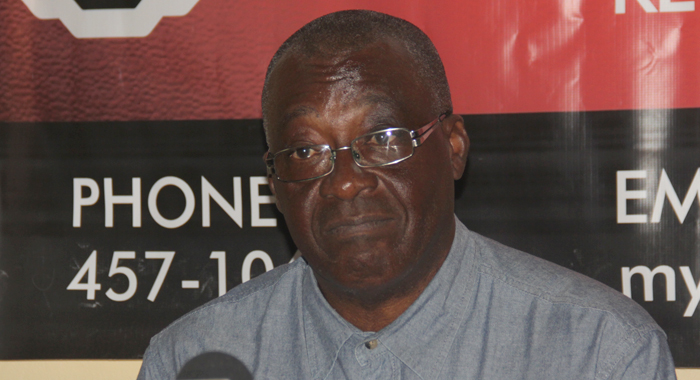 The former high school principal who was forced to resign in order to contest the 2010 general elections and was not rehired after doing so, said he felt betrayed by the Unity Labour Party (ULP) administration.

“I have heard it said that I was foolish to have taken that decision to give up my job with under two years to go to retirement.

“I trusted that agreement. I remembered quite well how much the Prime Minister had boasted about such a revolutionary step that had been taken and so I trusted it. I had no doubt in it.

“I remember the day when I was forced to resign my job. It was one of the saddest and darkest days of my life. Could you imagine a 39-year-long teaching career ending in a forced resignation?” Johnson said.

Johnson holds a master’s degree in science education curriculum management and had daughters in secondary school and community college at the time of the development.

He also had “grand children who I could not buy anything for”.

The former teacher, who said he is now “way past retirement age”, spoke of the struggles he faced after not being rehired after losing his bid for a seat in the elections and his pension and gratuity benefits.

Johnson, along with Elvis Daniel, and Addison “Bash” Thomas had relied on the collective agreement that the ULP signed with the Teachers’ Union in 2005.

The agreement guaranteed six months’ election leave for persons who have been teaching for three years or more, to allow them to contest elections, and to be reinstated if they are unsuccessful.

But when the teachers — all of whom contested the polls on NDP tickets — applied for election leave pursuant to the collective agreement, the government pointed them to the section of the constitution that bars public officers from contesting elections.

And, with nomination day approaching, the three teachers decided to resign their posts.

After the polls, they reapplied for their jobs; they were not rehired and their union sued the government.

However, last week, the appeal court overturned that ruling and held that the collective agreement did not offend the Constitution.

The court also ordered that the men be paid their gratuity and pension.

Speaking at the press conference, Johnson expressed “sincerest gratitude” to the teachers’ union and their legal team.

“In the same breath, I would like to convey the many congratulatory remarks I have been receiving from so many persons, some of whom I don’t even know. And I have been careful almost every time to respond by saying, ‘Such remarks actually belong to the leadership of the union who decided to take up this very challenging case and the team of lawyers who actually believed in it and who decided to push it.’”

Johnson, however, admitted that he was not always optimistic before last week’s appeal court verdict.

“I must admit that I actually felt very hopeless in this situation. The judge ruled that it was [hopeless], and I felt that way and that is because of the sort of atmosphere in which this whole thing evolved.

“What was said from political platforms and what people were saying on call-in programmes. It was as if I found myself in a very deep, dark tunnel.

“And the past eight years have been very difficult,” Johnson said as his voice began to crack.

“If you sense some emotion in my voice, it is because it was extremely difficult for me and my family.

“It was very tough, emotionally and mentally, to live with the realisation that everything that I had worked for in terms of benefits for some 39 years had hopelessly gone down the drain.

“There were even those crazy moments when I felt that I had let down my family — my daughters, my wife.”

Johnson said many persons are surprised when they learn that he started to teach at age 14.

He said he worked his way up to the ranks to principal — and a senior education officer for two weeks.

“That is just another story. Those two weeks were two of the happiest weeks of my professional life, and then I was kicked out of the ministry of Education,” he said.

He said that sometime in 2008, he was appointed Senior Education Science (Science), attached to Curriculum Unit of the Ministry of Education.

“After two weeks, I was simply called in to the Ministry of Education and I was told that I’d have to go back to my school,” he said.

The information from the ministry was that they had made the recommendation but the Service Commission Department had not approved it.

Johnson said he had also had a stint at the St. Vincent and the Grenadines Community College, where he managed an outreach programme to the rural districts of the country.

“I was then Head of Outreach on attachment, still holding the post of Principal of Georgetown Secondary School but operated in that position,” Johnson told the media.

“I never dreamt that my career, which I was very proud of, would end this way. That night — I still remember it, I cried for hours, and since then I’ve been carrying much mental and emotional pain. This ruling has served to relieve me of much of the burden I have been carrying…

He said it is for this reason that he will be “eternally grateful to Mr. Robinson and the leadership of the St. Vincent and the Grenadines Teachers’ Union; and to the legal team of Jomo Thomas, Shirlan “Zita” Barnwell and Ruggles Ferguson for their “belief that we were wronged and that our case had merit and was never hopeless as was ruled here in the court here in St. Vincent and the Grenadines.

“I must also express my sincerest gratitude to my family for their understanding and support; and to the many friends and relatives both at home and abroad who offered very tangible support to me and my family over those eight very difficult years.

“And I mean that. They have been difficult. Challenging. So I can smile a bit now, in that I can say we have been vindicated. It has been proven that we were not foolish. We were simply exercising our rights, which have been upheld in the appeal court in the Eastern Caribbean…

“The fact is, and I have said it, I trusted it (the collective agreement), I believe it. It was common knowledge all over the place that it was touted as a most progressive move: ‘Teachers can now run and if they lose they get their jobs back.’ And it was on the basis of that why I actually entered. I had just under two years to go toward retirement. And had there not been that, I really would have been a fool to go in. but there was that so that would have discounted any foolishness on my behalf because my decision was based on the strength of that collective agreement. I really believed I would get my job back.”

Johnson said that after not being rehired he had to “scale down on my standard of living.

“We couldn’t shop as well as we used to before, we couldn’t eat as well as we could have before. I am talking about bread and butter issues here. You can just imagine moving from an income of over $6,000 [a month] to no income.”

He said that his wife had a job and there were friends who supported, “to whom I am eternally grateful.

“And there was a period of time when I received a small allowance from the party, the NDP.”

Johnson said he was able to keep it together because the “God above; my faith in God, and, of course, there are persons that I could have leaned on.”

Thomas said that if retirement is at 55, he is “not yet at retirement age”.

Meanwhile, like Johnson, Thomas, speaking at the same press conference, was in high praise of the union and its legal team.

“I share similar experiences to Mr. Johnson. It wasn’t easy. It was really tough,” said Thomas, who went on to be hired as the research officer for the Leader of the Opposition, a government financed post.

“And, let me say upfront, had it not been for Article 16 of that collective agreement, I would not have entered politics as a candidate for South Central Leeward.

“Even though the community was calling for me to go forward, I would not have done that had it not been for Article 16 of the collective agreement. So, the end has come. I believe this is the end, we have won and it is time to celebrate and we must celebrate, and again thanks to all those who supported me during that time.”

Thomas holds a Bachelor’s degree in education administration and was teacher at the Park Hill Government School at the time of the election.