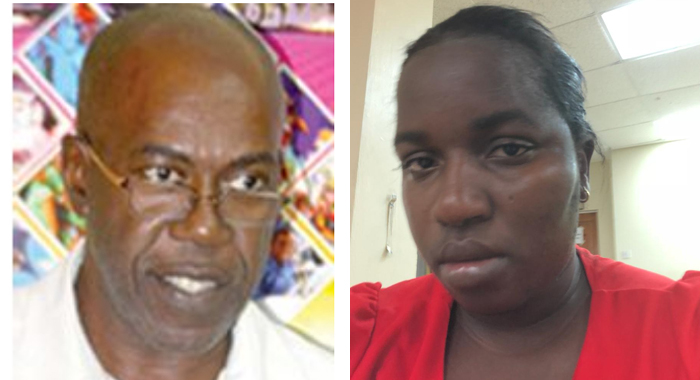 Social commentator, Marlon Stephenson, left, (internet photo) and his coworker, Eunice Dowers, with a swollen face after the incident.

The management of a company where a violent brawl took place on Wednesday between two employees say that the matter is being investigated internally.

Joshua DaSilva, a manager of Star Garage, told iWitness News on Thursday that the findings of the investigation will be forwarded to the board of directors, who would make a determination.

iWitness News happened to be at the parts department of Star Garage in Kingstown when Stephenson repeatedly struck Dowers who, in turn, stabbed him with a utility knife shortly before 1 p.m.

The incident occurred during the lunch hour, when the store is closed for business.

We telephoned the police at 12:59 p.m. and the operator said that the information would be forwarded to the Criminal Investigation Department, but there had been no police presence by the time we left the store more than 10 minutes later, although the Central Police Station is located just blocks away.

From comments by staff at the time of the incident, iWitness News was able to gather that Stephenson had “lost his cool” after the woman swore at him, telling him about his “mother c***t” – a swear word that many Vincentians consider highly offensive.

The woman later identified herself to us after contacting iWitness News via Facebook Wednesday night.

Dowers, who said she was unaware that iWitness News had witnessed the incident, told us on Thursday that she is originally from Nigeria and has been living in St. Vincent and the Grenadines for the past seven years.

Dowers is a naturalised Vincentian, having married a Vincentian man.

The Star Garage customs broker told iWitness that she has repeatedly complained that she does not want anyone sitting at her desk.

She said that as a result of an incident last week, the management of the company decided to relocate her to an upper floor of the parts department.

She said that on Wednesday, she was sitting at the desk of a co-worker who is also a friend, when Stephenson, who reportedly works in the marketing department, told her, “Dowers, I thought you said you didn’t want anybody sitting by your desk and you are by somebody else desk. You are such a hypocrite.”

“I said, ‘Boy, move your mother c***. Don’t have anything to do with me; stop interfering with me’,” Dowers told iWitness News, recounting her response to Stephenson.

She said Stephenson came over, but a lady was there so he “cooled down and went by his station, where he normally sits down”.

Dowers told iWitness News that the two ladies who were there later said they were going for lunch.

She said she was speaking on the phone with her husband when Stephenson came to where she was, picked up chair, asked her whose mother she was talking about and threatened to hit her with the piece of furniture.

The woman said that Stephenson then began to strike her repeatedly and forcefully in the face.

“So I couldn’t even do anything. I was now looking around, like touching the girl’s desk to get anything on my hand. I pulled the drawer because I know everybody put things in their drawer.”

She said she was able to grab a utility knife and “give him a stab”.

“And he pulled it and started hitting me until somebody now came up, people now came upstairs and separated him,” Dowers told iWitness News.

“So I went to the station yesterday and made a report. They brought an officer there because I didn’t go back to Star Garage as I went home. He is saying he blacked out, the only thing he could remember is that me stab him.”

She said she does not plan to go back to work and thinks she would press charges against Stephenson.

When iWitness News contacted Stephenson on Thursday, he suggested that we contact the management of the business place, saying that his would be a biased report.

“I personally, if I tell you anything, I would be giving you a biased story from my side, nah so?” the commentator, Stephenson said.

Told that we had also spoken to Dowers, Stephenson said, “Well that is ok. I anticipate all of that. That is the nature of the character I’m dealing with. I have had contact with that person for more than a year and that is game–”

Stephenson said he was not aware that iWitness News was present when the incident took place.

“I just came from the police and reported it. Because just to communicate, and I have to communicate something negative or challenge somebody on something, I ain’t expect it wudda bring violence to me. But I think it is something you should talk to the management [about] and management go tell me wha’ to do.”