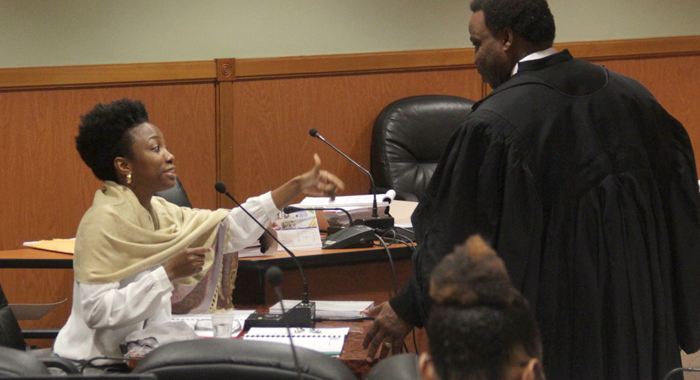 Lawyer Maia Eustace, a witness and lawyer in the NDP’s election petition case, speaks with counsel Keith Scotland,of Trinidad, a member of the NDP’s legal team during a break in Monday’s trial in Kingstown. (iWN photo)

A lawyer for the main opposition New Democratic Party (NDP) in the election petitions case has been accused of violating the secrecy of an elector’s vote, one of the same charges that the petitions have levelled.

Maia Eustace, however, said that she had not violated the secrecy of an electors vote as the photograph of a ballot she tendered in evidence was a spoilt ballot.

The development came on Monday as she was being cross examined by Senior Counsel Douglas Mendes, the lead lawyer for the government in the election matters.

Mendes had noted that a photograph of a ballot that Eustace tendered in evidence in the Central Leeward petitions clearly shows the voter’s number of an actual elector.

The photograph was taken by the NDP’s Benjamin “Ben” Exeter, who is challenging the announced victory of the Unity Labour Party’s Sir Louis Straker in Central Leeward.

The NDP’s Lauron “Sharer” Baptiste is also contesting the announced election of the ULP’s Montgomery Daniel in North Windward.

The ULP was declared winner of the polls, having won eight of the 15 parliamentary seats, according to the official results.

The ballot in question is marked in a way that suggested that the voter had voted for Sir Louis.

Eustace, who is the instructing solicitor in Exeter’s case, was a roving agent for the politician on election day, Dec. 9, 2015, and attended the final count one day later.

At times in her almost six-hour cross examination, Eustace referred to as “documents” what Mendes called “ballots”.

Her choice of the word “documents” was in light of her party’s contentions that at least some of the ballots used in the 2015 vote violated the nation’s election laws because of their design.

Mendes noted to Eustace that the ballot contained a voter’s number.

Eustace, however, said there is a number recorded on the document.

Mendes said that he had checked and the number on the ballot corresponds with one on the voter’s list.

“So, if you check the list now, you can find out the name of the person whose number that is, and therefore, did you, by publishing this–” Mendes was saying when lead counsel for the petitioners, Queen’s Counsel Stanley “Stalky” John objected.

However, after hearing arguments from both sides, in the absence of Eustace, the judge allowed the question.

In response, Eustace said that she did not violate the secrecy of an elector’s vote since the ballot in question was a spoilt ballot.

However, Mendes pointed to the relevant section of the regulation under the Representation of the People Act and noted that there was no indication from the ballot that it has been cancelled.

“All we have is that the counterfoil was not separated from the ballot,” Mendes told Eustace.

She responded, telling the court that she knows that the ballot was a spoilt ballot, because it was removed from an envelope marked “spoilt ballots”.

“Then it should have been marked cancelled,” Mendes responded.

Eustace responded, telling the court that would be an instance of the non-compliance that the petitioners are complaining about.

She said that the ballot did not indicate how the voter voted, as it was deemed to have been a spoilt ballot.

Asked why she had exhibited that ballot to the court, Eustace said she had done so to assist the court.

She said that the ballot is a complete one used in the December 2015 general elections and shows “quite adequately the inadequate non-compliant design of the ballot”.

The petitioners are arguing the design of the ballot was not in keeping with the law and in order to verify their authenticity after a vote was cast, electoral officials had to violate the secrecy of the ballot.

Showed another exhibit and asked if the first ballot — with counterfoil attached — did not indicate how the elector voted,  Eustace said it was a spoilt vote and did not so indicate.

At this point, acting High Court judge, Justice Stanley John asked Eustace if the ballot — having been marked — did not show how the elector intended to vote.

Eustace, however, said that it would be that the person who marked the ballot had intended to vote for Exeter.

The reason for the ballot being spoilt could be that the voter indicated to the presiding officer that the voter had voted in a way that they did not intend, she told the court.

Another issue of contention was Eustace’s reference to the ballots as having been “mutilated”.

Mendes read the dictionary meaning of the word and said he was puzzled as to why Eustace had referred to the ballot as “mutilated”.

Eustace said mutilated means “a perversion of sort” of the ballot, adding that the ballot is mutilated in a number of respects.

“It evidences a disfigurement,” she said, adding that she believes that disfigure is one of the words used in definition of “mutilate” that Mendes had read.

The document is a result of the movement, a dislocation of the space allocated for the official mark and initial of the presiding officer, Eustace said.

She said there were three ways in which the ballot is mutilated, beginning and emanating from the bad design: the design of the ballot,  the manner of the cutting, the removal of the official mark –– if one was ever affixed, she said, adding that there is no way to know.

The hearing continues today, Tuesday, when the NDP’s legal team will redirect Eustace.

The proceedings are taking place at the NIS Conference Room in Kingstown.