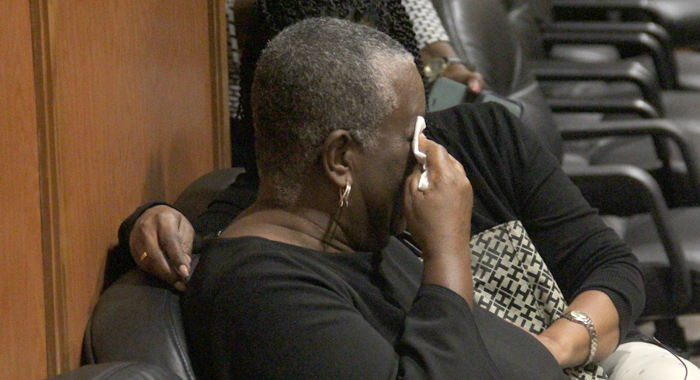 Sylvia Findlay-Scrubb, who was election chief at the time of the 2015 general election wipes her eyes after testifying on Thursday. (iWN photo)

Former supervisor of elections, Sylvia Findlay-Scrubb was teary eyed after being cross-examined for about two and a half hours on Thursday, day four of the trial.

Findlay-Scrubb used a white sheet of tissue to wipe her eyes after being hugged by her daughter, Faylene King and other persons after the proceedings.

She sat and chatted with some persons in the room as she continued to wipe her eyes before leaving the courtroom at the NIS Conference Centre in Kingstown, shortly after the proceedings were adjourned around 4 p.m.

Her cross examination in the petition that Benjamin Exeter of the main opposition New Democratic Party has brought challenging the announced victory of Sir Louis Straker of the Unity Labour Party in Central Leeward in the Dec. 9, 2015 general elections will continue today.

As was the case with all of the other witnesses so far, Findlay-Scrubb tendered her witness statement as her evidence in chief.

The cross examination is being conducted by lead counsel for the petitioners, Queen’s Counsel Stanley “Stalky” John.

Findlay-Scrubb told the court she retired as the nation’s election chief in April 2018, having come to the post at the end of her career as an “educator”, the word she opted for instead of John’s “school teacher”, adding that she worked in the formal and non-formal systems.

She told the court that in St. Vincent and the Grenadines, being the election chief is not a profession and Supervisors of Elections in SVG have been retired public servants, and generally were educators.

Being a teacher and a Supervisor of Elections are “clearly” different jobs, Findlay-Scrubb said, adding that that was not to say that she was “ignorant of what was required”.

She said that she had worked in the 1979 election, 1983 by election, and 1984 election in Central Leeward as a presiding officer, but did not work in any election after 1984 before becoming Supervisor of Elections.

The former election chief said that after being appointed Supervisor of Elections, she had to make herself familiar with the laws that govern elections in SVG and did so under the guidance of the Ministry of Legal Affairs, specifically the Attorney General’s Chambers.

She said she also spent time with a predecessor who briefed her in terms of what her role was.

“I had an understanding of what the expectations were,” she said, adding that she also had the benefit of her immediate predecessor.

Findlay-Scrubb said that at least two other past supervisors of elections, when they heard she was appointed to the post offered their services and she felt that mentorship was necessary as these were people she knew from the teaching profession as senior.

They were Selwyn Jones and the now deceased Egbert Samuel, adding that she believes that Jones was elections chief until the 2001 election.

She said she couldn’t recall the last election that Samuel supervised.

“And so, I availed myself of all of that experience which they had,” she said, adding that the Electoral Officer had attempted to educate the Vincentian public about elections.
Findlay-Scrubb said she is an avid reader and reads whatever information she was able to access before coming to the job.

Asked what her role was, as she understands it, based on the law, Findlay-Scrubb said that, on a day-to-day basis, she was required to ensure that the voters’ list was updated and maintained, that eligible voters were allowed to register, qualified persons who wanted to be transferred, had their transfers done.

Findlay-Scrubb further said she considered her role to be one where she had to supervise all the functions that would have been necessary to keep the machinery active and functioning from one election to another so that when an election was called, not only would the voters list be updated but even the stakeholders, mainly the political parties and the voters would be familiar with the voters’ list, who is on the list, are they qualified to vote, so that, at the end, as much as humanly possible, all of those things would not be done at the end, during the last 15 days before the election.

In performing those functions, she had to supervise the registering officers and the photographers who did the registration in the 15 constituencies.

Asked how she saw her role in relation to the interest of the political parties and the other stakeholders, Findlay-Scrubb said she considered her role, in the final analysis, to be to ensure free and fair elections in SVG and would have it no other way.

She said she saw her role as ensuring that every political party had a fair chance in the conduct of the elections.

She said she expected everything to be done in accordance with the rules and the law while she was the election chief.

The then moved to specific requirements under the law and her understanding and actions in relation to them.

The cross examination continues today, Friday, at 9 a.m. at the NIS Conference Room in Kingstown.

In the second petition, Lauron “Sharer” Baptiste of the NDP is asking the court to overturn the announced victory of the ULP’s Montgomery Daniel in North Windward.

The ULP was declared winner of the election and began a fourth consecutive term in office, having won eight of the 15 parliamentary districts, while the remaining seven went to the NDP.