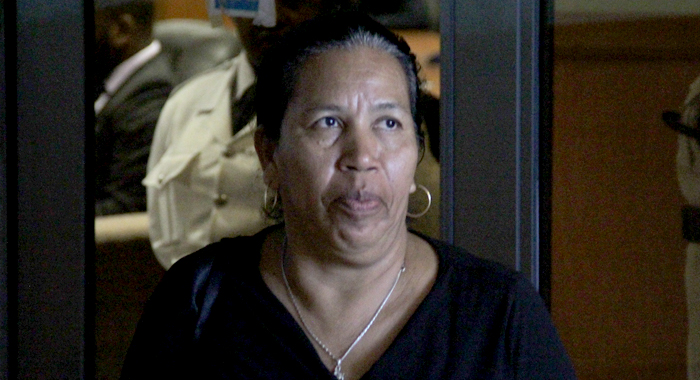 The team for Lauron “Sharer” Baptiste of the New Democratic Party (NDP), on Thursday, closed their case in the petition he had brought challenging Montgomery Daniel’s election as Member of Parliament for North Windward in the December 2015 general election.

The team closed their case after hearing the testimony of Cheryl Sutherland, one of four witnesses to testify in the case.

The court was forced to take an early lunch – at 11 a.m.– on Thursday for the execution of a summons ordering Sutherland to appear before the court.

iWitness News understands that Sutherland, a school teacher, had said that while she was willing to testify, she wanted the court to summon her because she did not want it to appear that she had left her workplace to go testify on behalf of the opposition.

The petitioner did not testify in the case.

When she arrived in court shortly after noon on Thursday, Sutherland told the court that she had sworn an affidavit on Dec. 14, 2015 and wanted to tender that as her evidence in chief.

She confirmed that the document before her was the original and the cross examination by lead lawyer for the government, Senior Counsel Douglas Mendes began.

Sutherland told the court that after she swore to the affidavit in 2015 she kept a copy.

She said that she was given a copy by Kay Bacchus-Baptiste, a lawyer for the NDP, who was appointed a senator for the party last year.

Sutherland said that she had misplaced in her house the copy of the affidavit that Bacchus-Baptiste had given her and the lawyer gave her another copy Wednesday night and that it was identical to the original.

She told the court that on Dec. 10, 2015, the day after the election, Grady King came to her house and asked her to witness the recount.

Sutherland said she got to the police station sometime between 8:30 to 9 a.m. and stayed there until around 1:30 to 2 p.m. the same day.

The witness said she had never acted as a polling agent in an election nor had she acted in any capacity in an election but had voted in the 2015 election.

She said she knows the counterfoil to be the narrow strip of paper with the ballot number on it that should be torn off the ballot paper and that she saw documents like that on Dec. 10 during the recount.

She said that during the count, King, along with the returning officer, Vil Davis, one Kendal Osment, and “Chevy” Hoyte were also at the polling station.

Sutherland told the court that when she got to the polling station, Davis brought the boxes one at a time and put them on the table.

She said they had what she thinks was orange tags and Davis used a scissor to cut the strap, took out the big envelope and the small ones and emptied the envelope, looked at them and put them back.

She said that Davis removed from the envelopes the documents that were inside, including the ballots, counterfoils, and forms that had to be filled out.

Davis then packed the ballots back into the envelopes and went over the other side and was making notes and that was it, Sutherland said, adding that they sealed the boxes and the process took about 10 minutes for each box.

She said he did this for each of the boxes.

“One ballot box was not sealed,” Sutherland told the court, adding that after Davis was finished, he packed the boxes in alphabetical order.

Sutherland maintained that no individual counting of the ballots actually took place.

However, Mendes called her attention to a section of her witness statement, where she said that he ballots were counted.

She, however, maintained that the ballots were not counted individually but Davis checked the spoilt ballots.

Mendes put it to the witness that the ballots were not counted individually, but she said she disagreed.

Asked if she knows what a “Form 6” was, Sutherland said no.

Asked if she had ever heard of it before, she said only in relation to school.

Mendes then noted that in her witness statement, Sutherland had said that she saw no form 6 as prescribed in the RPA advertising the date and time of the final count.

“Why did you swear to that? Where did the statement come from, sir?” the lawyer asked Sutherland, who said she was not sure.

She told the court that she did not write her statement in her own hand, but had dictated it to the lawyer and she did the recording.

She told the court that she could not recall whether in her conversation with the lawyer she had used the term “Form 6”.

She told the court that she did not see the official mark on the ballot.

Sutherland had further said in her affidavit that she did not see the official mark on the ballot.

She told the court that she understood this to be Davis’ signature but could not be sure, as she was inexperienced in election matters.

The trial began on Wednesday with the cross examination of  Deryck Smart, a farmer, of Caratal, Georgetown.

Smart’s complaint was that his ballot was not accepted.

His complaint, according to Mendes, was also that the presiding officer, Ms John behaved “bad, bad, bad” and had a quarrel with his attorney, Kay Bacchus-Baptiste, and when the lawyer was there, John was behaving “bad, bad, bad”.

Mendes said that John’s response was that Bacchus-Baptiste was the one behaving “bad, bad, bad”.

Smart said that is not true and only John was misbehaving.

Mendes further pointed out that John had said that she saw a flash and had told Smart to delete the photo, but he said he had not taken any photo.

Smart said that John did not say that she thought he had taken a photo but that she had seen him take a photo.

“I’m am putting it to you that you took a photo,” Mendes told Smart, who maintained that was not the case.

Mendes put it to Smart that he had taken a photo of his ballot, but the witness denied this was the case.

Another witness in the case was Kendal Sandy, of Caratal, who was an inside agent for the NDP at the polling station at NWI.

He told the court that when the ballot was returned, the presiding officer held it in such a way that he could see, through the side of the ballot, how the elector had voted.

He, however, said that the presiding officer did not unfold the ballot. But he personally saw, through the space at the side of the ballot, how 60 persons.

Sandy said in his witness statement that the voting

community is small and persons’ political preferences are well known.

He said that the presiding officer would peek at the ballots of persons whose voting preferences are not well known.

On Thursday, the trial also saw the cross examination of Leon Adams who said that he had made notes on his voter’s list.

However, at the trial he said that while the list was his, he did not see the notes that he had made on it.

He said that when the presiding officer, Veronica John, held the ballot to tear off the counterfoil, she held it in such a say that he could see through the side of the ballot who the elector voted for.

He said that the presiding officer did not unfold the ballot.

Adams said he would refer to what happened as “a disagreement, not a quarrel”.

In his witness statement, Adams had said that John did not count the counterfoils after the polling station close.

The court, on Thursday, began hearing testimony from the respondent’s witnesses in the petition that the NDP’s Benjamin “Ben” Exeter has filed challenging the results of the vote in Central Leeward.

When this is complete, the court will begin hearing the respondent’s witnesses in the North Windward petition.