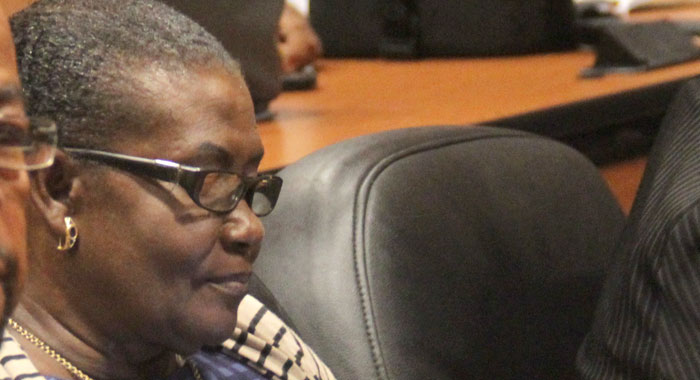 Veronica John, a presiding officer in North Windward in the Dec. 9, 2015 general election, admitted telling voters “Show me your voting finger”, but said she did not know those were the words of a popular campaign song for the ruling Unity Labour Party.

Leon Adams, the opposition New Democratic Party’s (NDP) agent at polling station NWI, where John presided, accused her of using the words of the ULP campaign song when persons came to vote.

“Yes I did. I asked them to show me their finger so that I can look at it to make sure it is clean and it doesn’t have any ink or anything like,” John said on Tuesday as she was under cross examination by lawyer Keith Scotland during the trial in the North Windward election petition.

Last week Thursday, Feb. 14, as he was being cross examined by Senior Counsel Douglas Mendes, lead lawyer for the government in the case, Adams told the court that John made the statement six or seven times.

“She was singing it; not saying it,” he told the court.

“She was singing?” Mendes said and went on to note to Adams that he said in his witness states that John “would say at time, ‘Show me your voting finger’”.

“And now, you are saying she was singing it,” Mendes said.

There was a back and forth between the lawyer and Adams over whether John was allegedly “saying” or “singing” the slogan.

“There is a big difference between singing and saying. Don’t you think so? ” Mendes said.

He, however, told the court that when one says something, he or she is not necessarily singing it.

On Tuesday, John told the court she was not sure how many persons she made the comment to.

She, however, said she did not use the expression throughout election day.

She told the court she began doing so after Organisation of America States election observers visited the polling station and asked her how she knew voters’ right index fingers were clean before dipping into the election ink after casting their ballots.

John said she told the observers that she was looking at the voters as they approached her.

“And after that, I realised that I was not examining their fingers closely enough, as they come closer to me, I asked them to show me their finger so that I can make sure that their finger is pristine and that they have not voted already,” John told the court.

Asked if she did it until the close of the poll, she said that some persons knew which finger, but she realised that younger voters were “new to this”, so I asked.

Asked if she did it until the end of the poll, she said, “Not to everybody.”

She said she could not recall what time the OAS visited or left the polling station.

Asked if she knew that “show me your voting finger” was “one of the main campaign songs of the ULP”, John said:

“I know it’s a song, I don’t know if it’s a main campaign song or what. And I don’t listen to songs,” she said.

Scotland suggested to John that she was purposefully untruthful and evasive.

She said that was not the case.

“I might have heard the song on the road but I don’t listen to it,” she said.

Asked by Justice Stanley John if she was being untruthful in her answers during the trial, John said:

“I am very truthful for each question that you have posed to me.”