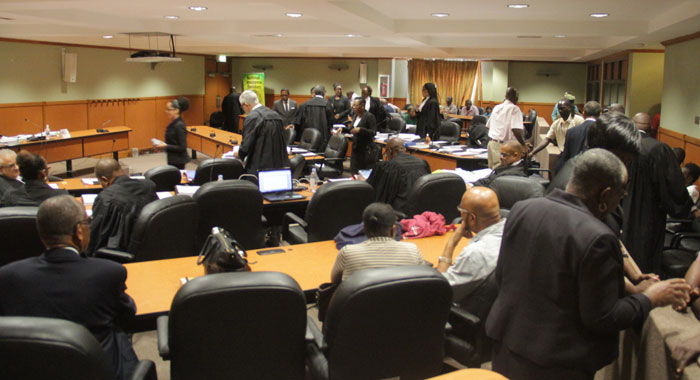 The hearing of the petitions is taking place at the NIS Conference Room in Kingstown. (iWN photo)

The main opposition New Democratic Party says it has issued to all of its spokespeople a directive “regarding the propriety of refraining from commenting on the merits of the trial and the judicial officials, pending delivery of the judgment”.

The party made the disclosure in a press statement on Thursday.

“… having truthfully presented their cases, the petitioners await the decision of the judge. They have bravely and resolutely done their part for their constituents and for the nation,” the party said.

It said that it had issued the directive to its spokespersons apart from certain aspects of the evidence that it had highlighted in the press statement.

In the press statement, the party said the testimonies of witnesses for both the petitioners and respondents had vindicated its outcry after the Dec. 9, 2015 poll.

“In witness statements and cross-examination testimony, compelling evidence was given by the witnesses for the petitioners concerning numerous serious irregularities and illegal practices that took place in the 2015 general elections”.

The hearing of oral evidence wrapped up on Tuesday, after seven days.

The party said that witnesses for the respondents, when cross-examined by the petitioners’ lawyers, Queen’s Counsel Stanley “Stalky” John and Keith Scotland, also gave evidence “that supported the petitioners’ claim that the presiding officer’s official mark and initials that were required by law to be on each ballot counted were wrongly placed on the counterfoils and were entirely missing from ballots.

“Moreover, notwithstanding this fatal flaw, those ballots were counted as though they were legal ballots.”

The party said that the evidence given at the trial confirmed that in at least one polling station in Central Leeward, all of the ballots did not have the official mark and initials of the presiding officer on them and were, therefore, illegal.

“Yet, they were counted as though they were legal ballots,” the party said.

Acting High Court judge, Stanley John will hand down his ruling on March 21, after hearing oral submissions on March 6, at the NIS Conference Room in Kingstown, a specially constituted court.

Electoral officials say that the ULP won eight of the 15 parliamentary seats for a fourth consecutive term in office, while the remaining seven went to the NDP.

5 replies on “PETITIONS TRIAL: NDP bars spokespeople from commenting on merits of case”