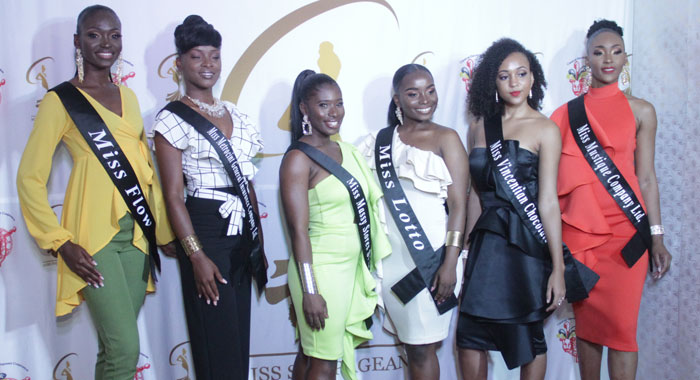 A detective, a quality assurance technician and a customer service representative are among the six young ladies vying to be crowned Miss SVG 2019.

The contestants were introduced to the media at the media launch of Vincy Mas 2019 in Kingstown on Saturday, during which they were sashed by their sponsors.

The delegates told reporters that entering the pageant has been a long time plan of theirs, with most saying that the first prize of a university scholarship, worth some EC$80,000, was the major driving force.

Delecia is a nursing student who hopes to further her studies in nursing anaesthesia.

She said that if she wins the pageant, it would be a good opportunity for her to pursue that dream.

Delecia was motivated by the scholarship and “a chance to be a role model to inspire those coming up and also to be an ambassador” for St. Vincent and the Grenadines.

Greaves told reporters she entered the pageant because she sees it as an opportunity “to share my views and thoughts and opinions about how I would further develop St. Vincent and the Grenadines”.

At the show, patrons can expect from her “loveliness, talent, everything that the country wants to see”.

Greaves is a finance assistant at Digicel SVG and said that she plans to study business management.

After one year as a police officer, Silvern Lavia is yet to make an arrest.

The Miss SVG crown could be her first.

“First of all, Miss SVG gives you an opportunity or a platform to empower ladies and to showcase your talent and to build your self esteem,” said Lavia, a detective attached to the Criminal Investigations Department in Kingstown.

“Most importantly, if I am to be crowned Miss SVG, we all know the grand prize and I intend to pursue studies in criminal justice, so it is actually a great opportunity for me.”

Patrons at the show can expect  “beauty, talent; it is going to be fun,” she told reporters.

“It is going to be epic. All the young ladies, we are prepared and we are ready to showcase our talent,” Lavia further told reporters.

Meanwhile, Modeste told reporters that she had been interested in the Miss SVG pageant since she was a child.

And as she got older, her interest in entering the pageant has grown.

“I would like to bring the highlights and importance of language and literacy to the Vincentian population and I think by entering the Miss SVG pageant that I would hit a later demographic in doing this,” said Modeste, a student at the teacher education department of the Community College.

If she wins, she would use the scholarship to pursue a bachelor’s degree in education.

Modeste said that while growing up, she watched the Miss SVG show on TV and has gone to the shows.

“And seeing the girls on the night of the show doing their absolute best and looking amazing, it has been interesting to me to be a part of that myself. So that’s why I wanted to enter the Miss SVG Pageant.”

With Modeste as a Miss SVG contestant, patrons “can expect, excitement, exuberance — a lot.

“Come to the show to find out more,” she said.

“The scholarship! Of course!” that was a major inspiration for Rodney, who emphasises her Garifuna heritage.

She told reporters: “As cliché as it sounds, I have always wanted to enter the Miss SVG pageant. For me, it’s not just about being beautiful or being in the spotlight. I believe it can offer a lot more for me and it can develop me holistically.”

And to patrons, Rodney says:

“Expect the unexpected but nothing but the best.”

And, Thomas, already has a first degree, so the scholarship is not the main inspiration for her.

In fact, entering the Miss SVG pageant is on her bucket list says the quality assurance technician at Eastern Caribbean Bottlers Inc.

“Pageantry has always been a love of mine and I always wanted to be an ambassador for my country and also,” Thomas told reporters,

Miss SVG is not her first pageant.

She competed in the Miss Heritage pageant while she was still a student at the Girls’ High School.

That was “a good while a back before they went national”

Thomas did not place in that pageant, but she is hoping to change that with the Miss SVG show.

“I love empowering women, I like women who take charge and show how they are to actually be a positive role model for other young ladies,” she told reporters.

At the show, she is promising “quality”, noting her current occupation.

Besides being able to tick off another item on her bucket list, the scholarship is one of the other main reasons.

Thomas holds a degree in biochemistry so she decided to enter Miss SVG  “because, as I said, pageantry is a love of mine and it is something on my bucket list and life is short. So, why not?”

Thomas says that she loves science and would love to pursue a master’s degree in chemical and materials engineering.

One reply on “Biochemist, detective among Ms SVG contestants”