PETITIONS TRIAL: NDP witness accused of being ‘a signatory to what she did not author’ 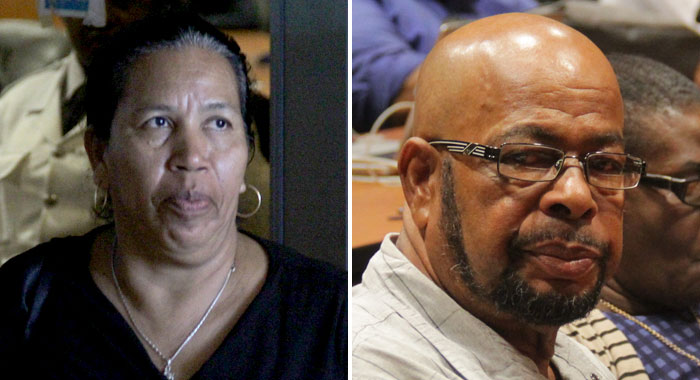 The witness who was summoned to testify in the North Windward election petition has been accused of being “a signatory to what she did not author”.

Ville Davis, the returning officer for North Windward in the Dec. 9, 2015 general election levelled the accusation against Cheryl Sutherland as he was being cross examined on Tuesday, the last day of oral evidence in the case.

Sutherland, a teacher, was co-opted — in accordance with the electoral law — as a random person to witness the final count in North Windward on Dec. 10, 2015.

She later signed an affidavit saying that there was no counting of the individual ballots on Dec. 10, 2015 and that the process she witnessed ended around 2:30 p.m., six hours earlier than Davis claimed in court.

Lauron “Sharer” Baptiste of the main opposition New Democratic Party is challenging the outcome of the vote, which electoral officials say he lost to the ruling Unity Labour Party’s Montgomery Daniel.

During the cross examination by Keith Scotland, Baptiste’s lead counsel, Davis told the court that he knows Sutherland to be a school teacher and that he did not know which political party she was supporting.

Asked if, to his mind, Sutherland was an independent person, he said that she was not a representative of any party.

“She came in as an observer and that was what she was until she left,” he said.

He told the court that, at no time, did he ask Sutherland if she had any experience in election matters or the final counting of votes after an election.

Davis also said he did not tell Sutherland what she had to do during the proceedings.

He told the court that Sutherland had arrived at the polling station late.

“… those who came at beginning they were briefed. When she walked in, we were doing what we had to do,” he told the court of the woman who Gradie King, an electoral officer in North Windward, had asked to witness the final count.

“That slipped from my mind when we had the lull,” Davis said of why he did not explain the procedure to Sutherland.

He said Sutherland spoke the truth when she told the court that each of the ballot boxes had four plastic ties on the side that were cut with scissors to open then.

He, however, disagreed with her when she said that the ballots were not each counted individually, but rather, after going through each box, Davis just packed envelopes back into the ballot box and that was it.

Scotland asked Davis if Sutherland was “fibbing” on him in making such a claim.

“I believe she was a signatory to what she did not author,” Davis told the court.

He said he believed this because there are “untruths” in her witness statement.

In her witness statement, Sutherland said she did not see any Form 6 at the final count. A Form 6 is a notice announcing the date and place of a final count after an election.

Asked if she knows what a “Form 6” was, Sutherland said no and told the court the only Form 6 she knows about is in school.

“Why did you swear to that? Where did the statement come from, sir?” asked Senior Counsel Douglas Mendes who was cross examining her.

She told the court that she did not write her statement in her own hand, but had dictated it to the lawyer and she did the recording.

Sutherland testified only after  lawyers for the petitioners asked that she be summoned to court.

iWitness News understands that Sutherland, a school teacher, had said that while she was willing to testify, she wanted the court to summon her because she did not want it to appear that she had left her workplace to go testify on behalf of the opposition.

Justice John says he will give his ruling on March 21.

One reply on “PETITIONS TRIAL: NDP witness accused of being ‘a signatory to what she did not author’”