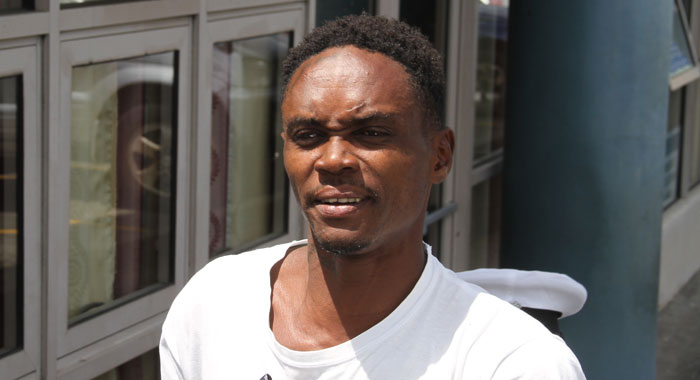 Chief Magistrate Rechanne Browne, on Tuesday, took a hard line with a drug accused with a history of other crimes who impugned the character of a narcotics officer.

In mitigation at the Serious Offences Court, Winfield “Winterfresh” Sam said that Corporal 615 Williams, who was among a team of officers that intercepted him with the drug, is his “friend”.

He said the officer had “wilfully” instructed her juniors to pursue him even after he had signalled to her that he had marijuana in his possession.

Sam, whose crimes have included burglary, possession of stolen goods, and drug possession made the comments as he mitigated on his behalf after pleading guilty to possession of 1,135 grammes of cannabis in Kingstown on Feb. 8, 2019.

He had run away from the police officer after they stopped him and had tossed away a bag that he had been carrying. Police retrieved the bag and found the marijuana inside, but never caught Sam until Monday.

The accused man told the court that when the police, who were on mobile patrol, stopped him, he gave the corporal a sign to let her know that he had marijuana on him.

“She wilfully do it.  She know that me is ah underprivileged, ne ain’t geh nothing,” said Sam.

The comments by the man, who is known for his theatrics in court, triggered some laughter.

In sentencing Sam, Browne let him know that she did not approve of the suggestions he had made about the officer’s character.

“The officer knows you because your history. Not because of friends. Yes, officers may have a gentle disposition on occasions. They talk to people like they are human beings and do their work professionally. But she is doing her work. You are not to give her no wink, as you are suggesting and ‘I have something on me.’”

Sam, who was recently released from prison on a drug possession charge, said that the corporal was leading the mobile patrol in Kingstown when their police vehicle stopped and tried to apprehend him.

He was able to escape the police by running through an alley after tossing a bag containing the drug into the pan of a vehicle.

He was arrested in Kingstown on Monday and pleaded guilty to the charge.

The magistrate told the man that the police officer has a job to do.

“You are bringing her character into disrepute. You cannot even think of that. If when you are arrested and she is kind and does her work professionally towards you, as others may not — from the suggestion I infer that — that is not to bring her and disrepute her — ‘Me ha ah police friend’ and make it to suggest that she does things improper,” the magistrate told Sam, who repeatedly apologised.

“We can’t have that. We cannot condone that suggestion… That is out of order. Don’t be suggesting that of her character at all. I don’t like that,” Browne further said.

She told him that any officer that he thinks is his friend has a job to do and if they know him, his reputation precedes him and he has to do differently for the officers to think differently of him.

“Because you are always going to be of concern to them when they see you…. They are doing their work. So you make sure you do your part and you do it straight. Otherwise, they will do their work every time they see you,” Browne said.