Nigerian woman had thumb drive in vagina in jail 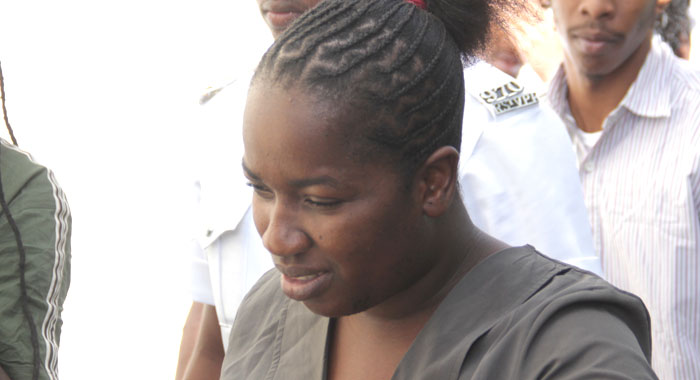 Eunice Dowers has been denied bail and returns to court on May 23. (iWN photo)

The Nigerian woman facing theft and unlawful use of credit card charges had a thumb drive in her vagina in prison.

In objecting to bail for the woman, Eunice Dowers, Senior Prosecutor Adolphus Delplesche hinted at the body cavity in which the woman hid the data-storage device.

His comments came as he rebutted a claim by Jemalie John, the woman’s lawyer at the Serious Offences Court, in Kingstown, on Wednesday, that she had co-operated with police.

“It is not true that the accused has been cooperative,” Delplesche told the court.

He told Chief Magistrate Rechanne Browne that he would give her the details in private.

A source close to the investigation later told iWitness News that a thumb drive fell from Dowers’s vagina when she was taken to prison after being denied bail initially.

She reportedly told authorities that she had hid the device there for two weeks.

Dowers, née Armachi, 25, was nabbed at the Argyle International Airport on Feb. 17, as she was preparing to leave St. Vincent and the Grenadines.

iWitness News understands that she had purchased two different tickets to leave the country.

She was arraigned on Feb. 20, on charges that between Sept. 4 and 8, 2018 at Kingstown, with intent to defraud the First Caribbean International Bank, she was obtaining service by representing, without the consent of Bertille DaSilva, 90, of Indian Bay, that she was a holder of a credit card issued to him.

DaSIlva is manager of Star Garage, where Dowers worked until recently.

On Wednesday, the chief magistrate denied Dowers Bail, saying she considered the accused woman a flight risk and ordered her to return to court on May 23, 2019.

Dowers is married to a Vincentian and has been living in SVG for eight years, according to her lawyer., but he provided no evidence to support his residency claim.

Dowers made headlines on Feb. 8 after a Feb. 6 violent lunchtime brawl with her co-worker, Marlon Stephenson at her then workplace, Star Garage.