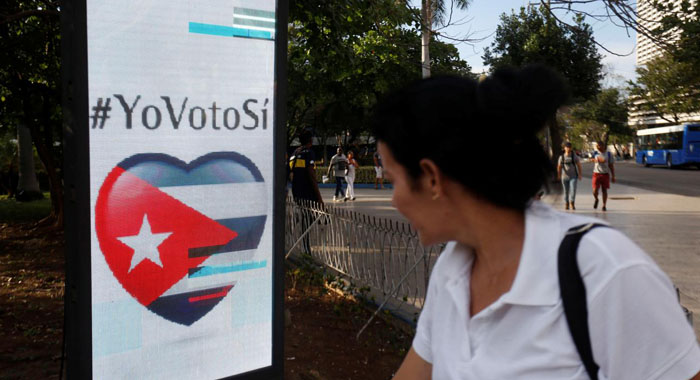 A woman passes by a screen displaying images promoting the vote for “yes” for the constitutional referendum, in Havana, Cuba, Feb. 5, 2019. (REUTERS/Stringer)

The St Vincent and the Grenadines/Cuba Friendship Society (SVGCFS) said Wednesday that it “loudly applauds the expression of the democratic will of the people of the Republic of Cuba, in approving a new Constitution for their country in a referendum on Sunday, February 24”.

Renwick Rose of SVGCFS said that while Cuba is “roundly condemned and branded by the international media and the enemies of the Cuban people and government as ‘undemocratic’”, 7,522,569 votes were cast representing a turnout of 84 per cent.

“This stands in stark contrast to the turnout in the so-called ‘western democracies’, and even our own Caribbean countries,” Rose said.

He noted that the new Cuban constitution was ratified by 6.8 million voters representing 86 per cent of the votes cast.

Of those, 706,400 voters exercised their democratic right to vote against the new constitution, 198,000 votes were blank and another 127,100 were null and void, Rose said.

“A feature of this democratic exercise is that the draft constitution on which the people voted was discussed in over 130,000 meetings at various levels in Cuba with some 780,000 suggestions made and 9600 amendments proposed over an exhaustive three-month period.

“The Constitution was then approved by the National Assembly last December before being put to the Cuban people for their approval. It is also worth noting that Cubans overseas in some 130 countries who were registered were permitted to participate in the process and to vote,” he said.

He said that one remarkable feature of the vote it is that, “unlike most countries in the world where elections are contentious processes requiring heavy security, primary school students, some 200,000 of them, guarded the ballot boxes, a phenomenon unthinkable in our ‘democratic’ societies”.

“The new Constitution makes fundamental changes in governance in Cuba,  by expanding individual rights and freedoms, recognizing different forms of property, including private, state and cooperative, promotes foreign investment and makes changes in the state structure, separating  the functions of President and Prime Minister (a new post),” Rose said.

“The SVGCFS congratulates the people of Cuba on this exemplary process. At the same time we note that Cuba not only continues to face a criminal economic embargo, in contravention of international law, but that, worryingly, some reactionary elements in the US administration are planning to impose even more sanctions on our sister country.

We call once again for the lifting of the embargo and sanctions which continue to hurt the people of Cuba, and to reiterate our full solidarity with the Cuban people and government,” the statement said.