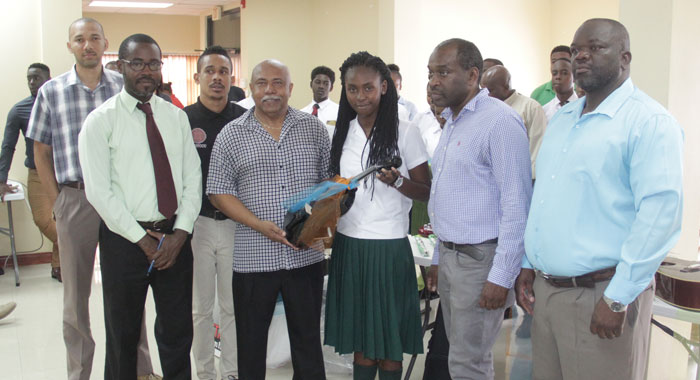 It’s time for the National Schools’ Band Showcase 2019, and, according to the organisers, it promises to be even bigger and better.

This year’s Showcase takes place on March 23 at the E.T. Joshua Airport tarmac from 6 to 9 p.m.

The National Schools’ Band Showcase is a partnership among the Ministries of Tourism, Sports and Culture, and Education and the St. Vincent and the Grenadines Teachers Cooperative Credit Union (SVGTCCU). Over eighteen 18 will participate in the event.

The showcase was launched on Monday at the SVGTCCU conference room.

Chair of the media launch, Orande “Bomani” Charles described the 2nd year of the Schools’ Band Showcase as exciting.

Charles told the audience that several experienced musicians and artistes are in support of the showcase.  He said they have shown further interest by offering their expertise through a mentorship programme for participating schools, for this, he thanked all those who have come on board.

Coordinator of the showcase, Rodney Small stated that over 200 young and upcoming musicians will perform at this year’s band showcase.

He urged the audience to take the numbers seriously because they “indicate there is a great demand for the creative arts within our schools”, noting that the theme is ““Bringing a Modern Approach to Music Education”

Small said that on March 9 at 9 a.m. all school bands will be taken on a very intense workshop journey highlighting the practical elements of stage craft, stage performance and preparing for a performance.

This year the managing committee decided to include a mini fair from 2 p.m., with lots of different attractions and rides.

Small said that just like last year, there will be a transportation system in place to make sure the young performers return home safely in a timely manner.

He said the showcase aims to promote and develop o local school bands and get them ready for the business world of music to do performances in hotels, national functions, parties and private events.

The target audience includes local families, students, teachers, adults, teens, children, and anyone who enjoys getting out and having fun, said Small, and accomplished pannist.

Vice President of the SVGTCCU, Curtis King said the National Schools’ Band Showcase is an initiative that the SVGTCCU has strongly supported since its inception.

“We promised commitment to this activity and I am happy to report that we are going to continue our sponsorship for the next three years”.

Fourth form student of the Bethel High School, Jabez Matthews described the 2018 showcase as an “amazing” experience.  Matthews said the “energy that night was unbelievable.”  He is hoping that this year will be better than 2018.

Minister of Tourism, Sports and Culture, Cecil “Ces” Mc Kie, said he is pleased with the progress of the National Schools’ Band Showcase.

He recalled the great enthusiasm from the music teachers and from students at last year’s event.  He urged students to twin their academic abilities with their musical abilities because the future is theirs to create.

The launch of the National Schools’ Band Showcase also saw the handing over of musical instruments to music teachers and students compliments persons in the diaspora.

One reply on “High expectations for 2019 National Schools’ Band Showcase”