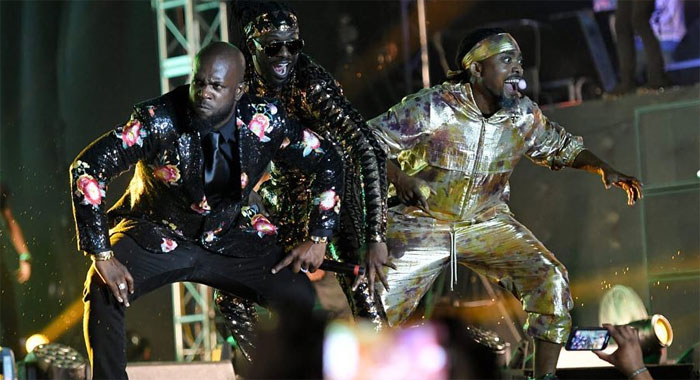 Vincentian soca sensation Skinny Fabulous has noted the significance of the road March victory in Trinidad and Tobago of a song that he wrote and performed alongside two artistes from that CARICOM nation.

“Famalay”, a song in which Skinny — whose real name is Gamal Doyle — collaborated with Trinidadians Machel Montano and Ian “Bunji Garlin” Alvarez, out clipped the competition by 140 points.

Famalay trampled Kees Dieffenthaller’s “Savannah Grass” into second place, having been played 346 times to 207, according to results released by the Trinidad and Tobago Unified Calypsonians’ Organisation on Wednesday.

It was clear shortly after its December 2018 release that the song was destined for greatness.

And by mid-January, Famalay, had made it to number 1 on iTunes’ Reggae chart.

The song is historic on many levels, as Skinny is widely believed to be the first non-national to win a road march title in the twin-island republic, famed for the Caribbean’s biggest carnival.

While Slinger Francisco — “Mighty Sparrow” — was born in Grenada, he is believed to have attained Trinidad and Tobago citizenship before winning the road march there.

But whether he is the first or second non-national to win the road march title in Trinidad, Skinny sees history in his achievement.

And he told ZONEplus Media it is always a good feeling to be a part of history.

“We understood the historical value of it when it was announced that the song will become eligible. The issue with Sparrow, I’m not sure what the details are but I think he was originally form Grenada, I am not sure he became a citizen of Trinidad and I think that might have been the case. I maintain my Vincentian citizenship and I will always be a Vincentian. And, in terms of the conceptualisation of the song, I think that, too, will have a lot of energy coming from a Vincentian root, so to speak.”

In addition to being written by Skinny, Famalay was mastered by Vincentian Parry Jack and the lyric video was done by Junior Lee — also a Vincentian.

Skinny said that the triumph of the song is historic in several ways, including in the sense that it’s a collaboration.

“The General” singer, who has several soca monarch titles at home in St. Vincent and the Grenadines, said he is happy that 20 years on, people will speak of the young man from St. Vincent who won the road march title in Trinidad and Tobago.

“And it is always happy to be part of that; something so significant.”

Skinny said that while winning the soca monarch title in Trinidad feels “amazing”, he is also “humbled” by the response that the song received from the get go.

“I think we all knew we were on to something special. What we did not anticipate

how quickly it would have grown and how far the reach would have been because it’s almost as if we drop the song today and in two days it was not just a Trinidad hit, it was a Caribbean hit and the same intensity in the response was throughout. So that was amazing for us to sit back and observe.”

He said that for the road march, they got a sense that it was a close race.

“But, at the end of the day, we also felt the pulse of the people and I think the message of the song resonated quite well with the masses.”

He said that when he went into the studio to write something dealing with family, road march was the furthest thing from his mind.

“Because it is a typical formula for road march which speaks about getting ready, crossing the stage, and this had none of that. The song, legitimately, is about pumping with your team and identifying persons that are around you that have your best interest at heart, those people are your family and that was the message.

“It was really not about stage. But it so happens that crossing the stage means so much more when you cross with people you love.”

He said he thinks that is the message that resonates with people.

The song was not part of a strategy to win the road march so he is not considering who he would collaborate with next year to try to secure another win, Skinny said.

“It was the right time for it; it was already a part of a conversation that was topical, with Mr. Killa, with just the influence of the islands right now. It was time for us to realise that soca music in itself has broadened in terms of its territorial reach…”

Mr. Killa, a Grenadian, won the Soca Monarch title in Trinidad this year.

Skinny said that it should equally be recognised that there are Trinidadian writers who have written road march and soca monarch titles for persons in other Caribbean countries.

“So we also come to Trinidad to get the production value and to get the writing skills and we draw inspiration from Trinidad as well. I think we are one big Caribbean territory. We just borrow and lend from each other all the time.”

The artiste said that he took the approach that whether or not Famalay placed second or first, the mission of the song was accomplished.

“What we realised from day two of dropping the song was that the song was bigger than any one person that actually sang on the song.”

He said the song grew bigger than the three individuals artistes put together.

“The song meant something to people. It was like a rallying call for persons who wanted to do something together.”

Skinny said that the trio accepted that whatever the outcome they would rejoice over the impact in Trinidad carnival and carnival across the world.

He said the song was written in December and there was no road march in mind.

After writing the chorus and the first verse, Skinny said, he realised that the message itself would not have been as impactful if it had come through “a singular vessel which is me. I didn’t want it to be a message being told by one person.

“And so, I felt that in order to make this song really mean something, we really need to set an example by collaborating.”

He said that he and Machel work well all the time and he felt it would have meant something even bigger if a third artiste was involved and that’s where Bunji’s inclusion came in.

He said that Machel and Bunji had had their moment of unity with “Buss Head” but he and Garlin had never done a collaboration of that sort.

“And this song represented what could happen when artistes unite. And that’s why we decided to collaborate.”