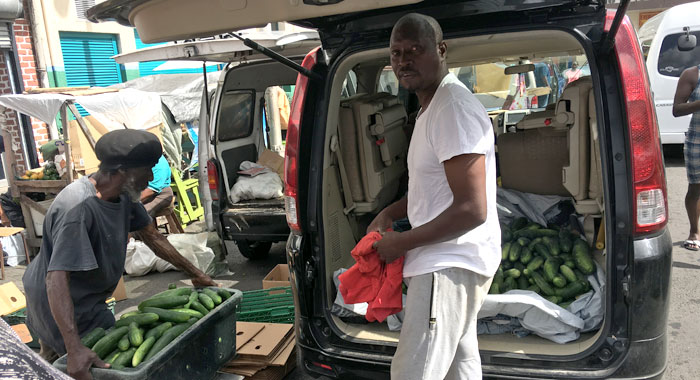 A man sells cucumbers in Kingstown on March 15, 2019. The CDB said that in 2019, economic activity in SVG is expected to benefit from initiatives to improve competitiveness in agriculture and, among other things, tourism. (iWN photo)

BRIDGETOWN (CMC) — The Barbados-based Caribbean Development Bank (CDB) is projecting that St. Vincent and the Grenadines (SVG) will attain two per cent economic growth in 2019.

The CDB said that economic activity in the country is expected to benefit from initiatives to improve competitiveness in agriculture and tourism, new construction work in hotel development, the reopening of a luxury hotel closed in 2016, and the implementation of some large capital projects including the construction of the geothermal energy plant and a new port facility in Kingstown.

The CDB, which has released the 2018 economic review of SVG, ahead of its annual board of governors meeting in Trinidad and Tobago in June, said that the country is reducing vulnerabilities through deliberate policy action.

In 2017, the Ralph Gonsalves government set up a Fiscal Contingency Fund to help offset the potential cost of damage in the future from natural disasters and the CDB said that coupled with its ongoing climate adaptation investment programme, these actions will help to moderate risks.

It said as the government “scales up investment spending to improve competitiveness and boost sustainable growth over the medium term, the fiscal framework will need to be strengthened further.

“In addition to increasing the efficiency of public spending, possible measures should include the imposition of a limit on the growth in the wages and the pension bill, and better targeting of social safety nets. Such measures will be key to restraining expenditure growth, generating fiscal surpluses, and keeping the debt ratio on a downward path.”

Economic growth in SVG increased in 2018, driven by increased tourist arrivals, and a surge in regional demand for manufactured building materials in the aftermath of the devastating 2017 Atlantic hurricane season. The fishing sector also contributed to growth, registering an increase in fish landings. Growth was accompanied by steady inflation.

The CDB, the region’s premier financial institution, says it estimates that growth in real gross domestic product (GDP) picked up from 0.7 per cent in 2017, to 2.8 per cent as tourism and investor interest rebounded.

“Total visitor arrivals increased, reflecting significant growth in cruise passengers1 and port calls, coupled with a recovery in stayover visitors from 2017’s decline. This rebound was helped by improved connectivity and easier access from external markets as a result of extra airlift. The international airport, which opened in 2017, has significantly enhanced air transport capacity, permitting for the first time direct flights between St. Vincent and the Grenadines and key external source markets ‒ Canada, New York and Miami,” the CDB reported.

It said that the yachting sub˗category, a small but growing segment, also expanded, boosted in part by new berthing infrastructure in the Grenadine Islands, the main ports of entry for yachts.

There were positive spillovers from the growth in tourism to other sectors. Transportation and retailing activities were the key areas to benefit from the upsurge in visitors.

The CDB said improved air connectivity helped facilitate greater use of ocean resources. Coupled with the privatisation of the fisheries complexes and improved fisheries management, including the setup of a new seafood packaging facility, these spurred strong growth in the landing, processing and export of fish products.

The bank said crop production declined, hampered by lower rainfall as well as ongoing trading difficulties in a key regional export market. During the year, local farmers and small traders continued to face foreign exchange difficulties with their crops sold into the Trinidad and Tobago market.

At year-end, a special clearing facility was put in place by the Eastern Caribbean Central Bank (ECCB) to facilitate currency exchanges for farmers.

The fiscal deficit widened, from 0.5 per cent to 1.1 per cent of GDP in 2017 and the CDB said that although total expenditure was reduced, mainly due to a 21.9 per cent fall in capital outlays, total revenues and grants also declined.

The CDB noted that new revenue measures in 2018 turned in mixed performances.

“Collectively, a Climate Resilience Levy of eight Us dollars per night on stay-over visitors, a lowering of the value-added tax (VAT) threshold on electricity consumption, lower personal and corporate income tax rates, an increase in the personal income tax threshold, and the introduction of a tax amnesty netted lower tax revenues in 2018 relative to 2017.”

Public sector debt was 73.4 per cent of GDP at the end of 2018. The stock of public debt outstanding increased by 3.2 per cent to US$1.62 billion. Government’s debt service obligation rose to 30.8 per cent of revenue on account of new loans and interest rate increases

But the CDB noted that improved economic conditions supported favourable outcomes in the financial sector.

It said over the 10 months to October, domestic credit increased by two per cent reflecting higher lending to government, private households, construction and retail.

“Financial soundness indicators for capital adequacy and nonperforming loans improved and remained in line with regulatory requirements, although key vulnerabilities remain in the banking sector. De-risking, in particular, and the attendant constraints on banking business, continues to present risks to stability.”