Hard feelings remain after MP ‘withdraw the a**’ 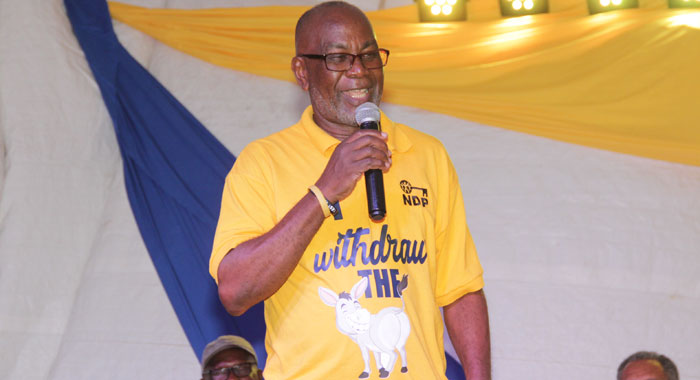 Tension continues between a government minister and an opposition lawmaker over an outburst in Parliament recently.

During the meeting of Parliament in February, Member of Parliament for Central Kingstown, St. Clair Leacock shouted across the aisle to Minister of Works, Senator Julian Francis, his schoolmate, telling him that had he finished his education he would not have been “making an a** of himself”.

Leacock quickly told the Speaker, “I withdraw the a**”, adding, that as a matter of fact, he “withdraw” the whole statement.

But Leacock, at a rally of his New Democratic Party in Layou on March 9, wore a t-shirt printed with the words “I withdraw the” and an image of a rearward looking donkey.

Then at the meeting of Parliament last week Monday, March 11, Leacock asked a question about cleaning up Kingstown.

“As I commit as MP for Central Kingstown to the clean-up of the city in the 40th year of our independence, would there be proper recognition and accommodation of my buy-in to exercise, such as (a) proper ablution facilities in the Heritage Square area and the toilet in Bay Street opposite Little Tokyo, (b) at least designs for a boardwalk along Little Tokyo to North River Road and to clean all that is now unsatisfactory and ugly with the seafront development, and (c) a phasing improvement in our sidewalks using different masonry or finishes over the existing cobblestones?”

Francis answered the question then said:

“But I just want to say this, Mr. Speaker: on buying in on the ideas of the honourable member, Mr. Speaker, I want to lodge that a statement was made in this honourable house when the honourable member did a withdrawal. He made a statement and referred to a member, which was me, as an ‘a’ double ‘s’. He withdrew it. Saturday night, I saw him at a public meeting in Layou in a polo yellow shirt, printed, “I withdraw the’ and the rear end of a donkey printed on his shirt.”

“So, you were on my jersey?” Leacock said.

Francis added: “‘So I withdraw that’ has now become a badge of honour for the honourable remember to wear in public. I will find it difficult, therefore, with that sort of thinking, to take the buy-in ideas of the Honourable Member for Central Kingstown.”

The issue came up again last Saturday night at the NDP’s rally in Georgetown.

As Leacock began his speech someone at the front of the crowd made a comment about coconut water and Leacock told him not to worry about that.

“… I had to laugh. I thought this thing did die down. I go in Parliament last week, a man get up and speak, say what he had to say and then he tell the Speaker I had he on my jersey last week in Layou. This look like Julian? … Tell me good. Julian dey pon my jersey? I never see nothing so. He go in Parliament and say I ha’ he pon my jersey. This is Julian? My god. He really shudda stay in school.”

At the end of the speech, Leacock said:

“Yellow Bird ah dem nah people pickney, too? I am the product of vending. When I was going Grammar School ah was coming down the road on Friday evening with tin tray to carry to … bakery on Middle Street to bake bread. And where horse reach, donkey go reach but this donkey like it ain’t wah reach — unless this one is a jackass.”

4 replies on “Hard feelings remain after MP ‘withdraw the a**’”