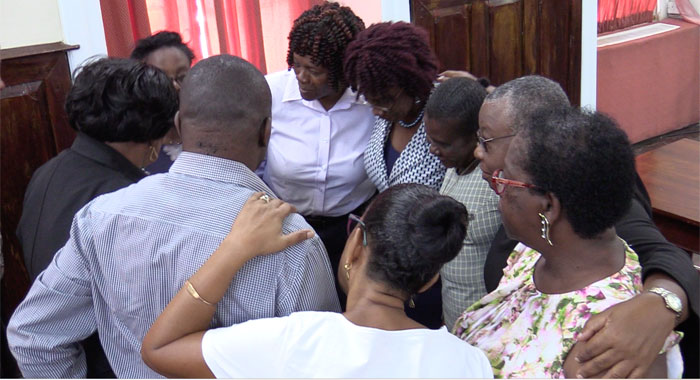 Some of the respondents in the case, including former Supervisor of Election, Sylvia Findlay-Scrubb huddle inside the courtroom after the judgement on Thursday. (iWN photo)

Lauron “Sharer” Baptiste was challenging the announced victory of Montgomery Daniel of the ruling Unity Labour Party for a fourth consecutive term in office.

The NDP’s Benjamin “Ben” Exeter was asking the court to overturn the announced victory of Sir Louis Straker of the ULP.

Sir Louis came out of retirement after five years for another go at the polls in a district that he had represented for four terms.

The ULP was declared winner of the election by eight seats to the NDP’s seven, thereby securing a fourth consecutive term in office.

In dismissing the petitions, Justice John said that while many issues had been raised during the trial, the only evidence he had found was of partiality towards the ULP’s candidate by the returning officer for Central Leeward, Winston Gaymes.

In a summary of his judgement read out in court, Justice John said:

“Some of the more important issues that have arisen in the case were: Were the ballot boxes used in the conduct of the election in compliance with the law? Were ballot papers pre-printed with the official mark? Were Form 16 statements of poll provided at the final count for all polling stations? After voting, did voters fold the ballot paper in such a manner that the initials of the presiding officer and the official mark became visible only upon opening the ballot? Did the Supervisor of Elections provide polling lists for the constituencies of Central Leeward and North Windward to the candidates in accordance with the established practice? Was there evidence of breach of secrecy? Was there evidence of partiality? Was there a failure on the part of the respondent to provide a proper paper trail for the form 16 statement of the poll.

“All these issues were canvassed during the trial and save for evidence of partiality, the court has found no evidence to support them.

“It therefore follows and the court is satisfied that the issues conducted in Central Leeward and North Windward were conducted substantially in accordance with the laws as to elections in the State of St. Vincent and the Grenadines and the acts and omissions of the presiding officers and the returning officers were not such, either separately or collectively, to affect the final result of the result of the elections.” He declared that both Daniel and Sir Louis were validly returned as Members of Parliament for North Windward and Central Leeward.

The court also ordered that the petitioners pay the respondent’s costs — to be assessed, if not agreed.

Justice John said there are a plethora of decision cases in the United States and the United Kingdom as to how the court ought to approach election petitions.

The judge, however, said that in the Caribbean region, the case of Quinn Leandro and Jonas is considered the most authoritative.

He pointed out that in that case, the court ruled that an election court would not invalidate an election on the ground that there was substantial noncompliance with electoral law if the breach of electoral procedure stipulated by law was trivial.

Accordingly, an election court would only invalidate an election on that ground if the judge were really satisfied that the breach was serious.

Justice John said that what has emanated from all the cases is that each case must be decided on its own peculiar facts.

He said that in the North Windward and Central Leeward case, the court had carefully analysed the evidence of each of the witnesses, particularly of the two petitioners.

The court had also paid especial attention to the evidence of Maia Eustace and Shirlan Zita Barnwell, two lawyers who were also acting on behalf of the NDP on election day and during the final count.

Also receiving special attention was the evidence of witnesses for the respondents, namely the Supervisor of elections Sylvia Findlay-Scrubb, the returning officers and the presiding officers, the judge said.

Justice John said that the court had noted, with a level of disquiet, the finding of the Organisation of American State’s electoral observer mission regarding the partiality of Gaymes toward the ULP’s candidate in Central Leeward.

The judge said that “not surprisingly” Gaymes did not attend the hearing to give evidence and no explanation was proffered on his behalf.

“Further comments about Mr. Gaymes are contained in the judgement,” Justice John said.

He said that as previous cases have shown, mistakes have been made in almost all elections.

“But it is necessary for the court to determine whether such mistakes were wilfully or erroneously done. That mistakes and or errors were made in the instant election is not in dispute.

“The critical questions for the court’s determination are: Were the elections fair and free? Can it be said that the election was not conducted substantially in accordance with the law applicable to the election?

“And if the answer to ‘2’ is in the affirmative, that is to say, that the elections were conducted substantially in accordance with the law applicable to elections, does it appear to the court that the act or omissions by the returning officers and presiding officers were such that they have affected the final result?”

Justice John noted that the petitions were concerned only with the North Windward and Central Leeward constituencies.

“There is no complaint before the court with respect to the elections conducted in 13 other constituencies,” he said, adding that the court must resolve several issues raised on the evidence elicited from the witnesses who attended the trial, gave evidence and subjected themselves to cross examination.”

Justice John said that during the court trial, he paid close attention to the demeanour of the witnesses.

He said that the court had, uppermost in its mind, the legal authority that states that the major issue at stake in an election petition is not the private right of the petitioner but the rights of the public.

“There should be free and fair elections held under conditions which could ensure the free expression of the opinion of the people,” he cited the authority as saying.