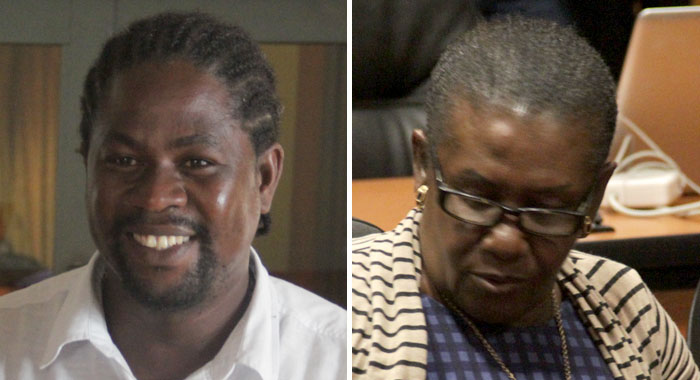 The court ruled that presiding officer Veronica John, right, was wrong to refuse to take the ballot of voter Deryck Smart, left, amidst and allegation that he took a photo inside the polling station. (iWN photos)

There is no rule prohibiting a voter from taking a photograph of their ballot after casting their vote.

That was the finding of acting High Court judge Justice Stanley John, who ruled on, March 21, that a presiding officer was wrong to refuse a voter’s ballot amidst an allegation that she had seen a flash and heard the click of a camera.

The petition alleged that Veronica John, the presiding officer at polling station NWI, refused to allow voter Derrick Smart to deposit his ballot because she was of the view that he had taken a photograph of his ballot in the voting booth.

In his ruling, Justice John said that the court was not being asked to determine whether Smart took a photograph.

“The question is whether or not the presiding officer was correct in what she did,” the judge said.

He said that the court had not found any rule that precludes a person from taking a photograph.

“It follows therefore that the presiding officer fell into error,” the judge ruled, adding that there was, however, no evidence that John acted deliberately or with a malicious intent.

“She was genuinely of the view that the taking of a photograph was not allowed in the voting booth. The court therefore adds the vote of Derrick Smart to the tally. Having done so, the result of the election is not affected,” the judge said.

In his ruling, Justice John dismissed the petition and upheld the election of Montgomery Daniel of the ruling Unity Labour Party.