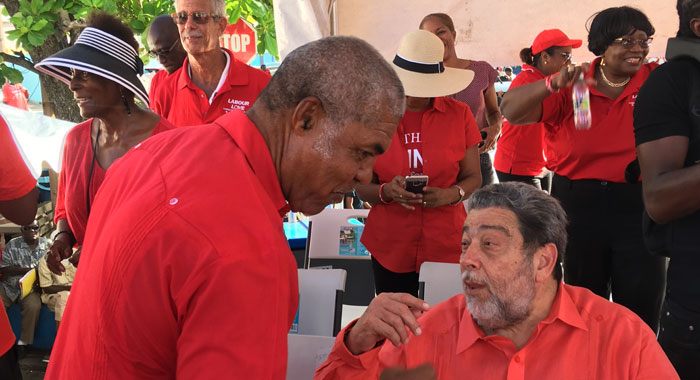 Prime Minister Ralph Gonsalves says that after 18 years in office, his Unity Labour Party has not run out of ideas, but the New Democratic Party was on a decline after just a decade.

“Ten years, Mitchell was tired, the NDP was exhausted, and they had nothing else to do,” Gonsalves told a rally in Kingstown last Thursday to celebrate the ULP’s 18th anniversary in office.

“People took to the street, thousands of people, because of the wickedness of the NDP government.”

Gonsalves said that his government has charted a course.

“And the course we charted, we said we must build a modern, competitive, post-colonial economy, which is at once national, regional and global and we say there are many cross-cutting issues which we had to put in place. The first one was education.”

Gonsalves said that in putting the economy on a different footing, skills are needed.

He said that in order to develop services, a proper air transport system is needed, hence his government’s construction of the jet airport in Canouan and the International Airport at Argyle.

“They say neither could be done. Remember [former NDP leader, Arnhim] Eustace, said where you get the money from, find it from where? We built it…” the prime minister said of the airport, which opened in February 2017, about eight years behind schedule and at twice the initial estimated cost.

He said another cross-cutting issue is energy, adding that his government said it would wean the country from oil because the fuel surcharge brings a lot of pressure.

Gonsalves said that the government is on target to have almost 75 per cent of its electricity generated by hydro, solar or geothermal.

The prime minister said the government has plans for over 2,000 new hotels room to be completed by 2021, including Black Sands Resort and a private sector development at Mt Wynne-Peter’s Hope.
There will also be a 250-room government-owned hotel built at Mt Wynne and Buccament Bay Resort, which has been closed since December 2016 and will be up and running with 200 rooms.

In addition, the government will build a 93-room hotel at Diamond to be operated as Holiday Inn Express and Suites.

Other investors want to build a 150-room hotel, Gonsalves said.

He told the rally that a call centre will start in May with 50 people and is expecting to ramp up to 300 within 18 months.

The prime minister said an agreement will be signed on Wednesday, for an $8 million fisheries processing plant at Calliaqua.

Medical cannabis will provide opportunities for people in SVG at the agricultural and medicinal ends, he said.

“You will notice the way in which the ideas are just coming. It’s 18 years and we ain’t run out of ideas. You know why? We have a developmental narrative, we have a national social and economic plan, 2012 to 2025 and we will update it as we come toward 2025. And, as Arnhim say, if you have any question, ‘Ask Ralph.’ If you have any question about these matters, ask Ralph.

“I’ll tell you this, the prestige of this country is higher than it has ever been and the world recognises the good governance in our country and our democratic, protection of individual rights and freedoms, the independence of our courts, all of these things we get high marks for. We get high marks for not having corruption in government by all the international agencies.”

Gonsalves referred to the bible book of Chronicles which discusses the leaders of the 12 tribes of Israel.

He said that the leader he liked the most was Issachar because he said that to lead, one must know the time and act accordingly.

“You have to know the condition of your country and the world around you and you have to act accordingly. That is why I love that man. And, as we implement things – the number of things I have to subject myself to, sometime they must be wonder how I ha’ the strength. But I don’t allow negativism to pull me down. I don’t allow it at all.”

Gonsalves also expressed confidence that in June, SVG will be elected as the smallest country ever to sit on the United Nations Security Council.

“We’re lifting the country in every single dimension. In sports, in culture,” he said, noting Kishore Shallow’s election as vice president of West Indies Cricket and Skinny Fabulous’ road march win in Trinidad and Tobago.