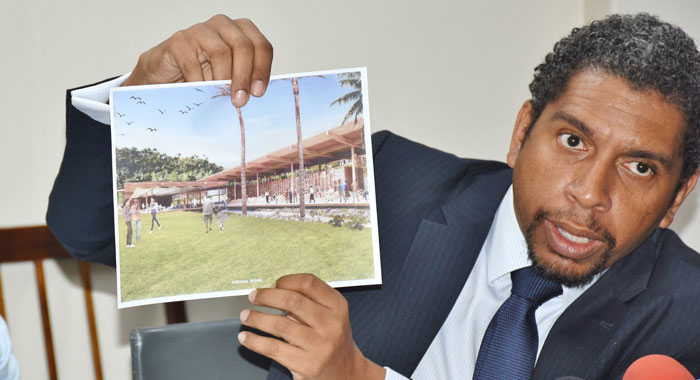 Minister of Finance, Camillo Gonsalves holds up an artist impress of one of the hotels that his government plans to build. (Photo: Lance Neverson/Facebook)

Minister of Finance, Camillo Gonsalves said that the 1,000 or so hotel rooms that are expected to open in St. Vincent over the next two years are a critical part of providing jobs.

The government of St. Vincent and the Grenadines is building a 250-room hotel in Mt. Wynne and a 93-room Holiday Inn Express and Suites at Diamond.

He said that the Mt Wynne hotel, the management deal of which is yet to be announced, will employ roughly two people per room on completion.

“I am not talking about the jobs in the construction phase which will be tremendous,” Gonsalves told a ceremony on Tuesday at which his government signed a US$50 million loan agreement with the Export-Import Bank of the Republic of China (Eximbank) for US$50 million, for hotel construction.

“So you are talking 500 employees at Mt Wynne and Peter’s hope and the facility at Diamond being a single block, not as many stars. They will employ another 75 or so people,” Gonsalves said.

Black Sands, which is being built by Canadian investors, broke ground in January 2017 and the first set of rooms are expected to open later this year.

“That is going to employ another 750 people and then you are talking about the Buccama Resort opening again,” Gonsalves said, of the resort, which has been closed since December 2016.

“That is going to employ another 100-plus people,” he said of the Buccament Bay Resort.

“I don’t have to explain how much of a boost that will be to economic activity, how much that will help to relieve some of the pressures on young people who are seeking employment in the hospitality sector and how much it will spur economic activity both in the Diamond area and on the leeward side of St. Vincent and the Grenadines,” Gonsalves said.