The illegal, audacious, arrogant action of British man in Bequia 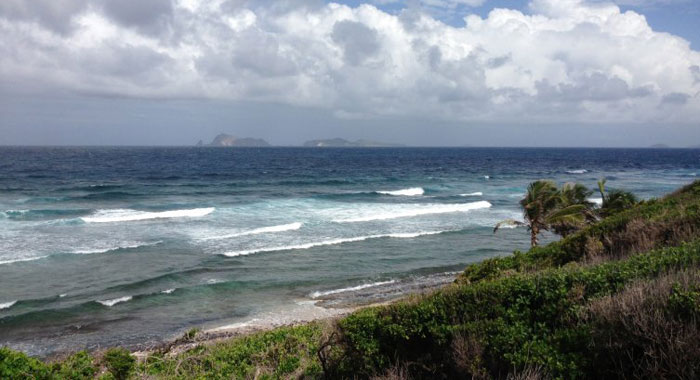 According to the official map of Bequia, Ansela Coite is that large under-developed area to the east of Spring. From almost anywhere in that area, the historic island of Balliceaux, where hundreds of the Garifuna people perished at the hands of the British, is in full view.

The government is currently selling the land half-acre plots at prices very few (I’ll hazard a guess of 5 or less) Vincentians can afford.  Thus far, the government’s sales-drive has attracted one person, a British man. As a result, Coite now has one resident. Unbelievable but true: In the very week the people of St. Vincent and the Grenadines celebrated National Hero’s Day, this lone resident whose only connection to the state is his house, and who wakes up in clear view of the symbol of our past struggles, audaciously and single-handedly chose to CHANGE THE NAME OF THAT SECTION OF OUR COUNTRY.  So overnight, according to the sign he erected, and to the astonishment of those who noticed it, the name “ Coite” ceased to exist. He renamed the area and called it “PARADISE COVE”.  The office of the Deputy Director of Grenadines Affairs and the Department of Land and Surveys confirmed that this action is illegal as there has been no formal request, and hence no approval for the change of name.

Apart from being illegal and insensitive to our past struggles, this man’s action appears to be a blatant and deliberate display of arrogance and an “I-can-do-as-I like” attitude.  As such, the incident at Ansela Coite is divisive and clearly unacceptable for several reasons. Therefore, it should be challenged. It should be challenged in a way that reassures all Vincentians that such behaviours will not be tolerated in our country; and in a way that sends the clearest message to ex-pats with similar intentions. There can be very little doubt that if the authorities fail to deal with matter decisively It will be setting a dangerous precedence with dire consequences for community relations.   No one wants that.

This incident has so incensed residents who realise what was going on that within days their frustrations were clear: the solar lights were ripped from the posts and the words “PARADISE COVE” plastered over. Rightly or wrongly, this was merely a demonstration of anger directed not only at the audacity of the individual for what he did but also at the ineptitude of the authorities.  This demonstration of the people’s anger should not, however, rid the authorities of their responsibilities in taking the legal actions necessary to resolve the matter. Therefore, masking the offending signs is not enough. It is not enough also because it leaves unanswered some fundamental questions. Among which are a) What makes an individual with the loosest of connections to the State believe he has the right, and the freedom to break the law and changed an officially mapped and locally recognised name of a section of the country? b) Was this a test run for something more daring, say, erecting a gate with the intention of denying locals access to the area?  These are serious concerns for which a prompt and decisive response would have been reassuring.  But despite a formal letter of complaint (dated March 25th, 2019; two weeks after the sign went up) to the relevant office in Bequia, there is no evidence that the issue is being addressed. In fact, there has not even been a formal acknowledgement of the complaint.  Make of that what you will, but when one considers that that individual has blatantly broken the laws of the State, the noticeable silence of the authorities is very worrying.

By doing what he did at Ansela Coite, the Brit has openly and boldly broken the law and pushed two fingers up the faces of all Vincentians, no doubt with the belief that no one dare questions his action.  Why? Because for some time now, while the authorities stand idly by, the people of the Grenadines have witnessed a disturbing trend: a drip, drip, deceptive erosion of their rights and privileges. This incident is just another in the long list of examples of that trend.  And while the erosion of our rights continues unabated, the lack of confidence in the current administrative setup in Bequia and the ever-diminishing influence of the local population over local affairs, (no doubt is a direct result of the abolition of local government), leave the people powerless in situations such as these.  Therefore, it should come as no surprise that people took it upon themselves to deal with the matter by removing the offending signs.  So, taking account of the inherent deficits in the system that manages the day-to-day affairs in Bequia, until we return to the policy of giving local people more say (preferably through a local elected chamber), unresolved incidences like the one at Ansela Coite will continue, to everyone’s annoyance.  The consequence of this could be very unpleasant.

22 replies on “The illegal, audacious, arrogant action of British man in Bequia”