Man says he beats girlfriend over sex with his best friend 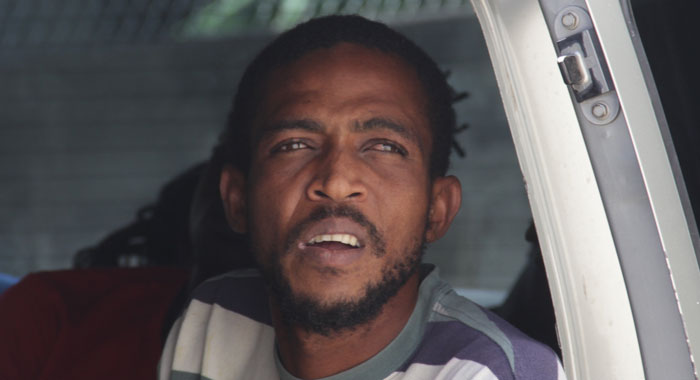 Tyson Thorpe will spend one month in jail for his crime. (iWN photo)

A Calder man who told the court he beat both his girlfriend and his best friend after meeting them having sex at his home in March, was on Wednesday jailed for one month.

Tyson Thorpe pleaded guilty on Tuesday at the Serious Offences Court, in Kingstown, to a charge that on March 31, 2019, at Calder, he unlawfully assaulted Chelsey Hanson, of Sion Hill.

The court heard that Thorpe and Hanson were in a relationship.

About 9:30 p.m. on March 21, they were in Calder and, without reason, Thorpe began to beat Hanson about the body.

After beating the woman, Thorpe began to laugh.

Hanson went to the Stubbs Police Station and filed a report, leading to Thorpe being charged.

In mitigation, Thorpe, who was unrepresented, told the court that he left Hanson, his girlfriend of four months at home and went to the shop.

He said that when he returned after 20 minutes, he met her “brushing” with his best friend in his (Thorpe’s) home and she refused to stop when he asked her to.

“So yuh leave her and go shop for 20 minutes and you trying to tell the court that by the time you come back that a man come in your house and had relations with her and the two of them see you dey and they continue?” Chief Magistrate Rechanne Browne asked the defendant.

Thorpe maintained that the woman and his best friend continued to have sex even after he caught them.

At this time, Senior Prosecutor Adolphus Delplesche asked the accused if he had beaten his best friend.

“I give him two plan,” Thorpe said, referring to beating someone with the flat side of a cutlass.

In response to the magistrate’s question of whether his best friend had reported against him over the planning, Thorpe said no.

“He say this thing been going on long time,” Thorpe said, and the magistrate said that made no sense.

Thorpe told the court that he beat his girlfriend with his hands and she has since “gone by another man” — different from his best friend.

“So how you know she’s there? You real upstarted,” the chief magistrate told the man.

“Whappen? She the best man-finder?” the chief magistrate further said and urged Thorpe to stop maligning the woman’s character.

She said that a relationship of four months is not even proper courtship.

At this point, Delplesche told the court that his position has always been that if two people cannot get along they should “go their merry way”.

“And I am with you,” the chief magistrate added.

Delplesche continued: “Because we are a civilised society and your girlfriend, your boyfriend, your husband, your wife is not your chattel; they are not your property.”

His said that if one cannot get along with his or her significant other, “take up your Georgie bundle, my grandmother would say, and go about your business”.

Delplesche said that whether Thorpe had met his girlfriend in a sex act, as he claimed, that is not a mitigating factor.

The chief magistrate agreed, saying it is an aggravating factor, since the woman was in a vulnerable position.

Delplesche said: “She has no injuries, but she got some blow… The injuries may be inside.”

The magistrate said her difficultly with the accused man’s explanation was that he said that after leaving for 20 minutes, he returned to find his girlfriend and his best friend in a full-on sexual encounter that could not be broken.

“You did not think about walking away. You, in fact, inflicted injury or harm to the person and it’s aggravating because if that is so, the person is in a vulnerable state.”

She told the man that if he cannot get along with a woman he should just go his way.

She told him that he also had no reason to plan his best friend.’

But Thorpe defended his action, saying that his girlfriend doesn’t work anywhere and that he did everything for her.

“Me ha’ fuh even wash she’s clothes, everything; do everything for she,” Thorpe said.

“Well leave!” Delplesche told him, adding, “You could have gotten yourself into more serious trouble. That’s my point. Leave. That’s no excuse.”

Also on Tuesday, Thorpe pleaded not guilty to a charge that on March 15, 2019 at Calder, he entered the liquor and provision shop of Claude Thomas, of Calder, as a trespasser and stole three bottles of Sunset Strong Rum, value, EC$90, Thomas’ property.

Delplesche told the court that he understands that detectives in Calliaqua and Kingstown were looking at a series of burglaries in which Thorpe is a person of interest.

He asked the court to remand the man into custody for at least a week on the burglary charge.