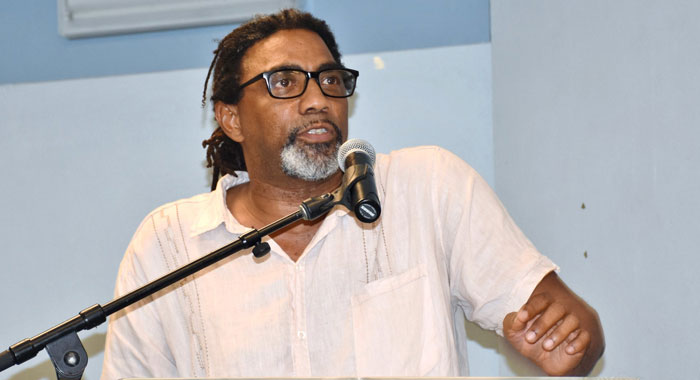 The publication of a book by St. Vincent and the Grenadines’ Minister of Finance, Camillo Gonsalves, is “a statement on the level of development of Vincentian democracy”, a University of the West Indies lecturer said Monday in his review at the launch of the monograph.

“The publication of a book by any political leader is a democratic act.  By publishing, the political leader is showing that she has respect for her public, and that she is unafraid to make available for public scrutiny what her thinking is on the critical issues of the day,” Tennyson Joseph said at the launch of “Globalised. Climatised. Stigmatised.”

The book is a 186-page collection of essays about the specificities, opportunities and developmental challenges of small island states and is published by Strategy Forum Inc., Kingstown, St. Vincent.

“For the true democrat, the urge to publish kicks in whilst occupying office, not after retirement,” Joseph told the standing-room-only audience at the Calliaqua Town Hall.

Joseph said that the “genuine democrat” is also unafraid of criticism, and by publishing openly, is inviting “even their most bitter rivals to read and criticise their ideas.

“Sophisticated public criticism is like oxygen to the true democrat,” said Joseph, who lectures in political science at the University of the West Indies in Cave Hill, Barbados.

Some of Gonsalves’ critics and political detractors have dismissed the book as “vanity press”, locating it within the context of the upcoming general elections, constitutionally due by March 2021.

The election is taking place within the context of the announcement by Prime Minister Gonsalves that he will seek a fifth consecutive term at the helm of his Unity Labour Party (ULP) government, rather than transitioning to a younger leader, as he promised in the campaign for the 2015 vote.

Political commentators say that, among other things, the finance minister’s book is intended to further distinguish him from his closest rival in the ULP, Saboto Caesar, the country’s agriculture minister.

This appeared not to be lost on Joseph, who said in his review that the publication of any book is “a political act”.

“The very definition of the word publication tells us that it is for the public and thus inherently political,” he said.

The university lecturer said that in contrast to the genuine democrat, the authoritarian leader “hardly publishes, except what he considers to be self-serving propaganda.

“By his very nature, he is opposed to explaining his actions to anyone and he is an enemy of the principle of public scrutiny into his thinking.”

Joseph said this might explain why so many Caribbean leaders who, despite serving sometime decades in public life, have died without publishing “anything which can guide the next generation”.

“They have gone without even leaving behind their version of events, even if only for the sake of history,” Joseph said.

He said anyone who doubts that authoritarian leaders are hostile to publishing should consider the case of Eric Williams — the first prime minister of Trinidad and Tobago, who served from 1962 to 1981.

Joseph said that as a historian from Oxford University, Williams was a prolific writer of books.

However, as a political leader during the 1970s black power period, Williams was the sponsor of a ban on subversive literature, “which incidentally, might have even included some of his own books,” Joseph said.

“I therefore congratulate Camillo for his democratic maturity in publishing the book and indeed, for doing so, at such a relatively early stage in his public life,” he said of Gonsalves, who was appointed a ULP senator in 2013 before winning the East St. George seat for the party in the 2015 general elections.

Joseph said that in reviewing the book, he wanted to locate the Gonsalveses “in that second and more noble tradition of political leaders who don’t see a separation between making history on one hand, and thinking and writing on the other.

“It would be a huge mistake if we were to underestimate the book’s importance as a statement of maturation of the generation-in-waiting insofar as the trajectory of political leadership in the Caribbean is concerned.”

He said that no one should miss the importance of the book’s publication “as a signal of the readiness of the next-in-line generation to carve for itself a new mould that breaks away from the anti-intellectualism that has, with a few minor but prominent exceptions, marked Caribbean leadership, for the most part, for far too long”.

The academic said that for him, personally, the book “is like my generation’s ‘redemption song’.

“It rekindled my hope and confidence that at least some elements of the second level of Caribbean political leadership are aware of the existence of an alternative model of political leadership and, more so, that it had demonstrated the capacity and the sense of responsibility to actually implement the model.

“After reading the book, I was left extremely satisfied that a leading political personality from my generation had demonstrated concretely that he had the wherewithal to marry political leadership with intellectual reflection, and to do it well. So, on that basis alone, without making any comment as yet on the content and argumentation in the book, Camillo deserves our loudest applause and our deepest appreciation for restoring hope that the small but powerful intellectual-leader tradition, which we know exists, but we do not see too often, is not going to die with the changing of the guard, whenever that change comes,” Joseph said.

Joseph stressed the “the significance of the publication of the book in cementing St. Vincent and the Grenadines as one of the leading contributors to the intellectual and political life of our Caribbean civilisation.”

He said that the book has come out of a household that has “spawned the several publications of Ralph Gonsalves combined with his several decades of regional political activism and leadership”.

“… and now with the publication of Camillo’s book, it is difficult to think of another Caribbean family which has made a more profound contribution to intellectual and political life of the Caribbean than the Gonsalves household in the last 50 years,” Joseph said.

“Only the Manley family of Jamaica and the Lewis family of St. Lucia spring to mind as potential equals.  It is an achievement I hope is not lost on the public of St. Vincent and the Grenadines which nurtured Ralph, and which has spawned Camillo.”