The roots of Vincentian crime 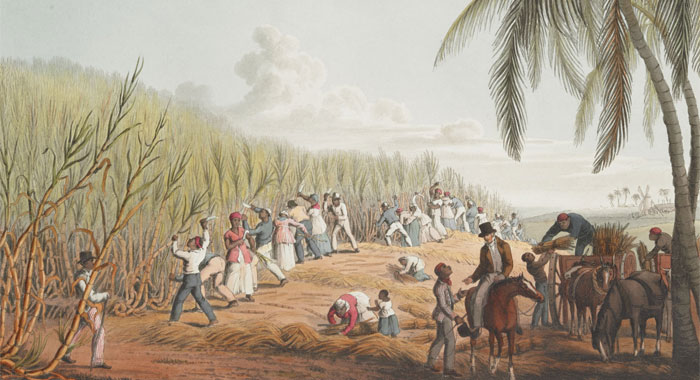 The aristocratic and well educated Scottish wife of a slave-owning sugar planter, Alison Charles Carmichael, better known in the travel writing literature as “Mrs. Carmichael” because her given names have only recently been determined, is still recognized for the published account of the nearly three years, 1820-1823, her husband owned and managed a plantation close to the capital on the mainland of St. Vincent and the Grenadines (SVG).

Mrs. Carmichael’s moral and political views were unapologetically pro-slavery and she was remarkably, though understandably, naïve about the transparently feigned obsequiousness of her slaves as seen by her shock at their dramatic attitudinal transformation in response to vague rumours circulating about abolition:

“… [T]hey looked upon me, being their proprietor [owner], as necessarily their enemy …. [A]nd those I had done the most for, and who were the most intelligent and best knew their duty, turned out to be immediately upon the arrival of the commissioners [sent from England to study the conditions of the slaves] the most worthless and disreputable of all characters” (ibid., p. 245).

This was no Stockholm syndrome: one of the most basic slave survival strategies was to pretend to gladly accept their bondage.

Despite her ethnocentric and patronizing perspective (which was certainly not confined to life among the slave population but referred to all sectors of society, including the plantocracy), Mrs. Carmichael has left us with a detailed, first-hand account of the “domestic manners” of bonded people, nearly always reported in the slave vernacular. Her carefully crafted and elegantly written work deserves close reading if only because of its strong correspondence to the content of many other studies written long after.

There are other indications of the veracity of her observations, always documented with detailed anecdotes.

Concerning the understandably promiscuous nature of slave family life —reasonable because the legal “father” of the progeny of slaves was their plantation owner — she opines that:

“… The negro cares little for his father; but many are a loss upon this subject, for there are not a few females who are sufficiently cunning to obtain presents for their child from two or more men, whom they separately claim as the fathers of their children” (ibid., p. 297).

This practice is still widespread in contemporary Vincentian society: today, many suspicious men demand a paternity test to ensure they are both the social and biological father of the offspring of their extra-marital unions.

Mrs. Carmichael also has much to say about the shallowness of religious conviction among slaves stating that they:

“… say their prayers every evening … can say the Lord’s prayer, and many can repeat the Creed; they all know the sin of swearing, lying, theft, &c… but when I saw that it did not affect their practical conduct in the slightest degree, I of course was aware that it was merely a passing ebullition of feeling” (ibid., pp. 220, 223).

Religious hypocrisy and shallowness of belief still apply 200 years later throughout our society.

In short, that much of Mrs. Carmichael’s account of slave behaviour in SVG, as morally biased as it was, continues to echo here in form and content, even if for different motives and with different consequences, only adds to their credibility as do her many examples of “… lying, theft, fighting, cruelty, or slandering their neighbours” (ibid., p. 230).

Theft and Deceit.  Mrs. Carmichael first confronted what she mistakenly and arrogantly called a “defect of character,” always ignorant that they were important strategies for coping with the brutality of the slave system, on the first day she arrived in SVG:

“I was shocked to see many of our servants [house slaves] so badly clothed, particularly as they informed me that they had no other clothes, not even having a change; and they declared they had not received any for some years. Of course they were soon well clothed…. Shortly afterwards it was ascertained that they had recently received clothing; yet they firmly denied it, — and it is supposed they had sold it …” (ibid., p. 257).

Mrs. Carmichael also asserts that various forms of deceit, still visible today, were also widespread and highly perfected among the mulatto population, both free and slave:

“They are extremely plausible, and great talkers; and make a point of telling not only all they know, but what is worse, all they chose to invent” (ibid., p. 71).

Few forthright Vincentian observers could deny that compulsive dissembling, from the top to the bottom of our class-stratified society, is our most conspicuous moral defect.

Her main focus, however, was on her slave population and she gives many examples of theft, sabotage, and deceit by domestic slaves, including stealing food, clothing, jewelry, and alcohol, and breaking household items, leading her to conclude that:

“Negroes will steal, cheat, and deceive in every possible way, and that with a degree of adroitness that baffles the eye and the understanding of any European; and what is worse, they invariably get into a passion if you refuse to take the book [Bible], and [let them] swear to the truth of what you know is false. They have not the slightest sense of shame…. The elder negroes teach theft to their children as the most necessary of accomplishments; and to steal cleverly, is as much esteemed by them as it was by the Spartans of old…. [T]ruth, honesty, or any fear of false swearing, is unknown to the negro character” (ibid., pp. 263-265).

Though they had little opportunity to steal from their master’s house, she claims field slaves chronically stole sugar cane during the harvest season:

“… this they universally do, for two purposes, feeding their hogs, and selling to huckster women, who buy the juice from them at the rate of fourpence a bottle sterling …. The consequence is that all slaves, but especially those in the vicinity of the towns, live a great deal annually upon plunder …” (ibid., pp. 103-104).

Feigning illness as part of a larger pattern of deceit was especially common, she claims:

“Negroes have more imaginary diseases than any set of people I ever was amongst: they are fond of quackery, and often defeat the whole treatment of their medical attendant by taking nostroms of their own [i.e., what is today called “bush medicine”] …. Monday morning is always a great day for the sick; all lazy or ill-disposed negroes come into the hospital [estate clinic] at least once a week and, and sometimes oftener” (ibid., p. 204).

Corresponding observations like this, especially the lineup of people with the slightest affliction at every free health clinic across that land, can easily be made and verified today, again pointing to their historical antecedents and veracity.

Violent Behaviour. Though not formally enforced under the Vincentian slave code or other laws, physical assaults involving slaves that are now considered criminal were also common, she says:

“Nothing can be more absurd than to talk of the gentle negro; — they are passionate and furious beyond all description; they flog, bite, kick, pinch, spit, and fly at each other like wild beasts, and all often about the merest trifles. [Common-law] Husbands are most cruel to their wives, and will not under any circumstances be persuaded to desist from flogging them…. Negro mothers … beat them [their children] unmercifully for perfect trifles …” (ibid., pp. 265-266, 269).

Looked at from a dispassionate contemporary perspective, such acts of violence appear as understandable responses to an inhumane slavery system where the slightest infraction could result in a severe whipping or worse. Internalized rage and acute frustration must have been widespread among the slaves who had few outlets for their release other than redirecting them against the even more powerless persons around them – their women and children — an excuse that could never be used to justify such cruel behaviour as it occurs on a daily basis throughout the length and breadth of SVG, one of the topics of my next opinion piece.

This is the seventh in a series of opinions on crime and the economy in SVG. Find the rest here.

8 replies on “The roots of Vincentian crime”