Minister looking into beef shortage amidst cattle exports to Grenada 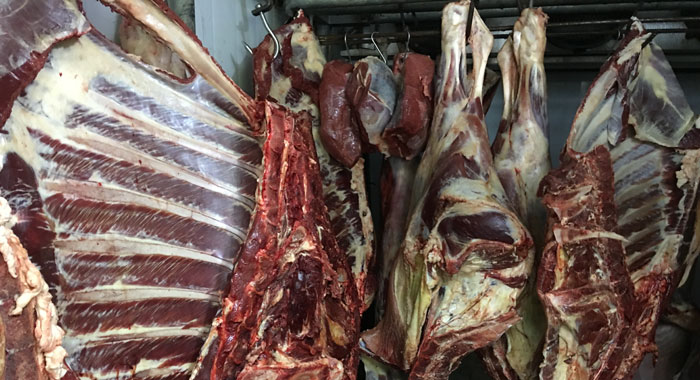 Minister of Agriculture, Saboto Caesar says his ministry is looking into the reported shortage of cattle in St. Vincent and the Grenadines amidst annual exports of an estimated 800 heads to Grenada.

He said that his ministry had anticipated that the decision to export cattle to Grenada would have reduced the local stock, but not to the point of a food-security concern.

Caesar spoke to iWitness News on Tuesday after the publication of an article in which two butchers complained about problems sourcing enough cattle for slaughter to supply the Vincentian market.

“Now, we envisaged that the national stock will be reduced but not reduced to the extent that it would cause a food security issue,” Caesar told iWitness News.

“Therefore, we reintroduced artificial insemination where they brought in semen as a gift from the government of Jamaica: red poll, black poll and for those into milk, they also brought in the Jamaican Hope.

“And we have a cadre of farmers we are working with,” Caesar said.

“Now, the butchers are accustomed to paying a certain price and what we are seeing now is that there is competition between butchers in St. Vincent and the Grenadines and butchers in Grenada. And the butchers have complained that this has caused an increase in the cost for the cattle. Not only an increase in the cost for cattle, but there is a carving out of some cattle farmers by the purchaser in Grenada.”

The agriculture minister said this means that when local butchers go to buy cattle from some farmers in SVG, they would say they already have a relationship with the buyer in Grenada.

Andy Davis, one of the butchers who spoke to iWitness News, said he pays, on average, EC$2,500 for a head of cattle that would yield 500 pounds of beef.

Caesar told iWitness News that the Grenadian buyers pay an average of EC$2,000 per head.

Caesar told iWitness News how his ministry intends to address the situation.

He said his ministry has already published a newspaper advertisement for the establishment of cattle feeding lots.

“This is where we are going to concentrate the production of cattle in a small area and we are asking persons in the private sector to work along with the government in a public-private partnership to engage in the establishment of these feed lots.”

This will address the situation “because we will increase the production and the productivity of the cattle,” he said, adding that several persons have already signed up.

“So you have a smaller parcel of land and you cut and carry and we will assist you with the genetics and we would also help you with the vets to ensure that you have the proper feeding, the proper systems in place to fatten the animals in a short space of time so that we can increase the numbers.”

He said that would include feeding the cattle from the mills.

“A lot of feed from the mills.”

The minister said cattle buyers in SVG say that because the country is mountainous the beef is hard.

“Therefore, even though we have a lot of cattle here, we still import a lot of beef products,” he said, but noted that maturing the meat properly before consumption has a role to play in addressing this.

He said a butcher from Suriname was in St. Vincent at the time of the interview looking to purchase cattle.

He said Grenada has also sent in a request to buy pigs from St. Vincent.

Caesar said his ministry would meet with butchers this week.

“Because I think what is happening, some of the butchers are not going into some of the areas. We do have a scarcity of cattle but the distribution and the established relationships that these butchers have with certain people, some of these people are now going to Grenada.”

The minister commented on the butcher’s claim that some cattle farmers are getting rid of their animals in the hope of getting a licence to grow medical marijuana.

He said that whenever there is the emergence of a new industry, there is a lot of lateral movement.

“So this is expected but we have a careful eye on the issue of food security and food sovereignty and we are not going to allow a food security issue to arise.”

He said he met with a senior government minister and St. George’s is going to put in place a framework to start their own cattle breeding to increase their numbers.

“But again, other people want cattle and it is really an encouragement. I see the article that was published on iWitness [News] as an encouragement to young persons, to entrepreneurs, to get into the production of cattle.”

He said that his ministry was in the final stages of forming a national cattle farmers association.

“And it will be very interesting to hear their take on it, because they are the sellers and I know a lot of them have a serious link with the exporter. But, again, food security is of paramount importance and we have to ensure that we have food here to feed our people.