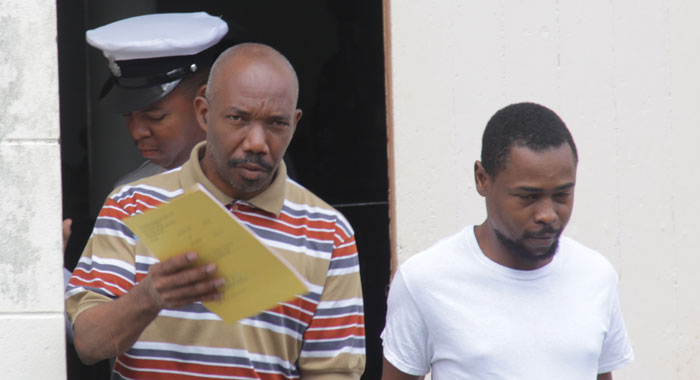 Sex offenders Sheldon John, right and Deron Henry are escorted back to prison to continue their sentences on Tuesday, after they each withdrew their appeal. (iWN photo)

Two men — one who raped an 11-year-old girl and recorded it on a computer and another who was among a group of men who gang-raped a woman — withdrew their appeals against their sentences on Tuesday.

Sheldon John and Deron Henry withdrew their separate appeals after Chief Justice Janice M. Pereira informed them that by inviting the appeal court to review their sentences, the court could also decide to increase them.

Asked if he wished to appeal his 11-year sentence for rape and buggery Henry said no, but that he would like the court to reduce the sentence.

“You will be appealing against the sentence,” the chief justice responded.

“If you invite the court to interfere with it, on the facts of this case, you will have to persuade us why we should not increase your sentence; not reduce it. So, do you want to open that door?” Justice Pereira further said.

Henry replied no, adding that he wanted to withdraw his appeal.

Earlier John had taken a similar course, having been advised by the chief justice that the court could decide to increase his 12-year sentence for sex with an 11-year-old girl.

“A wise decision,” the chief justice told John after he decided to withdraw his appeal.

John, who was not represented by a lawyer, was appealing his two 12-year concurrent sentences, for unlawful sexual intercourse and sentences of two years each for two counts of indecent assault.

Counsel Karim Nelson represented the Crown in the appeal.

The High Court could have sentenced John to a maximum of life imprisonment — considered to be 30 years — for his crime.

The facts of the case are that on a day unknown in May 2012, John sucked the child’s vagina and had sexual intercourse with her during lunchtime while she was dressed in her school uniform.

The crime was recorded on a laptop that the school had issued to the child.

Also, on a day unknown in June 2012, around lunchtime, he committed the same acts on the child.

The sentences were made to run concurrently and time spent on remand to be deducted.

However, John appealed the sentence, saying that the 12 years imprisonment was manifestly excessive.

In addition to the chief justice, Justices of Appeal Louis Blenman and Mario Michel presided over the appeal at the High Court in Kingstown on Tuesday.

When the matter was called, Justice Pereira said she thought it useful for the court to send a general warning to the accused and others that when a convict invites the Court of Appeal to review a sentence, the appellant should be aware that the court could also review the sentence upwards if it considers the sentence unduly lenient.

“So we just want to send that general warning out,” she said, adding that an appeal invites the court to look at all the circumstances and decide if the sentence is appropriate, unduly harsh, or unduly lenient.

Justice of Appeal Michel then asked John, if, having regard to what the chief justice said, if he wished to proceed with the appeal.

“No, sir. I will withdraw,” John said, prompting the chief justice’s comment about the wisdom of his choice.

When the next matter was called, the chief justice asked the appellant, Deron Henry, who also did not have a lawyer, whether, in light of what she had told the previous appellant, he wanted to proceed with his appeal.

Henry also said he wanted to withdraw his appeal.

He had been jailed for 11 years for rape and buggery of a woman.

The facts of the matter are that the victim and Henry, who were acquaintances, both attended a karaoke at a shop in Mt Bentick, Georgetown on March 13, 2013.

The woman consumed alcohol and was later dragged by several men into a plantain field and raped repeatedly.

Henry was one of the men holding the woman down.

After the incident, the woman was left wearing only her vest.

The medical report found that she had abrasions to her right forearm, knees, and her feet and there was stool around and inside the vaginal vault and there was a one-centimetre laceration.

The woman also suffered a 1 cm laceration to her anus.

On Jan. 17, 2017, Henry pleaded guilty to one count of rape and one count of buggery and Justice Kathy Ann Latchoo sentenced him to seven years four months for rape and four years for buggery.

The law provides a maximum sentence of life 10 years imprisonment for buggery.

Renee Simmons appeared for the Crown in the appeal.