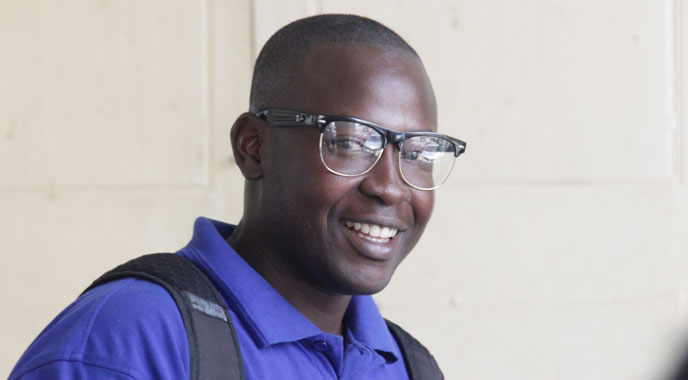 A suspended police officer who served six months in prison for three counts of deception, on Tuesday, persuaded the Court of Appeal that his trial had been unfair.

The Troumaca man told the three-member panel, headed by Chief Justice Janice M. Pereira and including Justices of Appeal Gertel Thom and Mario Michel, that Chief Magistrate Rechanne Browne had not afforded him a fair trial in November 2016.

He told the appeal court that Browne had proceed with his trial after denying an application for an adjournment by a new lawyer he had hired to defend him after his first counsel died.

Lewis told the justices of appeal that when the Serious Offences Court denied the application, his new lawyer withdrew his services, leaving him to defend himself.

On Nov. 24, 2016 at the Serious Offences Court in Kingstown, Lewis, who was then 26 years old, was found guilty of charges that on Sep. 3 and Sept. 9, 2015, at Kingstown, he, by deception, dishonestly obtained EC$500 from Kenneth Peters of Lowmans Leeward, with the intention of permanently depriving him of it.

He was further found guilty of a charge that on Nov. 20, 2015, he, by deception, dishonestly obtained EC$130 from Peters, with the intention of permanently depriving him of it.

The Troumaca resident had first been arraigned on a deception charge on March 9, 2016, after which 30 similar charges were brought against him.

All the other charges were withdrawn.

He was sentenced to six months imprisonment for each of the EC$500 deceptions and four months for the EC$130, with the sentences running concurrently.

The chief magistrate had further ordered Lewis to compensate Peters in the sum of EC$1,000 by May 31, 2017, or go to jail for six months.

Browne further ordered Lewis to compensate Peters in the sum of EC$130 by May 31, 2017, or in default, go to prison for four months. The default sentences were also to run concurrently.

During the appeal hearing on Tuesday, Lewis said that he had served the sentences which taught him a lot of lessons.

Lewis asked for a retrial, telling the court that he had not been dismissed as a police officer and was still on suspension pending the outcome of the appeal and any retrial.

“So I still have a lot to learn from this… My life has been at a standstill. I am being seen as a dishonest person,” he told the court, adding that he knows he is competent enough to be successful in a retrial.

Peters noted that he took part in his trial but did not cross examine any of the witnesses.

He said he has told the Serious Offences Court that he was not in a position to do so because he did not have the documents that had been disclosed to his lawyers.

He said that in SVG, matters are sometimes adjourned more than 10 times, but his trial took place at the first hearing.

“It was a speedy trial, super speedy” said Lewis, who also told the court that he had been treated as guilty until proven innocent.

He said he gave his evidence and was cross examined at length then the trial was adjourned so that he could bring his witnesses.

Lewis said he brought witnesses, but because he did not have a lawyer, they declined to testify.

“Your honour, if you know human beings, when they are in a certain position, they didn’t have any experience in court and the lawyer, which is Mr. Dennie, guaranteed them, gave them his word he would be in court as the lawyer to guide them in the proceedings.”

Lewis told the appeal panel that his witnesses declined to testify when they realised he was unrepresented.

He said that the witnesses are now very willing to testify, “because they see the fight I am going through”.

“And I am not going to give up because I know the trial wasn’t fair. And if the trial put to next week, they are willing to come and go in the [witness] box,” he said, adding that he is only asking the appeal court for an opportunity to get a fair trial.

“I deserve it at least,” Lewis said.

But the chief justice noted that Lewis had indicated that he had retained Olin Dennie, who later died.

Lewis told the appeal court that when he realised his matter would proceed to trial, he contacted Andreas Coombs, a lawyer in Dennie’s Chambers.

Coombs went to the court, told the chief magistrate he was unfamiliar with the matter and sought an adjournment.

However, the chief magistrate said the matter would proceed on that day, and Coombs withdrew himself from the case, according to a document submitted as part of Lewis’ appeal.

However, the acting DPP said that the clerk of the Serious Offences Court, Annetta Rodriguez had sworn an affidavit saying that she did not personally recall whether Coombs made any appearance for Lewis.

Justice of Appeal Michel noted that Lewis had said that whenever one sees “I don’t recall” in those proceedings, it is a red flag.

McDowall said that Coombs was an associate of Dennie and she did not see there would have been serious difficulties with disclosure.

However, Thom said that based on the document before the court, Coombs said he was not familiar with the matter as it was being dealt with by Dennie and he was asking for some time to familiarise himself with the matter.

“That was the first day,” Justice Thom said.

The acting DPP, however, said she is not in a position to confirm the accuracy of the document.

Justice Thom inquired about the affidavit of the clerk of the court and the DPP said that the clerk had said she could not assist the court any further.

The acting DPP said that the record of the court did not reflect what Lewis was claiming to the appeal court.

The jurist asked if that was unusual.

McDowall told the court that is the challenge with the deficiency of the record and the fact that the proceedings are not necessarily recorded.

She said her submission is that in the particular case Lewis was prejudiced or unable to present a case.

“How can you say that where he says Mr. Dennie has these records… and Mr. Dennie dies, Mr. Coombs comes and he is unfamiliar with the matter and wants to be able to represent him? He is not given that opportunity so he withdraws himself… The matter is proceeded with; he does not have the benefit of whatever is disclosed to Mr. Dennie. He is not saying there wasn’t, but there is a supervening event: Mr. Dennie died.”

But McDowall maintains that even though Dennie died in September, there was still that indication in October that Lewis was seeking time to retain counsel.

She said once the matter had started, there was nothing preventing Coombs from getting involved before the conclusion, adding that main witness could have been recalled.

“Except that according his affidavit that if I am not able to be given time, I am disassociating myself from this mater,” Justice Michel said, adding that that is not an unusual thing for a lawyer to do.

McDowall later conceded that if Lewis was denied the opportunity to sufficiently brief his counsel he should be allowed a retrial.
The chief justice said that is what Lewis appeared to be saying.

“Without proof,” the acting DPP responded.

She later said she sees the difficulty because the record of the lower court does not assist the Court of Appeal.

Justice Michel noted that the record says one thing, the clerk says another, including that she cannot say for sure.

“So it puts us in the position where what he has presented is not completely controverted anywhere, whether the record or the affidavit put forward by the clerk.

“My lord, I cannot urge the court any further than the record can allow me, so I will be guided by the court,” the acting DPP said.

Correction: An earlier version of this article has confused Justices of Appeal Louise Blenman and Gertel Thom. Justice of Appeal Blenman did not sit not the panel for this case.