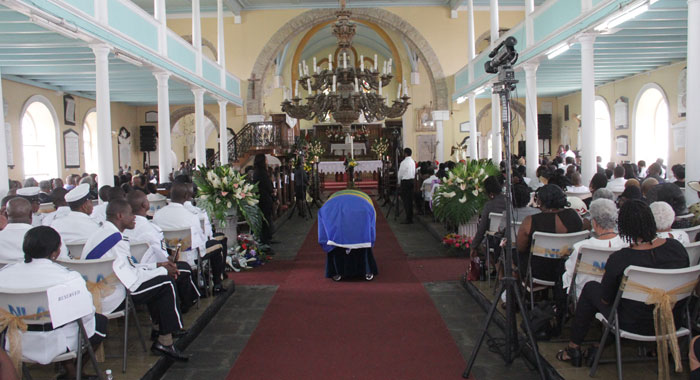 Prime Minister Ralph Gonsalves did not attend the funeral, last Friday, of former Member of Parliament for West Kingstown, John Horne over fears that he would have been booed, as had been done in July 2014 at the funeral of Elwardo “E.G.” Lynch, another New Democratic Party member.

He told Parliament on Thursday that he made the decision after the female host of a programme on NICE Radio last Friday afternoon, sought “to agitate persons to look out for me at John Horne’s funeral and to give me the treatment which was meted out to me at my friend Elwardo Lynch’s funeral”.

In July 2014, in Georgetown, mourners booed, jeered, and rang bells for almost 10 minutes as Gonsalves was called to deliver a tribute to his one-time friend, who became one of his staunchest political critics.

The jeering prevented the prime minister from delivering his tribute at the funeral and he later left and read it on his Unity Labour Party’s radio station, Star FM.

The prime Minister said that he did not attend Horne’s funeral although he had chosen to remain in St. Vincent and have Minister of Finance Camillo Gonsalves represent him at a very important meeting on security in Trinidad and Tobago so that he could pay his last respects to the fallen politician.

“Mr. Speaker, I regret that I did not attend the funeral. Of course, I made my tribute ion radio,” Gonsalves said toward the end of a tribute to Horne during the obituaries section of Thursday’s meeting of the national assembly.

He said he expressed condolences to Horne’s widow and daughters via the phone when they had met with the Cabinet Secretary and the team assembled for the official funeral.

Gonsalves was in Trinidad attending a meeting at the time.

“And on that day, on that Friday for his funeral, there was a meeting also in Trinidad, subsequently to the original meeting I was talking about, a prime ministerial meeting, a special one on security; a very important meeting.

“I agonised over it because I have my obligation to the living but I have to pay respects to those and for someone like John Horne.

“I finally decided that I will stay at home and I asked the Minister of Finance to represent me at this meeting in Trinidad so I could come both to the viewing here in the Parliament and to go to the funeral service at the Anglican cathedral.”

Gonsalves, however, said that just after 1 p.m. last Friday, the head of security at the Office of the Prime Minister that day informed me that on a programme at that time on Nice Radio, “the hostess, it was a woman, was seeking to agitate persons to look out for me at John Horne’s funeral and to give me the treatment which was meted out to me at my friend Elwardo Lynch’s funeral”.

Margaret London, an NDP activist, was the host of the NDP’s New Time programme on NICE Radio around the time that the prime minister mentioned.

“Well, I didn’t — you know those things about what people shout at me and say, those things don’t mean anything to me but out of a deep respect for the family and for the deceased himself, I decided to stay away. I didn’t want in any way for a handful of people, so agitated, to sully this solemn ceremony. So I want to put that on record…”

The prime minister said he has spoken to a few senior members in the NDP about the development.

“… and they themselves indicated that they had heard it. In fact, there is one person who he and another member coming to the funeral heard it and commented whilst they were driving and said why is this being done and that it was wholly wrong. I am talking about what was happening on the radio.

Yvonne Francis-Gibson, another MP under the NDP administration died and was buried in July 2018.

Gonsalves was among lawmakers from both sides of the aisle, including former leader of the Opposition Arnhim Eustace, who paid tribute to Horne during Thursday’s meeting of Parliament.

He was being treated for prostate cancer and other complications.

Horne represented West Kingstown from 1984 to 2001, when he lost to Rene Baptiste of the Unity Labour party, which swept to office, ending the NDP’s 17-year management of the nation’s affairs.

During his time as a Member of Parliament, Horne served as a cabinet minister, with responsibilities for education, culture, and trade under then prime minister, Sir James Mitchell.