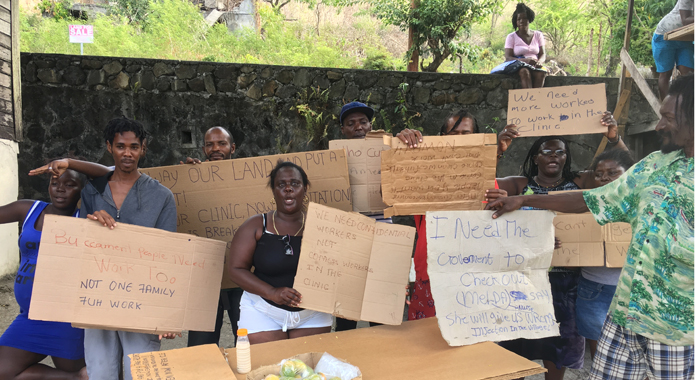 Protesters near the Buccament Polyclinic on Tuesday. (iWN photo)

A handful of Buccament Bay residents, on Tuesday, for the second consecutive day, demonstrated outside the newly-commissioned polyclinic.

The protesters said they are unhappy that no resident of the village has been employed to work there.

The comments from the protesters show that based on their politics, rather than qualification or anything else, they expected to be employed or turned away from a job at the healthcare facility.

“My issue is, I am a ULP [supporter]; I need a work, too. I see the people who are not supporting the ULP get work and it is unfair to us. I don’t mind they get work there but others need work too,” Yvonne Reid told iWitness News.

She said she thinks that political support is important in informing who gets a job.

“It’s very important because NDP workers working and we are not working. We are ULP supporters,” she said, referring to the main opposition New Democratic Party and the ruling Unity Labour Party.

Another woman who was selling snacks while on the picket line told iWitness News that she would not expect to get a job at the clinic because she is an NDP supporter.

She said the contractor hired her to clean the building before handing it over to the government.

The woman said that two other women, who she said were also NDP supporters, were employed to do the cleaning.

She said that while she does not support the ULP, she thinks that their supporters were being treated unfairly as none of them have been employed to staff the clinic.

The EC$4.5 million, European Union-funded polyclinic was officially opened on April 15 but is yet to open its doors to residents of the communities it is intended to serve.

At the official opening, health officials said that the polyclinic will provide emergency in-patient primary and speciality care that were available only at the Milton Cato Memorial Hospital, the nation’s main healthcare facility.

iWitness News understands that the polyclinic should have opened its doors to the public this past Monday, but health officials ordered that it be closed again because of the protest.

On Tuesday, Aphine Simmons, who was a candidate for the Green Party in the 2010 general election, but who villagers say voted for the ULP, told iWitness News that she was one of the “instigators” of the protest.

“The reasons we are protesting is that the new clinic is open, we have a lady from Buccament cleaning for 19 years, this year would be 20, and yesterday morning, when she came to work, she was not given any directive, only to be told that she no longer has a job,” Simmons told iWitness News.

“And I find that is unreasonable, unfair and she should have been told and informed beforehand that she no longer has a job, so she would know what to do.”

Simmons said residents are unhappy that no one in the village is among the staff of the healthcare facility.

She said that one person who lives in Buccament Bay, but is not originally from the fishing village, is a member of staff at the polyclinic.

Simmons said that residents feel “slighted because in everything we are always overlooked and bypassed for everybody else.

“No matter what is happening, Buccament is always overlooked and bypassed.”

She used, as an example, the river running through the village, which repeatedly floods homes along its banks during periods of torrential rain.

“However long ago, since 2013, they are saying they are going to fix the river and put in river defence for us. Vermont has gotten it, Leeward got theirs done, Country got theirs done and up to now, there is nothing in Buccament still,” she said.

“Every time rain comes, we have to frighten, we have to worry, we have to wonder, because nothing is done. That is [among] the main reasons why we are protesting. We are not protesting because nobody ain’t get no work, so people need to take that thing out their heads. It is just that we are always overlooked and bypassed.”

iWitness News noted that persons on the picket line were aligning their politics and employment expectations.

“The reason why persons are saying they are supporters and they didn’t get a job is because this other girl who did get a job is NDP and she is rubbing it in their faces and saying ‘Alyuh vote and alyuh up and down and look me geh wuk and alyuh dunce’,” she said, referring to one of the persons who was hired to clean the building before it was handed over to the government.

“That is the reason why persons are saying these things; just because of that,” Simmons told iWitness News.

She said the woman who had provided janitorial services at the old clinic for almost two decades was only reinstated after villagers began protesting on Monday.

Simmons said she supports the protest continuing until “something is done and we see changes”.

She said that Sir Louis Straker, Member of Parliament for Central Leeward, where Buccament Bay is located, telephoned her on Monday after the protest began.

“Well, Mr. Straker has expressed [that] the changes we are looking for, we will see it. But we still want to make sure that everything is done. So, as soon as we get that directive, we will stop.

“He spoke to me yesterday and he told me the young lady (janitor) will get back her job as of yesterday and he said the other matters will be dealt with. So, as soon as he calls me and say it dealt with [the protest will end],” Simmons told iWitness News.