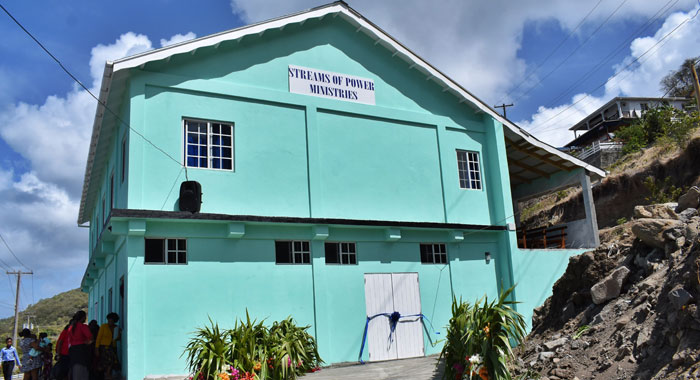 The new Stream of Power Ministries building in Bequia.

After 30 years of worshiping in the Society Hall in Paget Farm, the Streams of Power (SOP) Ministries has constructed and dedicated a two-story building for its congregation on the Grenadine island of Bequia.

Leader of the SOP Ministries Pastor Errol Daniel says that the new church building will redound to the benefit of people in Bequia who will use the facility to access spiritual and holistic help.

Hundreds of members of the church’s three main branches on the mainland, specially invited guests and well-wishers travelled to Bequia for the official dedication service last Sunday.

The service was also attended Leader of the Opposition and Parliamentary Representative for the Northern Grenadines, Godwin Friday and Deputy Director of Grenadines Affairs, Herman Belmar.

Giving a brief overview of SOP initial mission to Bequia which saw the both of the ministry on that island some 33 years ago, Carmalie Daniel explained how she led a missionary trip comprising 60 young people who distributed gospel literature during the day and conducted street meetings at night.

She said that out of that, many persons on the island came to accept the gospel and soon after they started their ministry there, conducting weekly services in the Society Hall, which is located upstairs a shop in Paget Farm.
Daniel further explained that after several years, the ministry purchased lands in Bequia to construct a church building but continued to worship in the Society Hall until last Sunday when they held their first service in the newly constructed Building.

Bringing congratulatory remarks at the dedication service, Friday said that the SOP Church is an important part of the Christian community in Bequia and has contributed significantly to the development of the people of Bequia and St. Vincent and the Grenadines.

The opposition leader said that the Church has been a shinning light and challenged its leadership and membership to continue to be a “moral compass to help the nation chart a safe course through the storms of life”.

In his congratulatory remarks, Belmar said it is his feeling that new SOP building will be one of the most magnificent buildings where the presence of God will dwell and where the people on the island can go for overall development.

Belmar reminisced of years where institutions like churches would leave their doors open and people would walk off of the streets with reverence and a majestic fear for God to receive help at different times throughout the day.

He, however, noted that because of the moral decline in society, these institutions have been forced to lockdown to protect against theft and vandalism.

Belmar expressed the hopes that the new church would find a way around the issue to help people in this regard.

The featured speaker at the dedication service was the Reverend Jewell Calendar, senior pastor of The People’s Cathedral in Barbados.

Former pastor of The People’s Cathedral, the renown late Revevend Holmes Williams, was a long time close associate and friend of Pastor Daniel and the SOP Ministries.

Minister Peter Williams, the son of Holmes Williams and a contingent from The People’s Cathedral also travelled to Bequia to celebrate the dedication of the new church.

In her stirring address, Calendar said that there are those who would question the move by Pastor Daniel to construct another church at a time when statistics show that the church in the western world is in a state of rapid decline.

She said that churches in Africa, Asia and the Arab nations are under severe persecution.

He noted several instances where we have seen the escalation of attacks against the church, including the bombing of three churches in Sri Lanka last Easter.

Calendar said that while these are legitimate concerns to have as humans, the word of God assures that the responsibility of the church rests on Jesus Christ and, as such, the true church will continue to advance even in the face of persecution.

She further said that while the church continues to advance, then places of worship must be built where people can come to be nurtured and discipled.

She commended the SOP Ministries for continuing to do their part to counteract the moral and spiritual decline that has been unleashed in the world today.